We’ve hit that time of year where Winter becomes Summer and that is reflected in our fishing. Shore sport dies away, unless you are a spinning or float fanatic chasing the gars and boat sport increases with some verve! Mackerel have appeared very early with even a few reported around the Breakwater whilst going for garfish. Some of the gars have been up around the 1lb 8oz mark. I would expect to see more pollack towards the end of May but even they have been early, showing around the rockier marks. Bass never seem to disappear now and are always an achievable target so for the light line shore angler there is plenty to go for and as the water temperature increases there will be no shortage of fish. On the bottom sport is not ideal as we have had the best of it but it will still consist of small black bream and bass with the chance of an odd plaice. There have been reports of a few plaice showing but with the lack of angling effort, reflected in the bait sales, it is hard to truly show what is about with any degree of accuracy although I do believe the fishing is a lot better at times than is portrayed. Night time should see some huss and conger, with any of the three main ray species, blonde, undulate or small eyed, definitely worth a go if that is your sort of fishing. 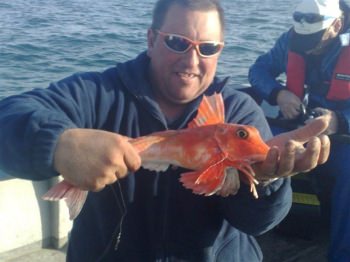 However it is the boat sport that really instils life in in the all round angler. Turbot and brill have come up on the banks now with some fair bags of fish. Last year the fish came up early and we missed the best of it, I am hoping this year that this run of fish is the real start of some good sport for the next couple of months at least and not false hope. It is what I have been forecasting now for a couple of months based on water temperatures through the winter so we will see what happens. Best fish I have heard of is 20lb with a smattering of doubles already recorded in the first couple of weeks. As is typical of this time of year the turbot out number the brill but most boats seem to be managing to both species. If flatty fishing isn’t energizing enough for you then there are plenty of tope to go for. Fish to 50lb reported with tides producing up to 20 fish which makes for frenetic action. There are marks where you can either anchor or drift for them. You’ll also likely encounter bull huss when they get a chance to snaffle a bait, some nice fish about too with many in double figures. Wrecking this side of the Channel is hit and miss, the fish are there but ‘chocolaty’ water is causing a problem with sediment rising off the bottom on the bigger tides. When the tides are small the fish don’t feed so hard but if you can find tide and clear water then there are fish to be had. Peace and Plenty found enough pollack to 16lb to keep her crew happy on the way across, also a bonus cod of 20lb and this is typical of the wrecking we are getting which should last till the end of August. 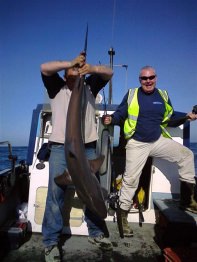 As many of you will know by now Alderney has a new charter boat, Colin Dukes has moved his boat and operation here from Exmouth. Smuggler is now a 33’ Lochin which suits the islands waters very well. At the time of doing this report only a couple of trips had been done but with a certain degree of success. Pictures of some of the fish are posted in the Alderney boat report from yesterday. Colin has 30 years of experience around Alderney waters so certainly has an upper hand on most visiting charter vessels, it’ll be interesting to see what he conjures up over the forthcoming months. Smuggler is also Daiwa sponsored so Colin is able to provide top notch tackle which will make your travelling to the island all the more easier.

The Harbour Lights used to be the hub of all angling gossip up until its closure three years ago. Now under new ownership it has been totally knocked down and re-built. Everything is brand spanking new with ample rooms, a new bar and restaurant too. For those long summer evenings there rear of the property has 5 levels and the upper terraces are not only sun drenched but provide fantastic views across the harbour. To book you can ring Steve on 07781 135616 or look at his website www.harbourlightsalderney.com

A quick reminder on the Festival for those of you that visit, dates are 17th to 25th October. Now is the time to book the cheaper flights and sort your accommodation / car before it all gets booked up. If you’ve never been before but fancy it get in touch to find out more.

In the meantime, thanks to those of you that do visit the island especially at the moment with all the doom and gloom financially but I can’t think of a better place to escape it all for the time being. Tightlines!