“Grifting” Around The Sound

Today was not an easy day.  With fabulous weather and good tides the day had potential, but the Spring months can be notoriously fickle and we had to work really hard to find some fish.

Having picked up a variety of fresh and frozen bait at Clives Tackle & Bait in Plymouth, we set out from Queen Anne’s Battery Marina and headed straight for a wreck some 4 miles south of the Plymouth break water.  The guys at Clives’ had told us that there were no signifcant numbers of mackerel in yet, so we didn’t try for these.  When we arrived at the wreck there was another boat drifting it and they had caught some pollack in the previous half hour.  As we set the drift up they netted another nice fish, not double figures but the sort that goes very well on light gear.

Well the first drift saw me lose my gear instantly in the wreck, and as I was some 25 turns of the bottom it must have been the very top of the superstructure I snagged!  After this the tide went very slack and we only managed to catch a couple of undersized whiting.  We could see that the other boat was also struggling to catch so we decided to move on to try something else.

We headed off to the Eddystone reef.  As we had some fresh rag worm I wanted to try for a large ballan wrasse.  We spent around an hour drifting the reef and although there were no ballans I manged to catch five or six nice cuckoo wrasse, although none of any great size.  Pops tried some feathers in case there were some mackerel.  Whilst he didn’t find any mackerel he hooked an enormous launce so the summer can’t be far away! 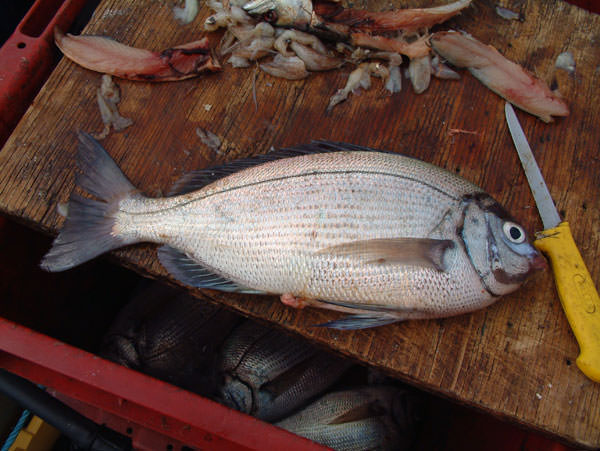 As the tide started to pick up we moved to the south of the light house, stopping at a couple of wrecks marked on the chart but without finding them!  We then went directly to a nearby wreck we have fished before.  Again, there was another boat – “Adventure” – drifting the wreck.  They were catching some nice whiting and as we arrived we saw them land a “monster”!

The first drift and I had a run with a small pollack, but at least it was a proper fish!  Pops was perservering with baited feathers looking for a whiting.  The second drift, and I had another run!  This time I could feel that it was going to be a better fish and on my 10lb solid carbon rod and small multiplier it gave a very good account of itself in the spring sunshine.  The result was this nice inshore wreck pollack.

The pollack then went off the feed.  I switched to a flowing trace with a small hook and squid tipped frozen mackerel.  I started to get lots of very small bites but only managed to catch a couple of very small whiting.  Taking a longer drift however beyond the wreck threw up a surprise.  Pops caught this excellent cuckoo wrasse on a mackerel baited feather.  It weighed 1lb and 4oz, 125% of the local specimen weight.

Again, with the fishing remaining slow we headed east to the Rutts.  We fished another wreck without success and then tried the reef.  We had instant success with three small pollack on the first drift, but then no bites after that. With one more wrasse to round off the day we headed home.  It is a feature of this time of year that despite the sunshine, once 4 o’clock arrived the temprature dropped dramatically and we were glad to get back to the dock.

On the way in I snapped these pictures of the Mew Stone and Plymouth Hoe in the sun shine…….hope you like them!

Thanks to Steve Parker for the report – http://www.madpolka.co.uk