The Home International Boat Championship is an annual event that sees the International Teams from England. Ireland, Scotland and Wales facing off for the coveted title of Home Nations Champions. Always keenly contested, I would be a liar if I said that there is not intense rivalry between England and Scotland in particular. A two horse race this is not however, as last year’s winners, Wales, would be quick to testify. 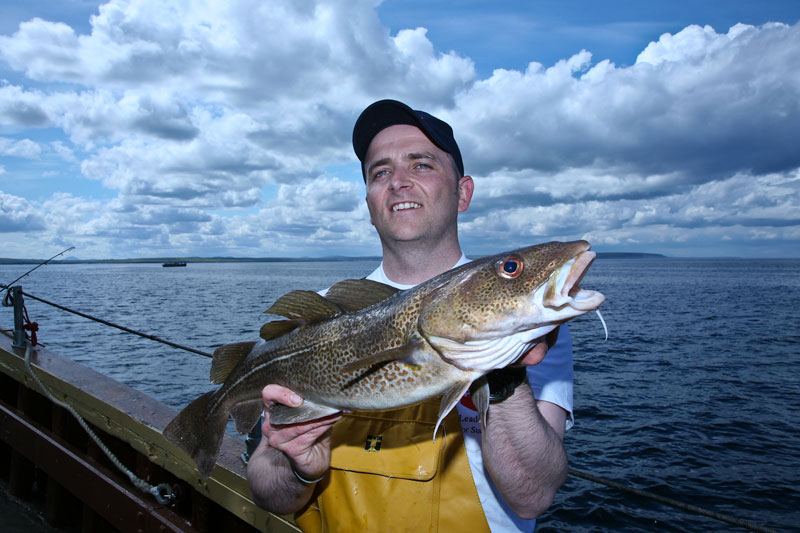 Two match days are preceded by an official day of practice, where teams and their entourages get to final grips with the match venue and fine-tune their fishing strategies before the serious business begins.

Scrabster, near Thurso in the far north of Scotland was the venue for this year’s event, and all teams arrived early to work through some additional practice sessions. Teams consist of five anglers who are allocated pre-determined draws over three boats each day. Drifting over rough ground for a mainstay of cod, pollack, ling, wrasse and coalfish was envisaged should good weather allow access to the nominated fishing grounds on the eastern side of the venue off the face of Dunnet and around into Brough Bay.

Lure and pirk fishing can be very productive on this venue but effectiveness depends on clear water conditions and a decent amount of drift. Bait fishing on the other hand works consistently well, and leaves lures for dead when the water is thickly coloured due to rough seas and sustained heavy rainfall. 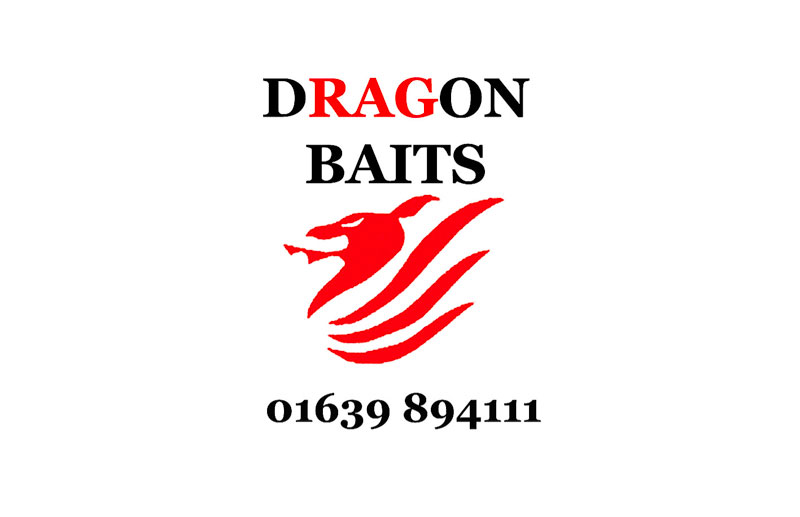 The host country – in this case Scotland – must supply all competitors with equal amounts of the same baits; these are issued to team managers each morning before boarding the boats. Each angler was provided with 30 medium-sized Dragon Bait farmed Welsh ragworm, around 30 fresh unshelled mussels, and frozen mackerel.

This was a catch-and-release event fished to a NO size limits ruling. As Scrabster has the potential to deliver large numbers of fish, the thinking here was that if fishing became busy then fish could be recorded and immediately returned to the sea without delay. No size limits also cleanly removed any potential for ‘legal’ manipulation of a fish on the measure, or indeed debate or over whether a fish was a counter or not. In short, anglers would be rewarded with points for all fish caught. 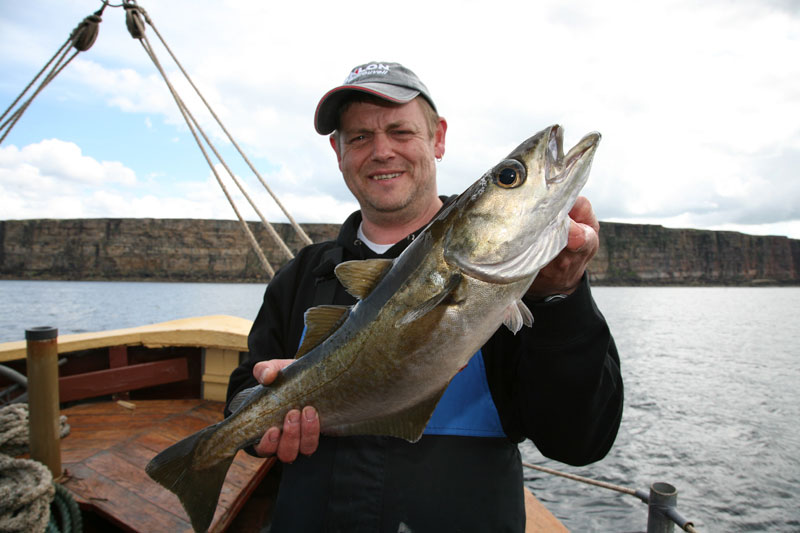 The points system was a very simple one: Cod and ling would score 4 points, pollack would score 3 points, while all other species were worth 2 points apiece. Mackerel, herring and sandeel were not eligible for points. The angler scoring the most points on each boat would be awarded 100%, and the other anglers’ points would thereafter be expressed as a percentage of that top score. Each country’s percentage points from the three boats would be added to give the team scores at the halfway (end of day one) and final stages. Two boats would carry two anglers from each nation, while the third boat carried only one angler from each team.

Practice sessions went well for all nations with cod featuring strongly. Good numbers of ballan and cuckoo wrasse, and modest ling were also taken over the rough ground, with fewer than expected pollack and some coalfish. Those boats sampling the fishing in the ‘Emergency Weather Zone’ of Thurso Bay found lots of dabs with a few plaice, dogfish and gurnard.

Final clarification of rules and notification of which anglers would occupy what boat positions was sorted at the managers’ and team captains’ meeting on the eve of the event. The weather forecast for the match days was superb with calm seas and no small amount of sun predicted. Much as this would be good for topping up suntans, there was the concern that lack of wind could mean boats might not cover the ground as well as they might. Hard rock and kelp blanket most of the designated match areas, and good coverage brought about by wind-assisted drift is largely the key to better catches. 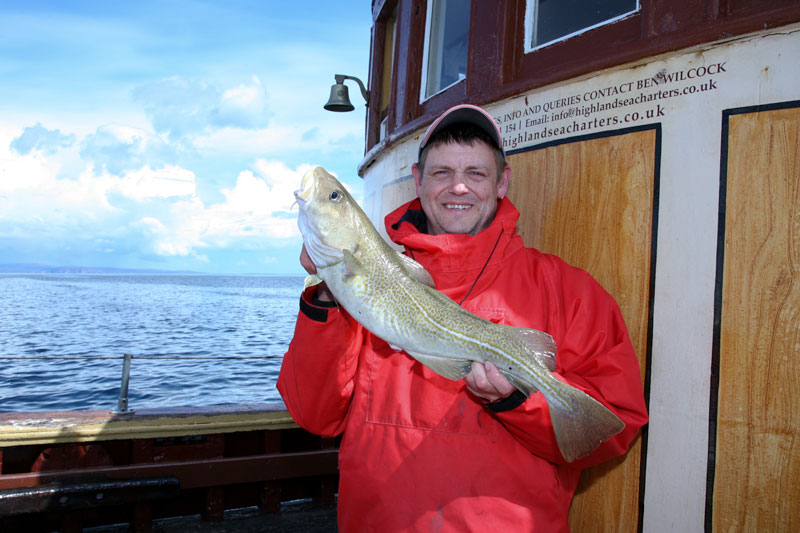 While two boats headed straight for the early tidal run round in Brough Bay, one of the boats suffered engine problems en route before a line was wetted. Such things are sent to test the organisers, and an alternative boat was mustered while the afflicted boat and her anglers limped back to Scrabster for decanting. This meant that while two boats would finish fishing at the appointed time, additional time had to be allocated to the replacement boat in order to give the anglers the full six hours fishing time…it would be a long day for the anglers on Stormdrift!

The best of the tide had gone by the time Stormdrift stopped at the Dunnet grounds. This was of no consequence however as the fair points system ensured that the top angler on the boat would score 100% regardless of whether big numbers of fish were located or not. 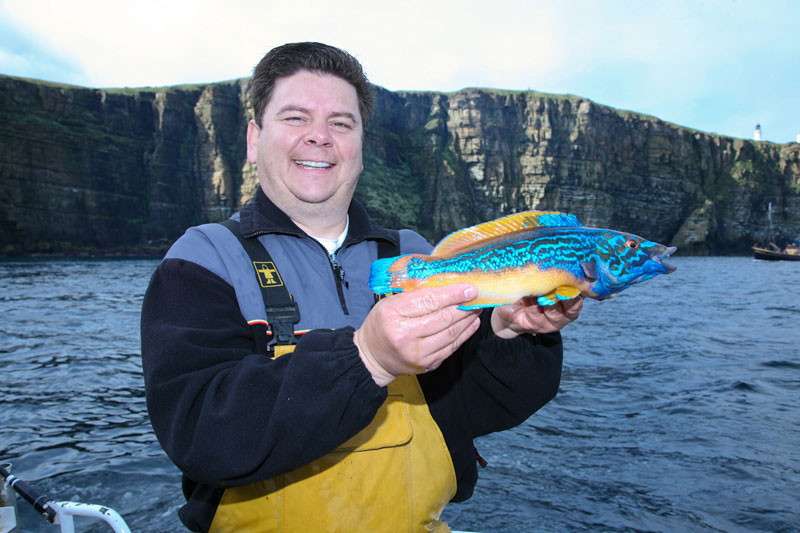 Cod, pollack, ling, wrasse and coalfish were the main species boated but numbers were down on practice, with the fair weather and lack of wind largely responsible. That said, all boats were keenly contested. Scratchy conditions meant that bait fishing with the Dragon ragworm and mussel was the most profitable approach on Honestas and Stormdrift. However, Hebridean Warrior found numbers of coalfish and England’s Mike Patten topped that boat with more than 120 fish for 100%, with Scotland’s Scott Gibson hard on his heels with a 95% score.

It soon became apparent that England and Scotland had turned in the most competitive shifts across all three boats. Unusually, Scotland’s Bryce Watson and England’s Cliff Newbold tied for top slot on Honestas, giving them 100% each. Tellingly however, on the same boat, Derek Yuille of Scotland recoded 99.05% against Dave Shay of England on 75.24%. 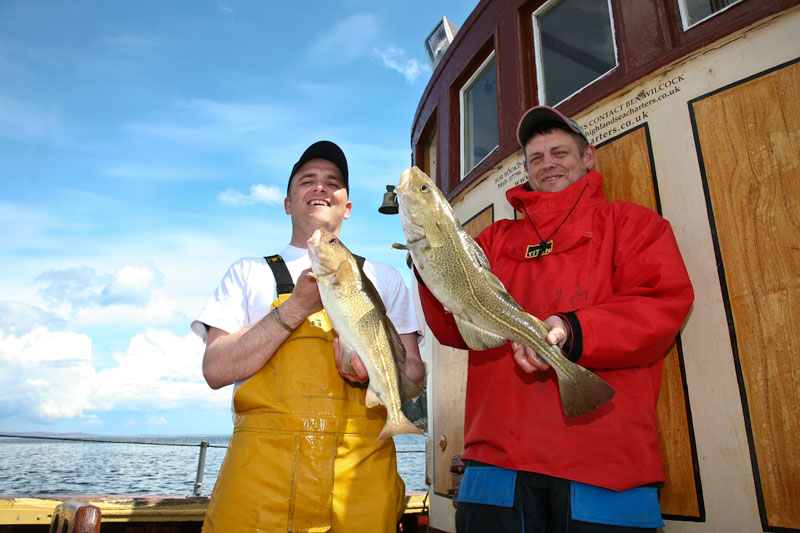 Anglers on Stormdrift returned to port some three hours after the other boats and had no idea of how their teams had collectively fared elsewhere. Scotland captain Steve Souter took the 100% on Stormdrift but the combined scores of the two England and two Scotland rods were closely matched.

The first day computer-generated standings posted that evening at the event headquarters read Scotland 455.75, England 449.71, Wales 308.29 and Ireland 240.12 points. It looked a straight fight between England and Scotland going into the second half of proceedings. Scotland’s lead was a narrow one and they could not afford to relax if they were going to maintain their position.

Coalfish featured far more prominently on day two on all boats, but the single-man boat enjoyed the biggest numbers and arguably the best fishing of the whole event. Scott Gibson used a secret colour strain of Red Gill eel specially developed for the Scottish team and tallied 183 fish for 100% on Anitra, this time ahead of Mike Patten by almost 16%. 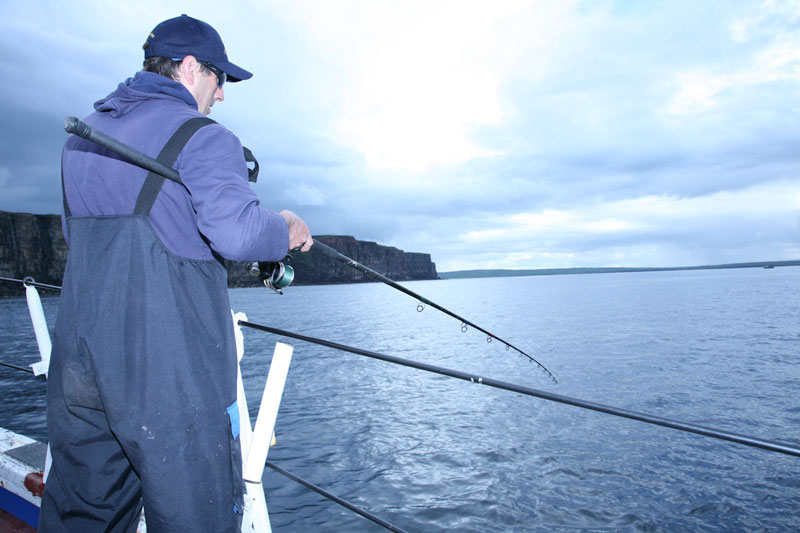 Steve Souter and Donnie Morrison jointly scored 169.67% over England’s Gary Galbraith and Steve Clements on 167.42% in what was a superb battle and an excellent example of teamwork from both camps.

The VHF radios fizzed with conversation on the journey back to port. The word was that Scotland had won but no handshakes were exchanged or congratulations were accepted until the result was officially confirmed. An adverse result on any one of the boats could alter the lead standings

On the Honestas, news filtered through that Scotland team members Derek Yuille and Bryce Watson had returned a combined score of 164.29, which was spookily identical to the collective efforts of England’s Cliff Newbold and Dave Shay of England.

Confirmation of a Scotland win was quickly given on the quayside, with England manager Ray Ashby and his team first to offer their congratulations. Scotland received their Gold medals from the president of the Scottish Federation of Sea Anglers, Mike Horn, at the presentation dinner later that evening. Home International attention now turns to Ireland and Belmullet, the venue for the 2010 event.

Full results can be viewed here. 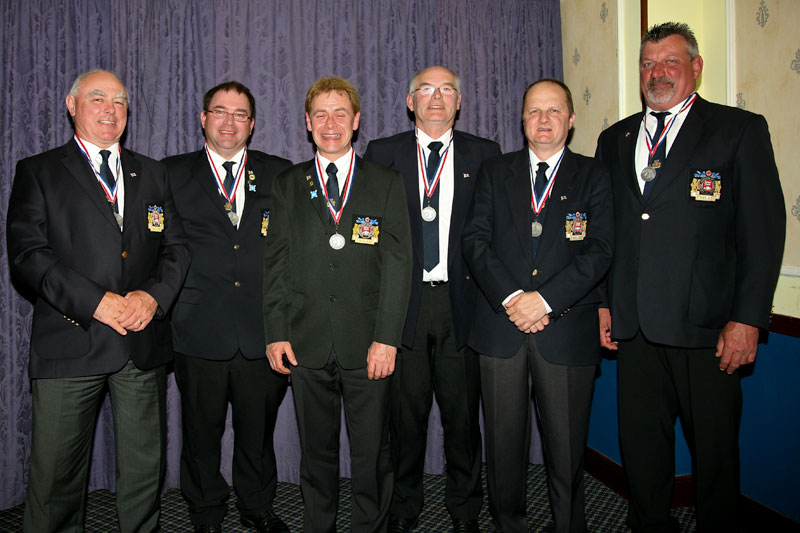 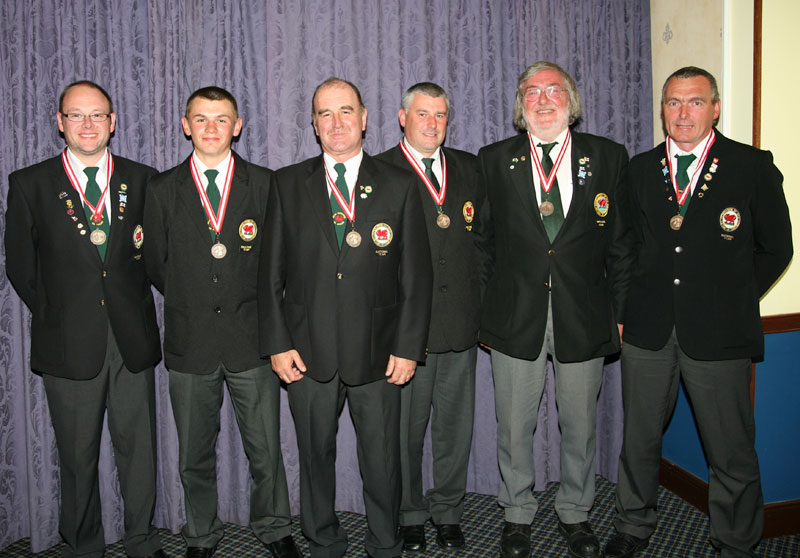 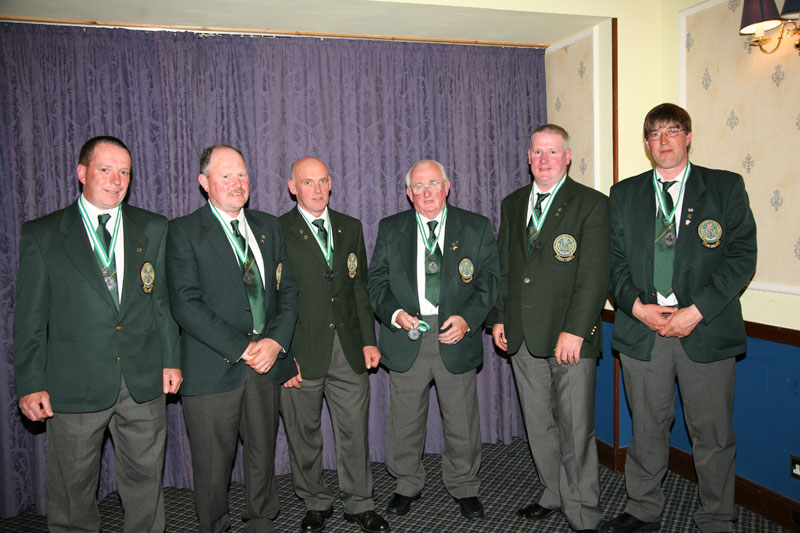 In no particular order, Red Gill Team Scotland wish to thank the following for their invaluable support and assistance, without which the staging of the 2009 Home International Boat Championship at Scrabster would have been impossible.

Dragon Bait: Thanks to Richard and Cath and the rest of the team at Dragon Bait for pulling out all the stops with the ragworm. Provision of a uniform size of high quality worm, pre-portioned for distribution made the organisers’ lives so much easier than otherwise might have been. Scrabster is a logistical nightmare in anyone’s book, and delivery of live bait from Wales to the far north in under 24 hours is some going.

Red Gill fishing lures: Thanks to Steve Howard and Alex Macdonald for their help and support, particularly on the adjusted lure colours which proved excellent. The Scotland team used Red Gills exclusively and recommend the new 115mm and 70mm orange and firetail colours in particular.

D. Stevens & Son: Thanks for the use of their cold storage facilities at Scrabster harbour, and for suffering the comings and goings of the bait maintainers.

The skippers of Silverline, Hebridean Warrior, Honestas, Stormdrift and Anitra for all their efforts both on the team practice sessions and during the event proper.

The Weigh Inn Motel, Thurso for looking after all the teams.

Extra special thanks goes to Skipper, Geordie King for stepping in at short notice and saving the day when sod’s law dealt the organisers a boat breakdown.

How to construct a super-fast line stripper