ALDERNEY species mission: 40 plus and counting

Species-chasing Mark Harding tops a landmark 40 species en route to what he hopes will be a magical final year’s total of 50… or maybe even more!

Back around last Christmas I was searching for fresh fishing inspiration for the year ahead. What I came up with was a special challenge to catch 50 different species on rod and line from around Alderney’s magical coastline. With only 10 miles of coastline to go at, and even with the boat and kayak fishing options available to me, this was always going to be a tough proposition, but it was exactly what I needed to motivate me. 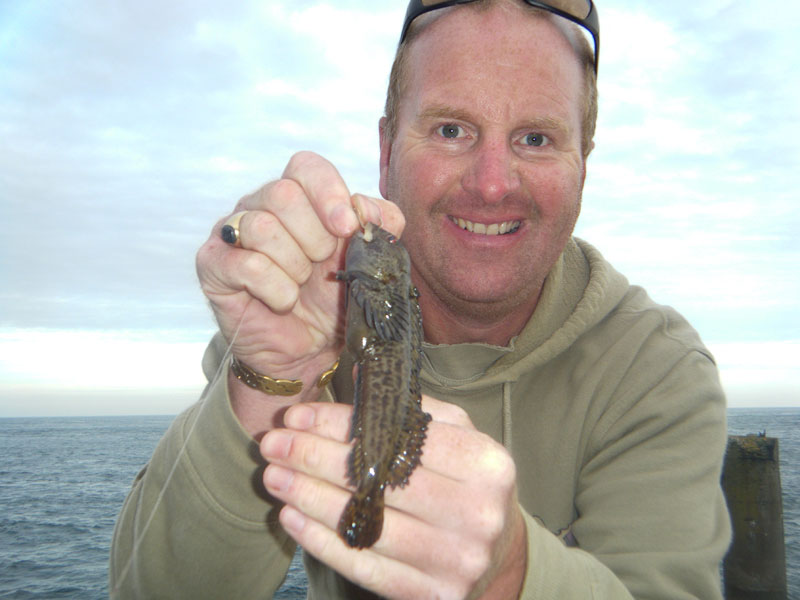 I had managed 30 species by the start of the summer and I had high hopes of racking up more species during the normally excellent full summer period. May and June provide many fishing opportunities and my target was to get my numbers up in to the low forties by the beginning of August. I also hoped to ambush some migratory fish and perhaps add one or two rather obscure Alderney-area species.

A humble blenny caught while wrassing notched the species count to 31. My new boat arrived from the US during May, and was the tonic and tool to drive me on. With the boat readied for action I went straight for the jugular and blasted offshore. Gurnards, sandeel, tope and huss were on my hit list, and nearly all were achieved without difficulty. However, I failed to catch a gurnard despite one being caught by another angler on the boat. We went on to have a cracking morning on turbot and brill, but by far the biggest cheer came to me for catching a sandeel. My buddies think I am a tiddler-snatching fruitcake… and they are probably right!

An afternoon move to reef grounds rewarded me with a 25lb tope on the very first drop. Attention then turned to tempting a bull huss. Downsizing the baits brought a procession of tope and desperation eventually forced more me to extreme measures. I dropped right down to a size 1/0 hook baited with a piece of mackerel. I didn’t have bundles of faith in the move but the speculative switch came up trumps and I reeled in one of the smallest huss I have ever seen. But they all count in this race. 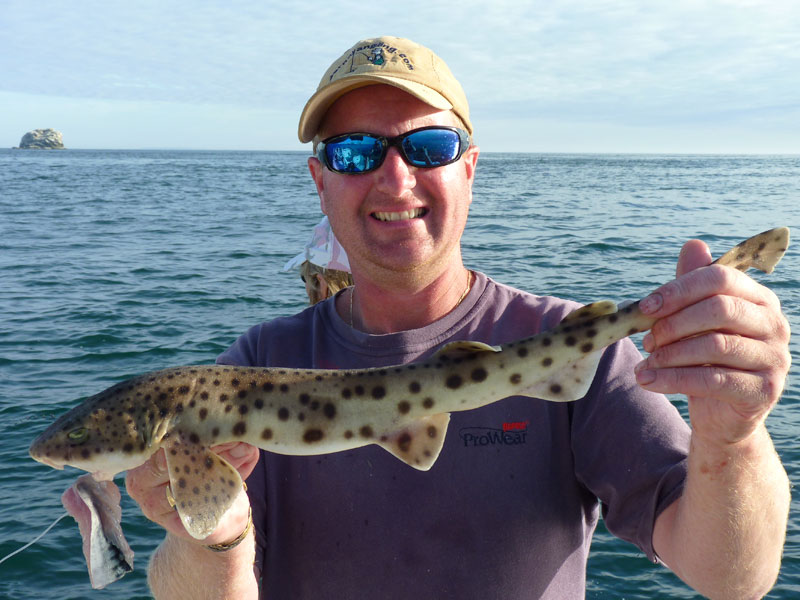 Blonde and small-eyed ray, and red and tub gurnards had yet to come my way. All are realistic targets and there’s a small patch of ground just outside the harbour frequented by all four species. Conger also live on this ground, and different species numero 35 was a modest eel. The rays eluded me at this time of asking but a cracking red gurnard ensured that I kept my pecker up.

A few fruitless trips hunting ling on the wrecks followed, before a little snippet of information diverted my attention. The suggestion was that there were odd pockets herring offshore around… and I wanted one. With wind, weather and tides in my favour, 05:30 saw me up and at it on an early morning shot. I left with fingers crossed for just one herring. 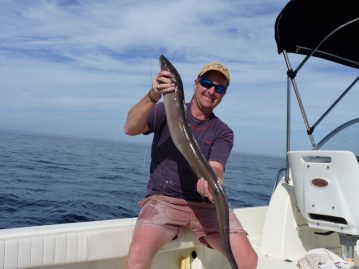 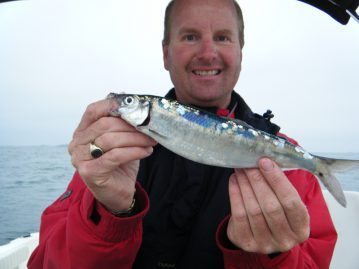 As it transpired I found 14 of the tasty little blighters and bagged a bonus whiting too. The scene on the boat was that of a lone ginger madman body popping and punching the air. Jubilant, I did think about doing it naked but reined myself in and refrained… perhaps next time loyal readers! With another two species in the can my thoughts turned back to the missing blonde ray, ling and tub gurnard, the lack of which were thorns in my side.

A week later I was out drifting the banks on a small tide again, this time with my mate Gary. We enjoyed a cracking little session with turbot, brill and bass, and I even pulled out a rare tub gurnard. We left excellent fishing behind as my species-chasing obsession saw me sticking to the game plan, which was to move a relatively short distance and target a thornback. This was always a long shot, but given where we were I had to give it ago on the small tides. After five hours of perpetual weed and 30 plus lesser spotted dogfish my ears were shredded from Gary whingeing and muttering. He did have a point though.

On my next session I fished a slack for ling that proved a waste of effort. I then motored back to the harbour mark and nailed the small-eyed ray. As species number 40, the fish marked a personally rewarding milestone in this year-long fishing assault, and we were only half way through June. 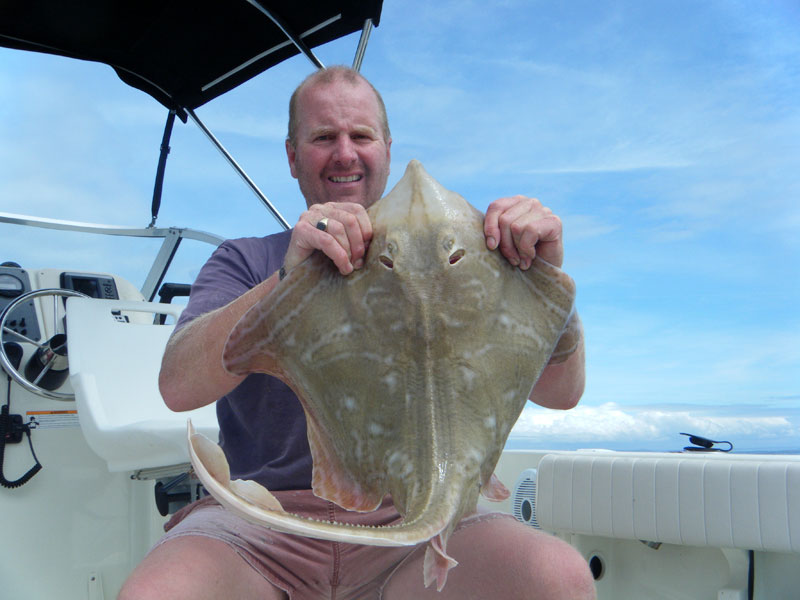 Two weeks later on a cracking day to be alive and afloat I did nail an excellent ling, followed by a 70lb conger.

My next boat trip revolved around my good mate Lee Rossie who came visiting. I needed to show him the Alderney ‘thing’ of turbot, brill and bass but at the same time I needed to be a little selfish in at least trying to claw out some more species. Lee’s first day was a blustery one. I chose to fish behind the breakwater wall, which would give me a chance of a couches bream and a blonde ray. 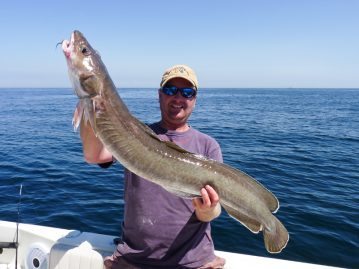 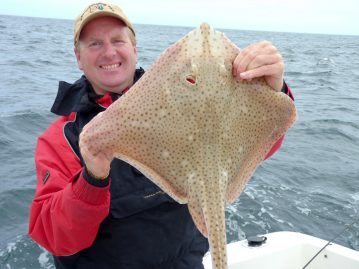 The wind increased dramatically towards slack water, and with the tide ebbing this was impossible in a wind over tide situation, so at slack water I made my move for just 20 minutes of fishing. On the second drop, as the flood tide gained momentum, I hooked in to something solid. I speculated it was a blonde ray, and as I wound every inch of braid back to the boat I prayed the hook would hold in the strengthening tide. Lee quickly slipped the net under a perfectly marked blonde… just as well, because with the roaring strength of tide we couldn’t get baits back down to try again! This was a good day, and that marked species 42.

My attentions next turned to wrasse and minis. I had corkwing and ballan already; now I needed wrasse of the rock cook, a goldsinny and a cuckoo varieties. The rock cook was my first target on an evening session at the end of the breakwater. As fate would have it there were lots of wrasse hitting my baits and I eventually managed to score with a cuckoo. This was unexpected because although I have seen an odd one from this mark, they are certainly few and far between. Still upbeat, I returned to the breakwater the following night and bagged both the rock cook and the goldsinny. This was the first goldsinny I have caught here, and I went one to catch a hat trick. 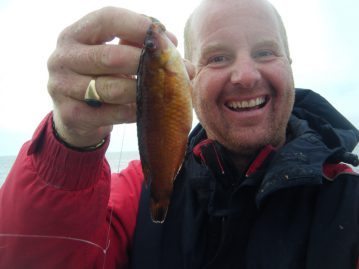 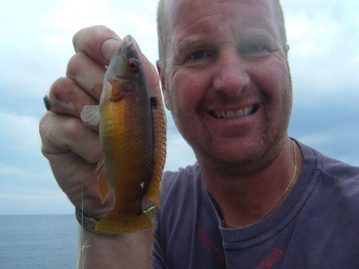 With my wrasse mission accomplished I moved to the inner harbour to seek out my three-bearded rockling nemesis. My third cast resulted in a distinctive pull. I fed out a little line and then struck into some definite resistance. I released some more line, and when I clearly felt the fish move away, I struck. The scrap was on, and by now my partner, Fieona, joined me. I was just about to give her orders for the drop net when the fish came to the surface. It was no three bearded rockling but a cracking silver eel! What a rarity and what a bonus. Fie drop-netted the fish up the wall, and I was in ecstatic species-hunting heaven… what a rewarding couple of hours! 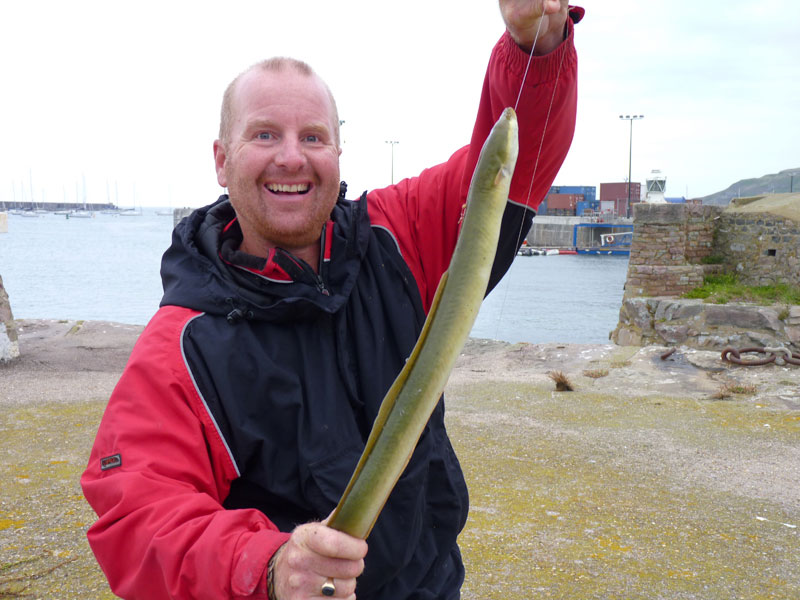 With 50 species now looming, every success from now to the finish line becomes major. Next on my hit list was a return to the couches
sea bream. They start to show up from the end of June but never in any significant numbers, but I had heard of two recent couches captures. I continued to fish my favourite mark and my faith came good at the end of July. I struck at a screaming ratchet run, and played a gloriously coloured couches into the waiting landing net after a tense five minutes of hanging in there against the power runs that are so trademark of these bullish fish. That marked was species number 47, and tantalisingly close to glory. 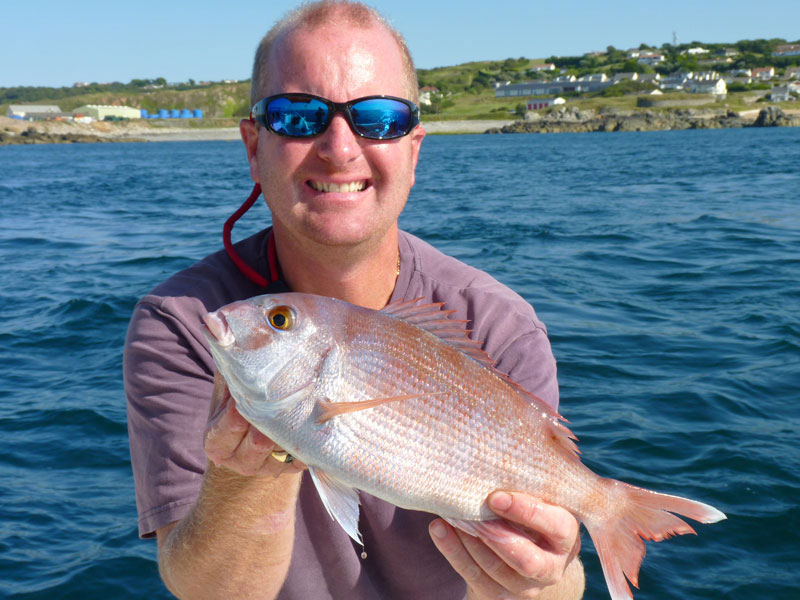 Other than sole, my remaining species targets are difficult ones. The task requires seeking out fish I have never caught before, and I may well be chasing uncertain shadows but I will give it my very best shot. I am nine months in to my personal mission to reach 50 species from the waters surrounding Alderney and I can’t quite believe that I am nearing the finishing line. With just three months remaining, I am as pumped as I was at the very beginning. Whatever happens, the next few weeks will no doubt serve up their share of frustrations, but this will be tempered by the excitement that has fuelled my continued desire to make this happen and prove that I am not actually off my nut. Until next time then my friends.