John Popplewell takes us on an outing to St Osyth in Essex where he and a couple of fishing friends target the ever popular, early season thornback ray on this favourite venue.

St Osyth beach nestles serenely on the Colne estuary in Essex; the beach separates into two sections for the angler, offering varied ground to fish on. You approach the beach through Hutley caravan park and the road suddenly ends leaving you in a small car park, in front of the sea wall. Looking over the wall you will see to the left rocky out-crop bays and to the right a wild open Essex beach, with sand dunes and marsh land behind the tide line. The beach here is fishable up to the Nature Reserve and after that is private, a word of warning travel light as it is a good 20 minute walk to the reserve and it can be heavy going under foot. But like anything worthwhile the dividends can be worth it.

St Osyth beach is primarily a summer venue, with thornback rays moving in to breed from the middle of March, giant stingrays appear in May and stay for most of the summer, plus if you have plans on targeting a big bass this is the place to be. The autumn and winter months will see those large shoals of whiting appear, but funnily enough not so many codling are caught from here.

May in St Osyth usually is hit by an influx of the dreaded may-weed. It is caused by the sun’s rays on the water producing a spurt in the growth of the algae resulting in a widespread bloom, similar to that you will see in reservoirs. It doesn’t stay for more than a couple of weeks, but when it’s here it can cause big problems for the angler. It manifests itself as oily globules that cling to the line, weighing heavy and pulling break-out leads from the sea bed making fishing almost impossible. The good thing is that this only tends to happen on the ebb tides, flood tides are still quite fishable.

The crab life here in the summer can be quite devastating, and worm baits can be obliterated in minutes, but peeler crab and squid baits will last longer if you lash them on with elastic cotton. The rays here tend to feed on most of the flood tide; the ebb tide is usually the 3rd and 4th hour down. 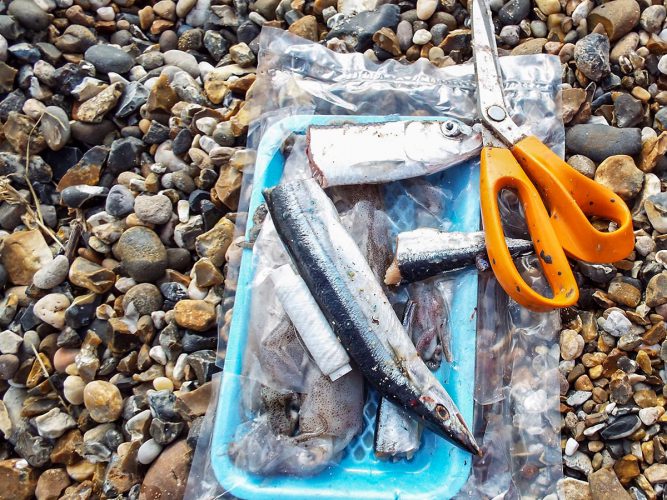 My trip had been planned the week before and I was meeting up with Richard Burt, well known on the match scene, and Kevin Blears who runs East Coast Rod Builds. I had been informed that the rays had moved in close to the shore-line and hopefully within casting distance. The weather forecast was for strong westerly winds which would mean it would be blowing off our backs assisting our casts and would help those leads go that little bit further.

Dawn broke and rods and gear were packed in the car and I was soon driving through the quaint village of St Osyth. Kevin was already in the car park with cup of tea in hand and we both popped our heads over the sea wall to be greeted by a strong southerly side wind. Not conducive to long distance casting but Richard soon joined us and we headed down to the beach.

Out came my trusty 13ft Flick Tips and Diawa 7HTs – a great combination for this type of fishing. The end tackle comprised 1/0 Kamasan hooks on pulley rigs. The ground here is not particularly rough, but there is the odd rock or two that could snag your tackle and ray, so pulleys would be the order of the day.

Baits were squid, blueys and sandeels, all thornback favourites and with the bonus of being easy to obtain from local tackle shops. I had decided to only use small baits and to try and punch the leads hard and low through the strong side wind. We had picked a small tide with high tide at 9am, so holding the grip leads in the tide would not be a problem.

First cast with a squid bait saw a bite almost immediately which resulted in a whiting. Not the chosen species and by the looks of the other bouncing rod tip that also had a whiting hanging on it. 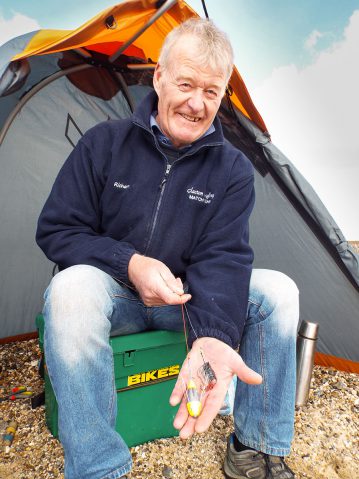 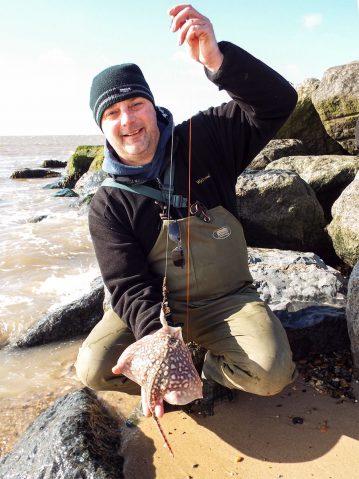 Kevin had chosen to fish the other side of the rocky groyne to me. I couldn’t see him, but he said he would give me a shout if he hooked into something interesting and it didn’t take long as I heard a yell “I’ve hooked a ray”. He certainly had, a perfectly formed thornback, all of a pound in weight. At least it proved we had thornies in front of us.

To be honest the first couple of hours of the ebb produced whiting by the bucket load, they were giving the would-be rays no chance of finding our baits. Kev picked up a live herring that beached itself in front of his tripod, and now we are talking prime ray bait! The North Sea has been full of them all year, and as he didn’t want it I was soon slicing it up ready for hook baits. 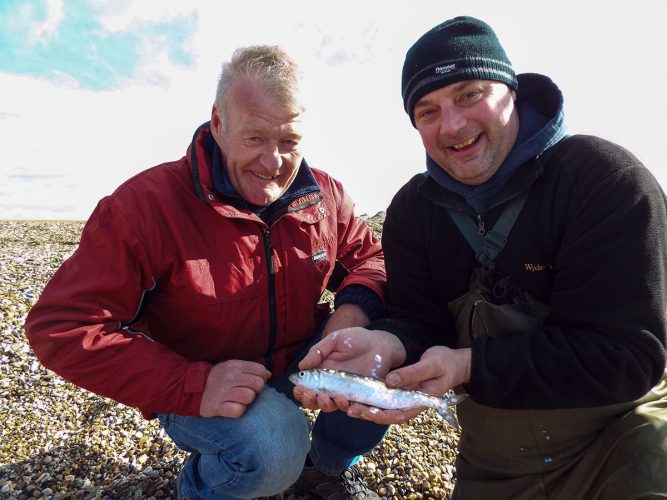 Richard was also pulling in whiting like they were going out of fashion, if he had been match fishing he would have been leading by miles. The third hour down of the tide had arrived and the run had eased, this is usually the crucial time for rays to start feeding, prime time for some serious fishing.

The bite when it came was just a couple of knocks similar to the whiting bites that I had been getting, so as I was sitting on the tackle box baiting up I carried on, with one eye on the rod and the other on what I was doing. The rod tip slowly pulled down and carried on going, leaving me no option but to drop everything and grab hold of the disappearing rod! No need to strike the fish as it was putting a healthy bend in the rod without any help from me. 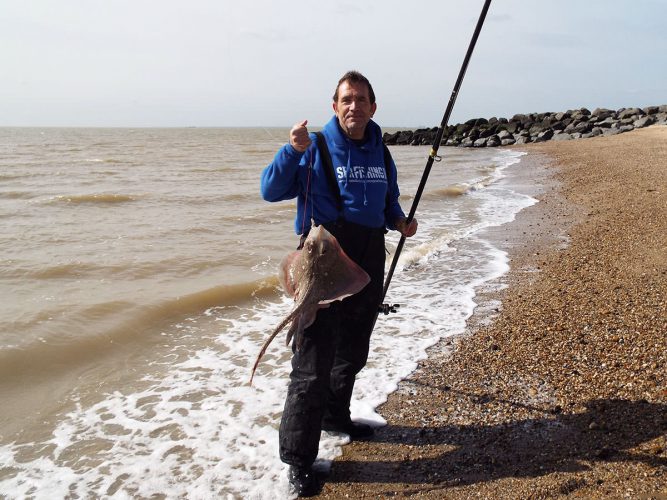 My first ray of the year was soon flapping in the surf and weighing in at around the 8lb mark, not a bad start to the season. Now for some strange reason if you catch one ray there is a good chance you will catch another, and true to form within 15 minutes of catching the first, my rod buckled over in the rod rest and another ray was fighting well in the easing tide. This ray was within a few ounces in size as the last one. We fished until nearly the bottom of the tide but, alas no more rays were caught, still there is always next week.