Shore black bream fishing doesn’t enjoy the same press as the boats, but there are southern beach venues with the power to deliver equally good sport. Pagham on the Sussex coast has fished out of its skin for bream in recent years, but success or failure hinges on timing as Paul Stevens reveals. 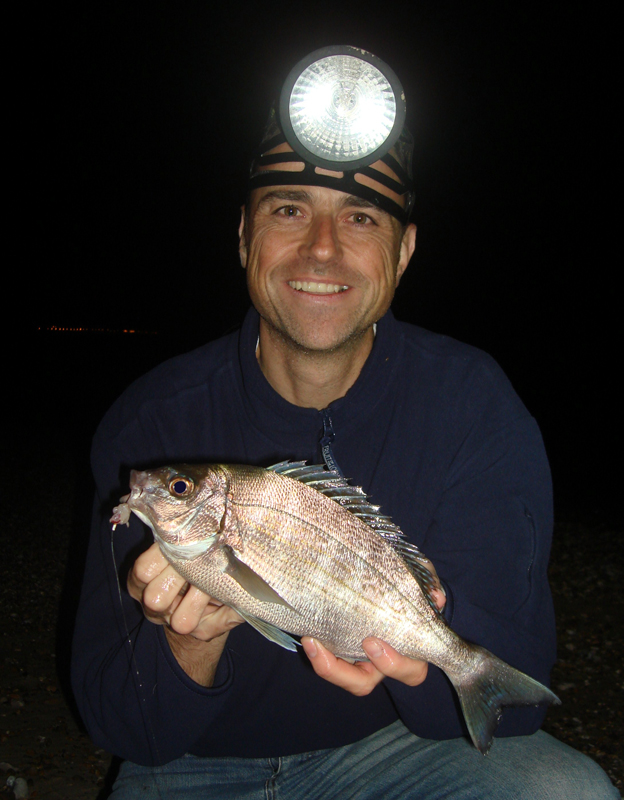 Pagham was never regarded as a top bream area until a few years ago when stacks of the things turned up out of the blue in a match. The biggest bream touched 3 lb – a magnificent fish by anyone’s shore standards. Whether this was indeed the first year these bream had moved in is open to debate, but they have reliably turned up each year since for 2 – 4 weeks around May. In the intervening years I have missed this golden window of opportunity for various reasons… but I was determined not to miss out this year.

Mid may arrived and reports of any bream were few. I wondered if they would show at all, but an evening’s debate in the pub spurred a group of us to action. Colin Carey and I made the short journey to Pagham for the test session. High tide fell at 11 pm and although the tides were dropping away, this one was still reasonably large and not ideal for black bream.

Sea conditions were perfect however, even if the fish were to prove less than obliging. Colin managed a single bream of around 1 lb pound, while my efforts returned a solitary dogfish. We quickly discovered exactly why the fishing grapevine was stone dead… the fish clearly had not arrived in any numbers, and doubts were reinforced.

It’s amazing how quickly things can change. Just four nights later, two other mates decided to have a bash and enjoyed great fishing. The tides were much smaller, with high tide falling at the unsociable hour of 03:00! My pal Snowy was on the phone first thing the following morning to report a fantastic night. They had landed about 30 bream to well over 2 lbs in a hectic three-hour period, including a treble shot for Snowy for 5 lb all in. 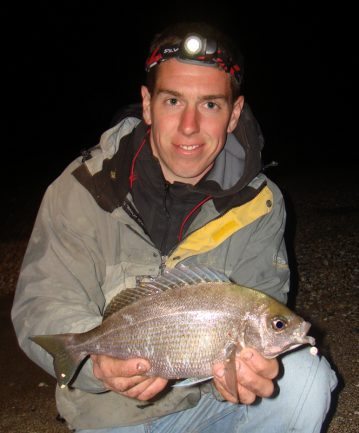 With the bream about in force, Colin ‘Wrasse Gnashers’ Carey, Darren ‘Ginger’ Bond, Chris ‘H from Steps’ Snow and David Falk got together for another crack that night. More in hope than anticipation, we hit the beach at midnight. Based on the previous night’s events we knew that fish were likely to show later with 02:00 being the general consensus.

Predictably, things began slowly with only odd dogs in the first couple of hours. At 02:30, just as the need for sleep threatened to get the better of me, a few telltale rattles followed by a slack-liner signalled a bream. Grabbing the rod, I reeled in the first bream of the night. At a pound-and-a-quarter it wasn’t a monster, but it was the start of a super night’s breaming.

It wasn’t long before everyone was getting bites and landing these little sliver-sided beauties. Over the top of the tide you couldn’t bait up your spare rig quick enough for the sequence of rattling rod tip – bend over – slack line… and many bites were missed in the all action melee. With plenty of bream nudging 2 lb, Colin and I packed up around 04:00 as we both had early starts that morning. The action didn’t slow for the others who kept it up for another couple of hours. Similar sessions and more sleep deprivations followed before the month’s end. I believe our success was simply down to us catching the venue and the breams’ arrival right on the button. 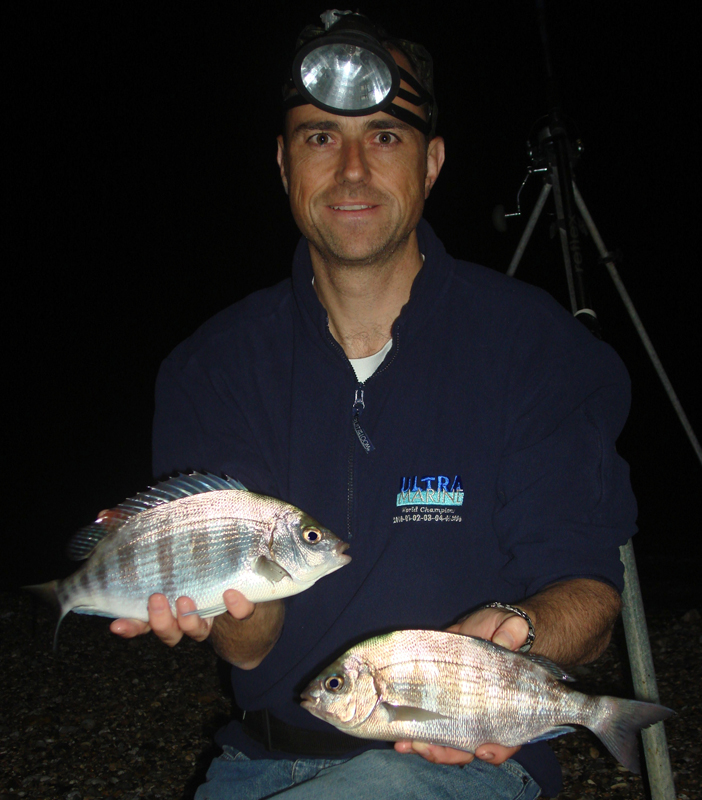 Bream are excellent eating and when the fishing is like this it is all too easy to get greedy. It is good practice only to keep a couple of fish for the table. Many of the fish were roe-heavy females, and we need to our bit to ensure that fantastic nights like these are repeated in the future.

Bream fishing is straightforward when they are abundant, but there are always little tricks to try when they are not so obliging. A simple three hook paternoster is the ideal shore bream rig. Hook lengths should be 40 – 50 cm long, and don’t need to be heavier than 15lb. Luminous pop-up beads are an optional extra, but I like to use them on at least one hook.

Hooks should always be small as bream have very small mouths, but they also need to be matched to the bait. Ideally 4 & 6 hooks should be used. When using size 6s with worm baits, guard against the points becoming masked. I used Kamasan B940 size 4s in the session above, and the top bait was a single whole party squid.

These squid are only about 1-2 inches long and work superbly for bream. There are many other types of bait that will catch, including crab and most types of worm – especially king rag. A grip-lead is also highly advisable as your hooking ratio will be far greater.

Might as well face it, I’m addicted to dogs