Shore fishing ace Paul Stevens tackles Orford Island where the cod run thick, and even sleeping beauties can cash in on the action.

With great reports of cod coming in left, right and centre the boys and I couldn’t resist a bash ourselves. All of us are keen match anglers, so the ideal solution was to take in a match where cod were likely, and the Weymouth Open at Chesil fitted the bill perfectly. With bait dug and rigs constructed the weather cut up forcing the organisers to call the match off. Desperate not to waste the bait we discussed various alternatives and plumped for a trip to Orford Island on the East coast which is renowned for producing cod. 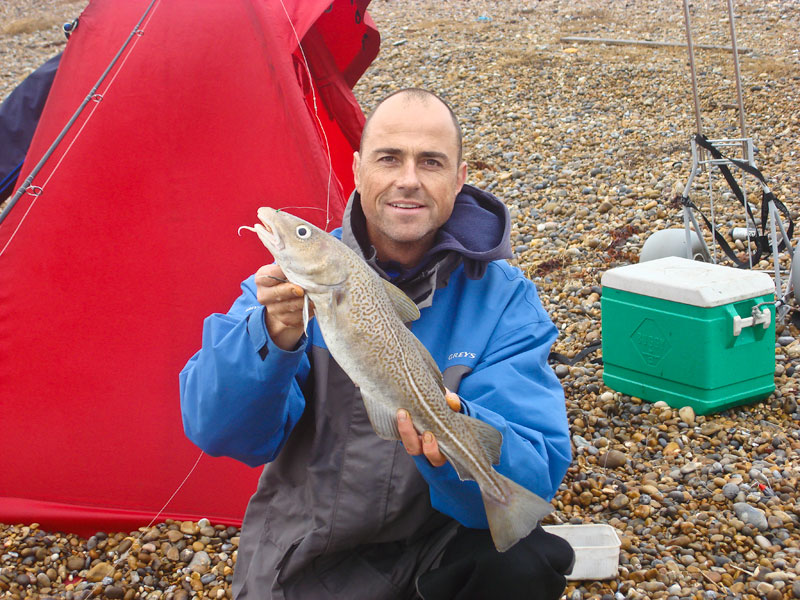 Chris Snow, Colin Carey and I travelled in one car and Darren Bond and Dave Falk in the other. The trip from Worthing took three hours which meant a 03:30 start to ensure we made the 7am ferry. Orford Island is reached by boat and the anglers’ ferry operates most days. After fishing it is absolutely critical to get back to the pick up point in plenty of time as this is not a place to be marooned on overnight. Apparently, Orford can also be accessed via Aldeburgh with a 4 x 4 vehicle but we did not have that luxury.

The early morning greeted us with a stiff wind and rain which was forecast all day. However, a reasonably small rise and fall at Orford, means you can spend the day tucked under your shelter, which is a major bonus. This was especially so for boozy Dave who had come straight from a nightclub and was still 10 sheets to the wind when we picked him up!

The boat trip took 10 minutes, after which we made for the far end of the Island. This is a considerable walk of around 35 minutes and beach trolleys to hump all the gear are definitely recommended. You can fish pretty much where you are dropped off, but I had never fished the venue before and I was not sure of the top marks. The walk was hard on all of us but you can imagine the state of Dave who lagged 200 metres behind the rest of us trying to keep the contents of his stomach from uncontrollably fountaining all over the beach. 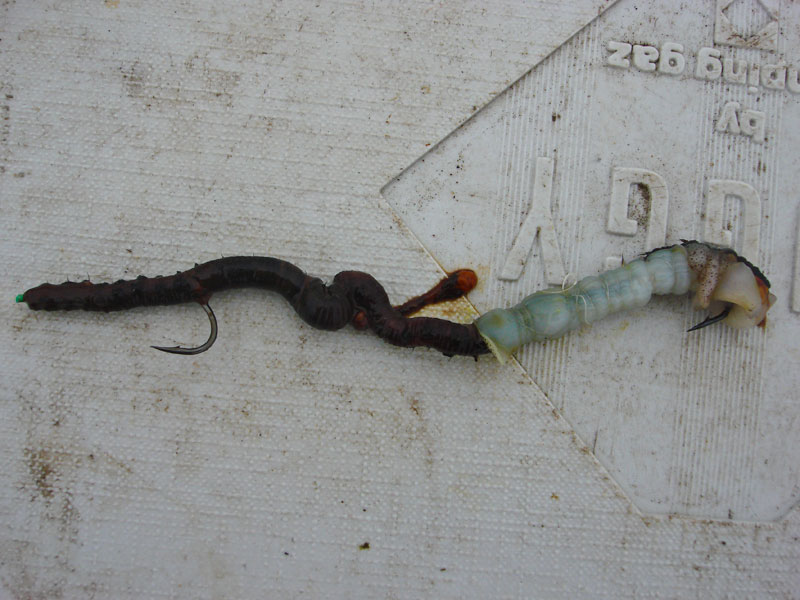 Knackered but not totally done in, we finally reached the spot and spread out as there was plenty of room. The sea looked absolutely perfect for cod… choppy and filthy dirty. Thoughts of failure were far from our minds – there just had to be fish around. We rigged up with only cod in our sights. Pennel rigs with 2/0 – 4/0 hooks were the top choice and baits were sized to match. Little was left to chance in the bait stakes. Whole and wrapped yellowtail lug, crab and squid were carried. You could fish just about any cod mark in the UK with these options and one of them would come good. 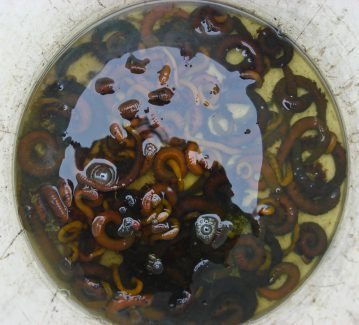 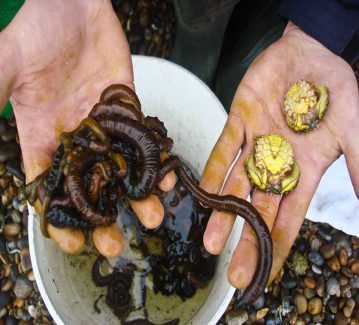 The tide had been flooding for about an hour when we started and baits were cast between 80 and 100 yards. The water is very deep here and the tides can be fierce. Holding bottom can be a nightmare if casting further, but as we were fishing neap tides that presented no great problem.

Ginger Bond was pitched furthest away and had three dogfish out before anyone else caught a fish. A few whiting came to our rods before Ginger landed the first codling of the session. At 3lb it wasn’t a huge fish but it proved they were there for the taking. Improvement was rapid then. Colin, Snowy and I all landing codling around the 3lb. ‘Dave the Rave’ however was fast asleep under his beach buddy and missing out on all the action. He did just manage to wind in and re-bait during this cod flurry before assuming the foetal position once more. 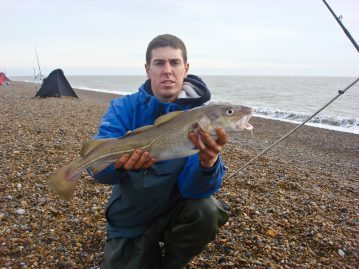 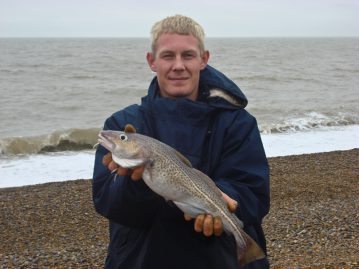 Ginger on the end peg was certainly enjoying the lion’s share of the action. The size of cod was creeping up too as he dragged a lovely 6lb fish up onto the shingle. There was £5 each at stake on the biggest fish so I got my head down, increased the size of my baits further in an attempt to scoop the loot.

I was studying my rod tip: bent nicely in the tide and willing a bite when it dropped back slack in that classic cod fashion. I wound down furiously and felt the other end thumping away immediately. My unspoken thoughts were that this could be a contender for the pool money, but as I pulled it through the surf it turned out to be a large whiting and a healthy 4lb codling package. This was my biggest cod for a while and my smile was genuine despite no cigar. 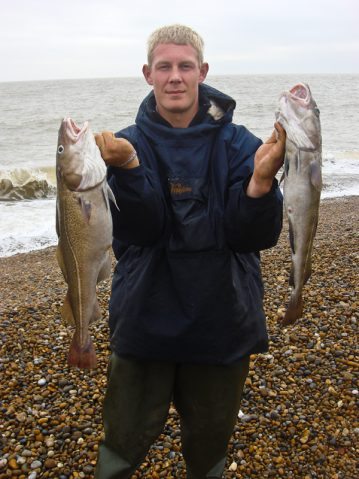 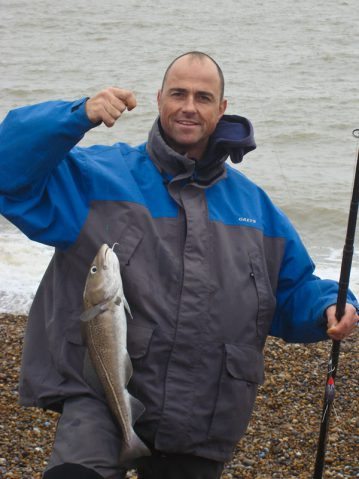 The action slowed after this so I strolled along to the drunken bum’s shelter intent on giving him some abuse. As I approached I noticed his line lying slack on the beach. I gave him a kick to wake him up and he struggled to his feet muttering away sorrowfully. Dave picked up his rod and wound up the slack. When he eventually got some tension in the line an instant grin confirmed that the fish was still attached.

Dave had the as yet unseen fish around 20 yards out and was still battling. He continued cranking down on the reel towing considerable weight closer to the beach. Looking at the big bend in his rod I was sure that our nightclubbing friend was just about to scoop the cash kitty. Not one but a double shot of codling were dragged clear. One fish was a tad shy of 6lb, while the other was over 3lb. A lift of 9lb of cod and the jammy git didn’t even see the bite! You can imagine the words that followed from all. 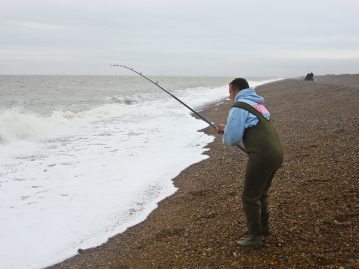 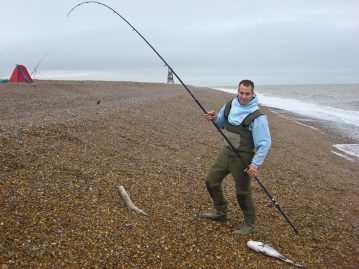 The remainder of the session continued with cod coming frequently – even Dave caught two more – interspersed with dogs and whiting until it was time to pack up for the long walk back to the boat. Fresh Yellowtails were the killer bait, although crab and squid caught fish. Two or three yellowtail lugworm offered on a pennel rig was outstanding. The final haul was 23 cod, about a dozen dogs and numerous whiting. 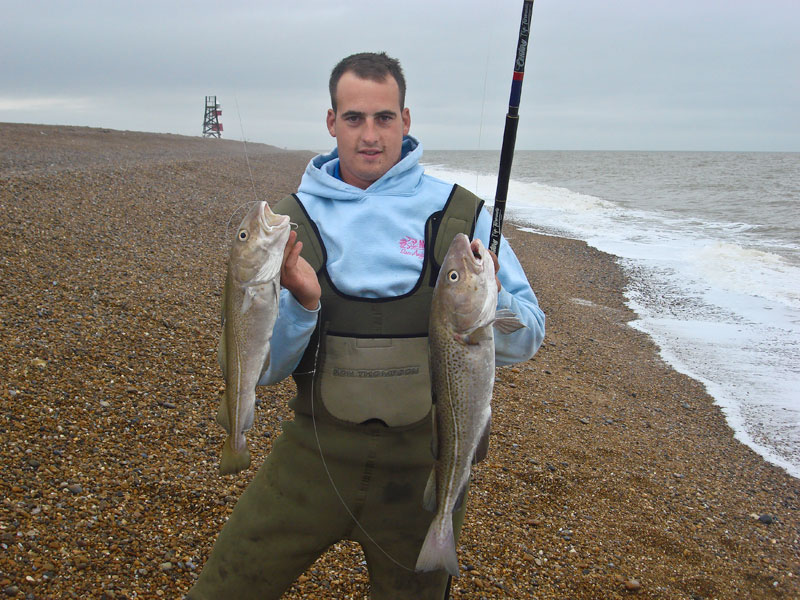 As it turned out Ginger just pipped the drunk for the biggest fish which paid for his expenses. This was my first trip to Orford but it certainly will not be my last and we are all planning on a return over the Christmas period.

How to make an Armamesh bait