Bass on the Fly

Jim Hendrick of ProBassFisher Guiding Services explains the lure of shallow water, reef fishing with a fly for bass. 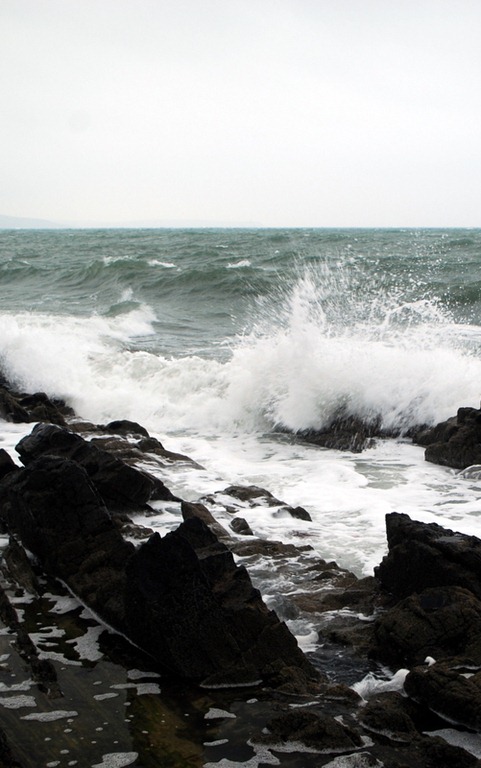 I flipped my fly into a broad shallow pool that was forming at the shore. It is something I always do having tied on, I wet the fly and ‘swim’ it for a few moments, checking its orientation, confirming to myself that the fish will want to eat it. I strip 20 yards of line off the reel and load it back it the basket, I check the leader and the leader knots again.

I look at where I am going to fish. I know it well. A mild southerly blows straight at me steady at force 3 to 4 posing no real problems. It has created excellent white breaking water along the front of the rocky reef I am about to fish, water clarity remains superb and I wade into the water past ‘groin’ depth. Its 30 minutes or so into the rising tide. The sun is to my right and its 16:30 in the afternoon. The sea temperature is still pretty cold and a sea fog drifts over the land from time to time. Air temperature is 19 degrees and there are some clouds.

I am fishing a slow intermediate line and nine foot leader of fluorocarbon and a four inch white deceiver tied in a loop knot.

Try this – place your left hand flat on the table and spread your fingers. Your middle finger is facing due south. Looking down at your hand imagine that each finger is a line of rocks higher and longer than what is in between, which is also by the way rocky too with a mixture of sand and stones gathered at the base of your fingers. Where am I at this time, where am I positioned for fishing? I am just to the left of the little finger past the end.

Waves crashing onto the shore are breaking slightly past the base of your finger nails moving North and water is running up the gulleys to as far as the second joint. Depth at 25 feet beyond your finger nails is approximately 12 feet and the ground outside is sand with large patches of weed covered rock. At the rocky points (end of fingers) it’s possible to move over and through to the next gulley. 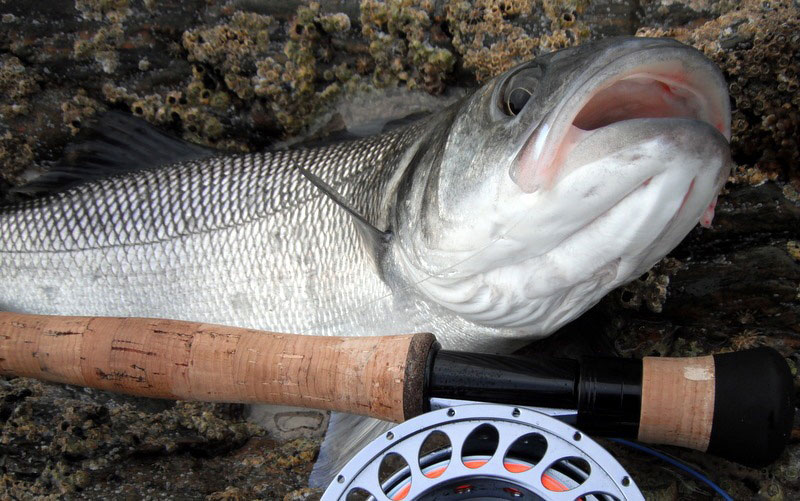 I don’t like to cast over my right side when the wind is blowing southerly or south westerly, the fly tracks too close to me. So I turn and cast backwards. My first casts are made out of the zone to the left of the little finger. When I’m happy that I have it going I make my first active fishing cast, making a cast towards the end of my ring finger, the running line crossing perhaps just at the top left. I immediately gain control of the line and as the cast is quite short turnover is very quick and I may at times ‘shorten’ my cast gently. The fly and the leader lands very ‘straight from’ me so ‘landing to fish time’ is very very short. There is one false cast only. My intention is to get the fly to meet and coincide with shore bound waves and to fish it through the ‘nail’ area and up to the second joint of my ring finger as quickly as possible. The fly is always on the move.

On the third cast I took my first fish. I land and release the fish and move slowly through the water crossing my ring finger without standing out of the water. Just beyond the left end of my middle finger is now my new target and this situation is one where I will fish most actively and as best I can. I fish for 15 minutes casting to the white water with no result I decide to check the knots – I begin reeling in the entire last cast when a fish hits, he is immediately on the reel and it’s a nice one too. Some walkers stop to watch the crazy man up to his elbows in the sea trying to land a fish, it’s always a mad time with a fly rod. This one runs to just under 3Kgs. 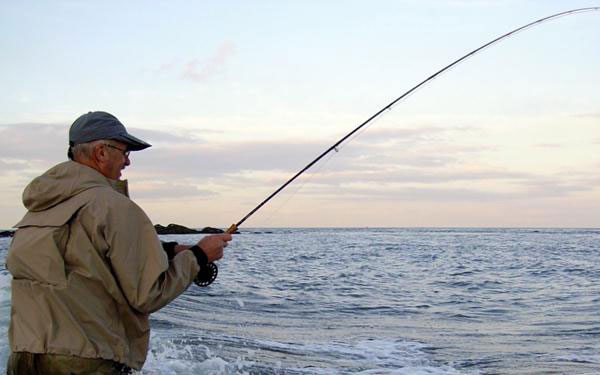 The walkers wave and shout I can’t hear what they say so I put my thumbs up and smile. I continue crossing the fingers, slightly up wind as it moves more west and take two more fish. Eventually reaching my thumb I stop for a while and then fish back. The tide has pushed up now and the middle knuckles of your fingers are my targets as I move down wind over the same area.

I prefer to fish moving against the wind even if its more difficult so I normally get out at my thumb and walk down the beach back to what remains of the little finger and fish back up again towards my thumb. This means I am fishing at the location that has been fished an hour or more ago and hence fish have had the least amount of ‘disturbance’. Once then once more, about three hours and I’m done.

You will find fish around reefs and rocky points because they provide both ambush locations and opportunities to find food. As microscopic matter is stirred with wave activity and rising tides are compressed into tighter spaces so are the larger predators along the chain – including you.

The continued attraction and at times obsession for me is the combined number of challenges that I face when fly fishing. It’s the cast, the limit of the cast, the quality of the cast, the way you move and fish the fly in the bass environment, how and when I move in the water……it goes on.

Follow Jim’s exploits and find out about his guiding and coaching services over on the excellent ProBassFisher website.