Month: February. The venue was St. George’s Rd, Eastney, Portsmouth in clear sky conditions with a light SSE wind. High water on this 3.6m neap tide was 17:51, and the session objective was to bag a plaice regardless of how unlikely that might have seemed. 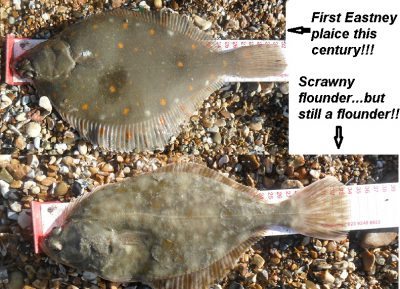 I thought I might have been kidding myself but this session was as much to see if I could actually catch my first Eastney red-spot of this century! After a few reports of plaice actually being caught – you know, those flat things with red spots like we used to catch in the “good old days” before the millennium – I thought I’d try to see if it would be worth while doing a spot of proper plaice guiding.

Bait was rag and lug as might be expected, but also some mackerel and sandeel just in case because it was the Solent in daylight and you just never know unless you try… right? I would have preferred Monday’s tide as it offered a bit more of the ebb before it got dark, but the weather wasn’t ideal so I settled for Tuesday in the sun instead. I fished by St George’s Road as I thought it would be ideal on such a small tide as there is more tide running through this part of the beach.

A few other anglers were also spread along the beach in the hunt for red-spots. I used three rods; first, a suped-up quiver rod that would be fished within 40 yards of the beach. The bottom hook was ‘blinged’ and baited with straight with rag, with fish bait on the middle hook and lug tipped rag on the top hook. A medium range rod had same rig and bait but cast 60-80 yards. The whacking rod had just two hooks… one blinged with rag and the other un-blinged with lug tipped rag.

It was plain leads all round to ensure covering more ground. I’ve never really been a lover of too much bling, as I find it hard to believe that any fish has not already seen or smelt the bait before they were close enough to see a sparkly, pearly necklace on the seabed being chased by a worm! Still, it doesn’t seem to put them off so who cares!

I was greeted with a nice bit of right-to-left run on the early flood, and the first couple of casts showed that any crabs were conspicuous by their absence – result!  Third cast on the medium rod and there were visible signs of interest. Was this the long lost but hoped for suspect? After another couple of pull-downs I decided to wind in and reveal the identity of the suspect. Anyone who fishes Eastney knows that small strands of kelp attached to stones sparsely populate the seabed here. Each strand’s sole intention in life is to confuse and annoy us anglers and often give false hope when winding in another heavy but fishless cast, so I didn’t get too excited. There was obviously weight on the end, but was it a weeded stonefish or an actual red-spot?

Stones Don’t Do That

Whatever I was retrieving started to swim uptide through the waves, and stones most definitely don’t do that. First two hooks were out of the water, then the weight, followed by the seemingly never-ending string of pearly bling on the bottom snood…which was closely followed by a pair of eyes attached to a flat body with… SPOTS! YEE-BLOOMIN-HA, would you believe it, success!! 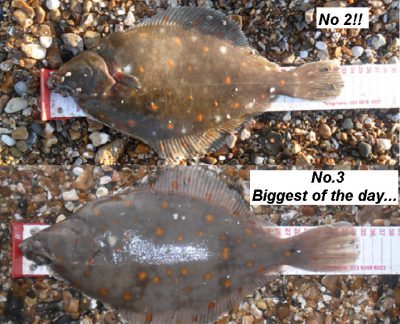 The mission had been accomplished in 90 minutes with a nice plumpish plaice of 32cm. Elation however was ‘slightly’ tinged with brief and fleeting musings of disappointment that I might have been wrong about the need for beads and bits. For 10 minutes I continued to chuckle disbelievingly to myself that I had actually managed to turn up an elusive plaice, when cor blimey, the medium rod tip again started to bounce. After a few minutes of watching the rod twitch and pull down, in came a flounder. And on what was shaping up to be a night of surprises it was caught plain mackerel, in the Solent? This is most unusual for a “darn sarf” southern softy fish, while ‘oop north’ it’s normal… but here it was just odd. At 34cm it was thin and a tad scrawny, but it was still a flounder.

Another bite next cast on the same rod came to nothing. In the meantime ploppy and whacker were failing miserably to catch or even get a bite. By 4:30pm the tide was moving nicely from left-to-right, and I noticed a movement on the whacker-splatter rod. I gave it five then wound in.

It was heavier than usual, and the fish kept low hugging the bottom all the way in. Would you believe it… another plaice! It measured a mighty 33cm and was caught on un-blinged lug tipped rag. The medium rod nodded again soon after and yet another red-spotted culprit hit the beach. This one went 34cm, and again it was taken on un-blinged lug tipped rag. In my best John Motson voice the score was now bling 1, non-bling 2 (or 3 if you include the flounder).

The same medium rod trumpeted yet another bite almost straight away – a good pull-down and a typical flattie bite. I gave it the obligatory handful of minutes then wound a few turns to see if it was hooked. Bugger… nothing on. I decided to leave it where it was to see if the little git might come back. Two minutes later there came a different rattly sort of bite and I whisked this one straight in to discover a scrawny whiting on sandeel. The lug/rag on the top un-blinged hook was well chewed and partly sucked off, obviously from the first missed bite.

The whacker rod then produced another plaice of 21cm on bling, which was the smallest of the session.  Darkness fell and a few whiting were caught, but it was never expected to be a fish fest on a dropping neap tide with high water before dark.

The last cast on ploppy, which had now been promoted to join medium in the 70 yard-ish range, as dropping short really was a waste of bait, produced a nice little dab of 25cm. Final scores were not high, but four plaice, four or five whiting, a flounder and a dab was an acceptable haul on such a lovely afternoon and evening. ?Two plaice were caught on bling, and two weren’t, which thankfully only goes to show that sparkle probably isn’t that important. But, it also shows that it doesn’t stop you catching dopey flatfish so who knows.

The plaice seem to be back on our part of the Solent for the first time in years, which is great news for everyone here and hopefully numbers will even increase as spring arrives. You never know, I may actually be able to take people fishing in the daylight this time of year with a REAL chance of catching something! Welcome home lovely red-spots, I hope to see you again very soon.

If you want to stay right up to date with Ian’s fishing adventures or perhaps book a guided outing or even treat yourself to some one-to-one fishing tuition with the best in the business then why not look Ian up on Facebook.