2013 was the strangest fishing year we have had since moving to Dromagowlane House on the Beara Penisula ten years ago.

The season started normal enough with Shaun and the guys arriving in Beara for their April shore fishing bash, a few showers and cooler weather during their visit but it did not slow them down as they took huss to nearly 16lb, conger in the 20’s together with plenty of pollack but no ray this year. 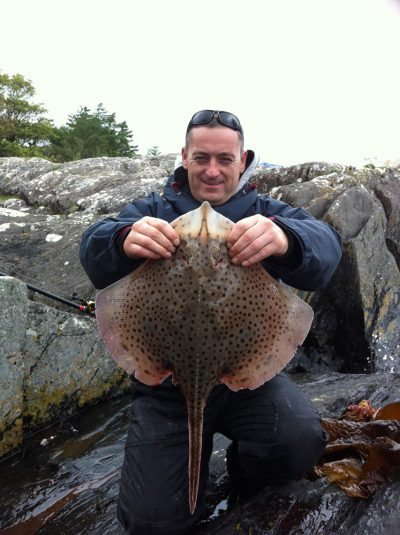 We expected the ray to start showing once the weather warmed up but it stayed stubbornly cold and by end of May, we still had not seen a ray, or even a wrasse, unheard of in previous years. Suddenly in early June, we took a leap from winter to summer, up went the water temperature and the fishing took off.

Kev and Shaun from the Isle of Wight were on their first visit to the Beara and were soon into thornies to 10lb along with all the usual pollack, wrasse, conger and huss. Regular visitors from Holland, Tonnie, Petra and Edwin have a good record of finding specimen fish on the Beara and this year was no exception as Tonnie had a specimen spotted (homelyn) ray and a specimen ballan wrasse both weighing nearly 6lb.

Specimen spotted rays were also the order of the day for another regular Gavin with two fish of 6.2lb and 5½lb. Fishing partners Jason, Mark and Paul also took some great catches of ray with up to 20 fish in a session.

Fishing up to speed

After a bit of bad health it was good to see John Young from Yorkshire visiting us again and he made up for lost time with a great variety of species, landing huss, ling, ray, conger, doggies and his first ever bass all from the Airport. He then tried has hand at the famed Beara conger and landed a huge fish which took a set of 40lb scales to their limit. Still he knows where it lives and this year could see him with a bigger set of scales. 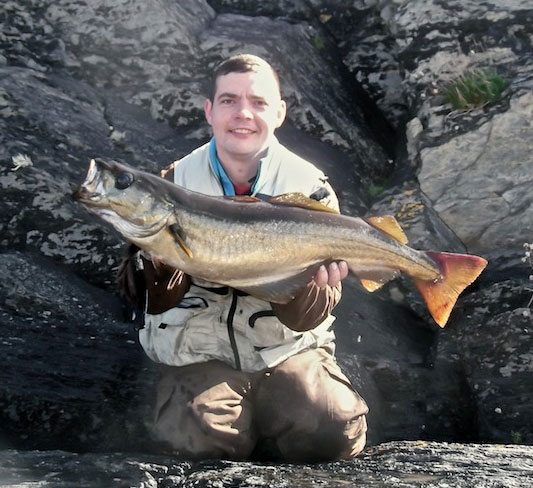 After the slow start, fishing was now back up to speed with visitors picking up plenty of fish and enjoying the sunshine. July saw the arrival of Clive and son Liam who had a fine day’s sport at a new mark with 30 pollack to 7lb and 12 wrasse to just under 5lb. They also added double figure ray to their tally for the week. Harry and wife Christine arrived in mid July and were soon in action with conger to 17½lb. After hearing of Harry’s exploits, his brother Anthony arrived for a few days and stole the limelight with a cracking conger of nearly 30lb, not sure if he will receive an invite from his brother for 2014. 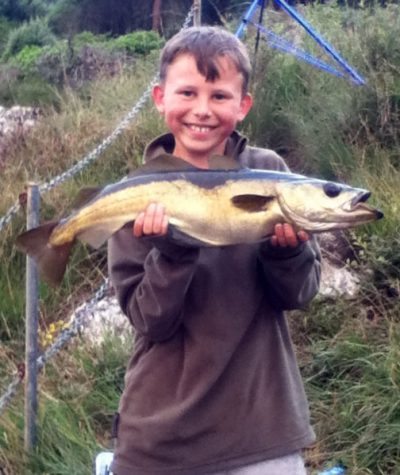 The family group of Kev, Mike and Jim were on their second trip to us and put all they learnt in the first year to work with some excellent catches of rays and huss and especially the pollack with up to 60 fish in a session. Father and son Barry and Greg were looking to emulate the previous year when Barry took a massive specimen huss of 17lb although the big huss failed to perform they had a near specimen mullet which weighed in just an agonising 2 ounces short of the magical 5lb mark. Special mention must go to 9 year old Alex Martin who along with a little bit of help from father Karl caught conger to 20lb, huss and ray to 6lb, wrasse to 3lb and on his last day 20 pollack to 5lb, I think we have a star in the making.

The year also threw up some fine bass with fish to 8lb taken on lures at several venues and as I write this, we still have plenty of bass showing – but few anglers fishing for them. That Dublin fishing machine Mark Noble was at it again, catching pollack with some magnificent fish to 14lb. He really has the method for nailing these big pollack from the shore and is reaping the rewards for his hard work.

Another man who got amongst the pollack was Richard Garvey from Dublin who had a great session at Dursey with 60 fish for the day to double figures and the best fish of the day lost as he tried to slide it onto the rocks which he estimated at 14lb plus. Richard also had some good bass to 7 pounds.

With the season starting late, it carried on well into October to make up for the poor start but what was to happen later quite literally astounded us. My good friend of many years, Graeme Pullen, came over to do a bit of filming for his Totally Awesome Fishing Show series and one evening I took him to a mark I had not fished for years but where I had previously caught some good conger. 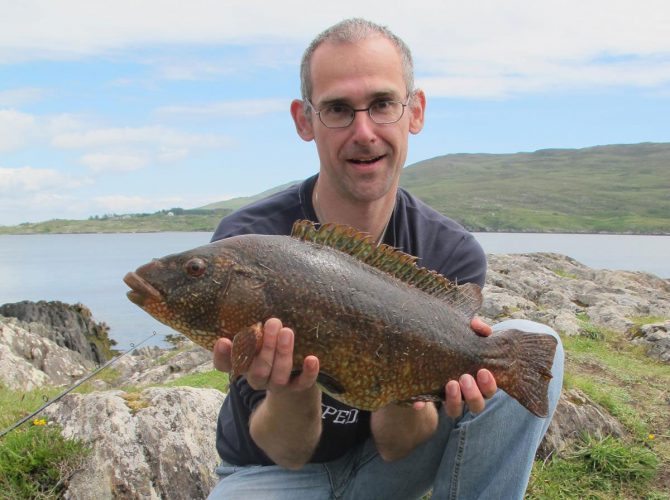 We caught no conger that evening but Graeme had a take from something that we soon realized was no conger. This fish took off at a rate of knots and despite a clutch wound hard down had no intention of stopping and the inevitable end came as the line broke with a sound like a pistol shot leaving two anglers wondering just what had picked up the bait. 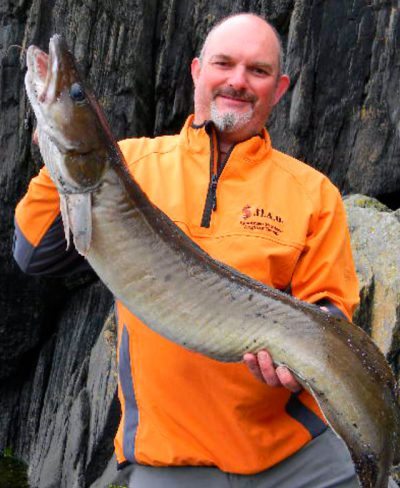 Now Graeme is no stranger to big fish having landed 1000lb plus marlin as well big shark from the shore. These were taken in slightly more exotic locations than the Beara Peninsula but the loss of this fish had fired his imagination and he vowed to return loaded with the right equipment.

In November, he did indeed return and armed with tackle that had previously landed 1000lb plus fish all seemed well. To cut the story short Graeme did indeed hook up not once but six times on the first evening. No fish were landed because they were simply unstoppable. The first take before it set off on a several hundred yard run was seen and estimated to weigh at least 500 to 600 pounds. Landing a fish of this size from a boat is difficult – from the shore it is nigh impossible.

This is only the beginning of this story as we intend to locate, and hopefully land one of these leviathans during 2014 so as they say in all the best places – watch this space. Moreover, all those guests who over the last ten years have returned lamenting the loss of a big fish; now you can truly start to wonder what was attached to your line.

My apologies to the many people whose memorable catches did not get a mention, it is impossible to name everybody but may we take the opportunity to wish all a happy and fish filled 2014. You can find more details about the fishing on the Beara Peninsula on the website.