A handle on Hawsker

Hawsker is a small village located on the edge of the North Yorkshire Moors with a big reputation for cod. The place exudes a quite unique atmosphere created in part by the echoing rush of a churning sea that accosts the senses on approach over the brow of the hill and before descending towards the cliff top. Hawsker is a big fish fortress; anglers coming here have to earn their reward, as the fish don’t give up easily and they have to be forcibly dragged from their lairs. Ask any local angler, or even those cod anglers from further afield, to name a big fish venue, and Hawsker will likely be top or a very close second in the running. 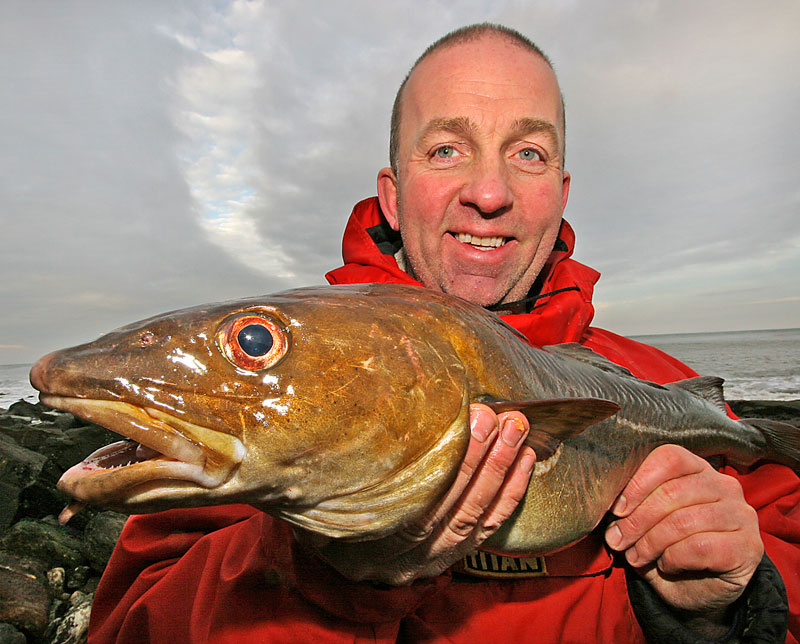 When those north sea breakers begin to roll in then you know the cod season has started. Although fish can be taken all along this stretch of coast, the two most popular and productive marks are Iron Springs and Green Springs. These marks get their names from natural spring waters that emerge about a third of the way down the cliffs, and for the colours they vivid imprint on the cliff face as they fall to the shoreline. 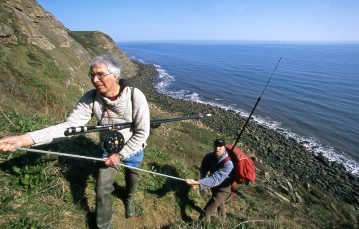 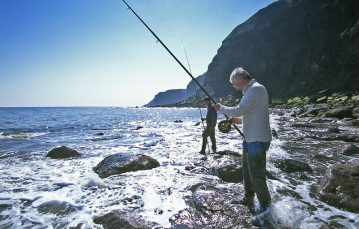 Green Springs is seen as a bloom of dense green algae and moss that thrive in the damp conditions, whilst Iron Springs takes it names from the rust coloured deposits that cascade down the cliff from the source of the spring. The coloured falls from each spring act as beacons for anglers as they descend the cliff to what are two of the best big fish marks around.

Although fish can be taken all year round at Hawsker, the best time is usually December onwards, once the seas have been running and the big fish have had time to settle in. Fish can be taken at most times of the tide, but best time is undoubtedly a couple of hours either side of high water. This is when anglers are pegged back up against the cliffs, perched on rocks nestled in the shadows of the ‘springs’ above the foam-topped grinding swells; awaiting that steady seaward lurch on the rods that signals action stations. 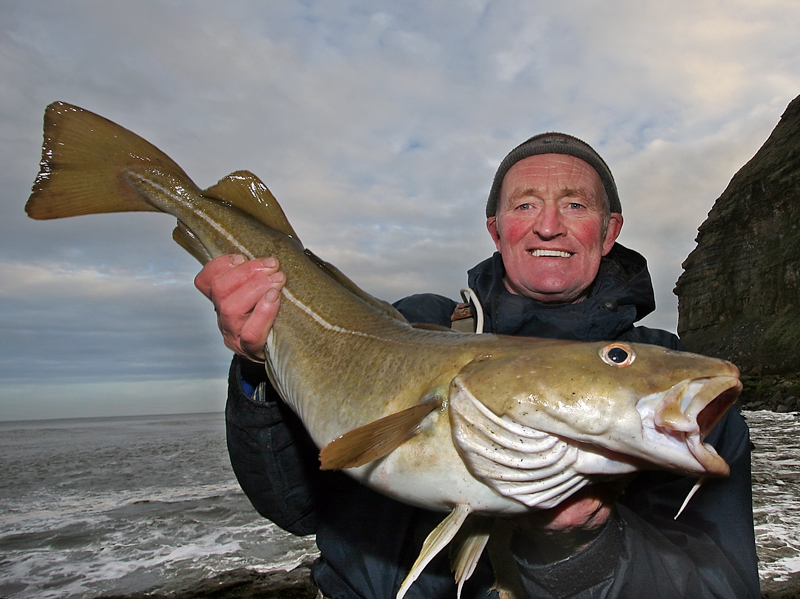 When conditions are like this, anglers always have that expectation of a big fish. So saying, perhaps a point fisheries committees should note is it isn’t always the catching of fish rather it is the expectation of catching those fish that motivates and excites.

Year after year this mark throws out double figure fish more consistently than any other; plus the average size of the fish is better than elsewhere. It is a statement of fact that you don’t often go down here and get bags of small codling.

So just why do bigger fish show up here? Personally, I think it is down to a combination of deep water close in, and an abundance of food… big fish food in the shape of lots of rocklings, plus a good head of pouting. If you go to Hawsker and the cod aren’t there you can almost guarantee to catch rockling, and big ones at that. This is similar to other big fish places like Boulby, and to some extent, Ravenscar. 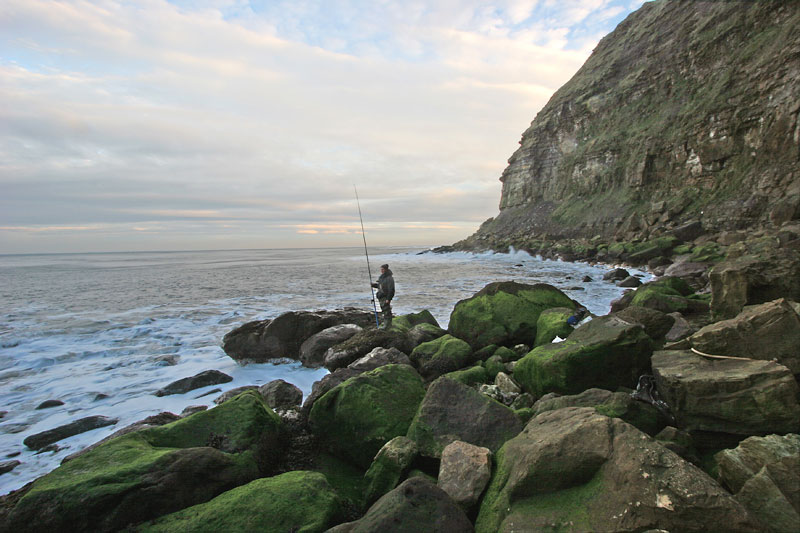 Kit for the job

If a big fish is hooked then a real struggle begins. Quite often there is a lot of weed and undertow, but because of the heavy seas, anglers are usually perched high up on big rocks, so landing a big fish needs a good deal of skill and a big helping of luck. Many an angler has had his trophy pulled back into the depths by a clawing wave, as there aren’t many places to beach a fish. The usual protocol is a big clean lift, or, if possible, a gaff if you can get close enough. I have had to dead-lift fish up to 12lb, so strong tackle and confidence is required. One thing I always do is suss out a potential landing point to fish from; one that you can get close to the water but remain safe, and one that will allow you to at least have a relatively good lift. 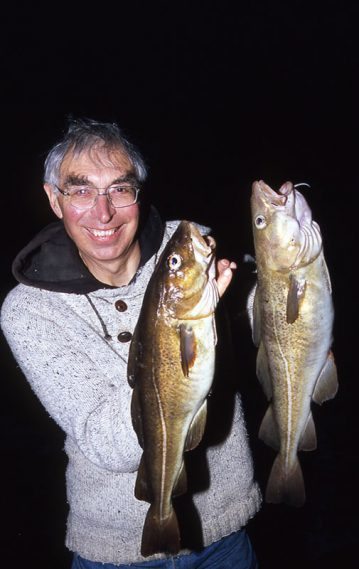 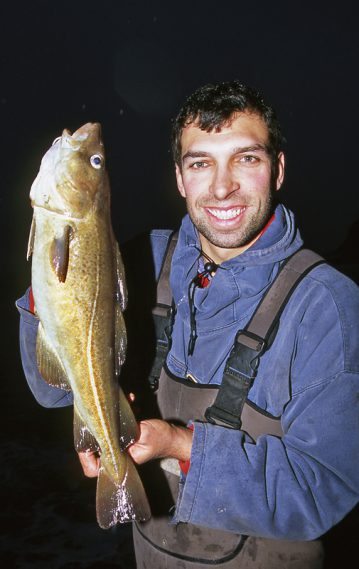 A good 13ft rod that’s not too stiff. The poker theory is all wrong – you don’t need broom shafts to fish rock marks. Match the rod with at least a 7000 series type reel, something with a good handle to get your fist clenched onto. Mainline should be a minimum of 30lb to a 60lb shock leader, while strong 40lb rig snoods and 5/0 or 6/0 hooks are in order. 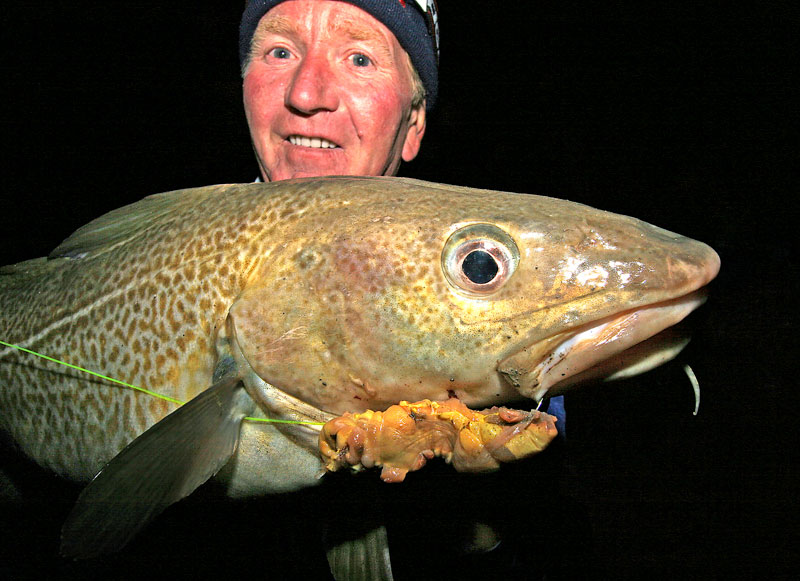 Most bait will take fish, especially cocktails. But most anglers’ top choice is crab. Distance isn’t an issue either, these fish come right in to the rock edge to feed, and often that is where the best fish are taken.

You don’t always have to wait for ideal conditions, often in almost calm conditions you will find fish that have settled into the kelps beds and found a niche. A perfect example would be the 21lber that was taken a few years ago in the middle of summer. And for distraction, there are always plenty wrasse and rocklings to keep the rod tip ticking over.

Before visiting anglers get that urge to descend on this sleepy coastal locale, just a cautionary warning. This is a difficult place to find, parking isn’t easy, and if you don’t like clambering down cliffs then this isn’t for you. 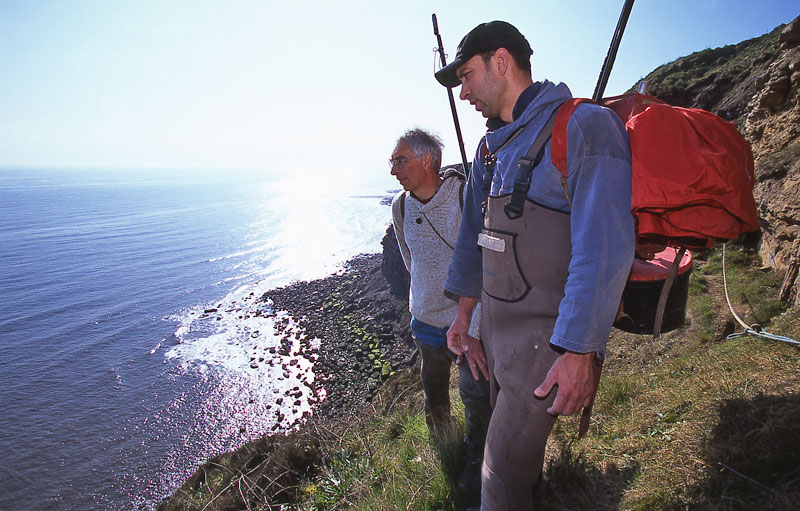 If you haven’t fished here before, it is advisable to go with someone who knows the ‘dos and don’ts’ of fishing Hawsker.