Wet and windy – but anglers tag on!

On a wet and windy weekend over 100 anglers, including students and scientists from SAMS (the Scottish Association for Marine Science) and SNH (Scottish Natural Heritage), gathered on the shores of Loch Sunart and Etive to take part in ‘Tagathon 2009’ … a fun event to record 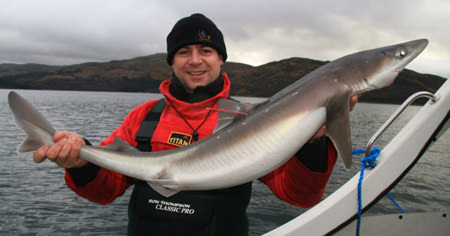 numbers of all shark species caught. Thanks to the phenomenal efforts of the anglers who took part from boats, kayaks and shore, over 65 spurdog, common skate and thornback rays were conventionally tagged, while a number of data storage tags were also deployed in order to gain some more comprehensive data of the spurdogs preferred habitat by recording depth and temperature.

Why the focus on common skate and spurdog? Their ancestors evolved over 400 million years ago and were once present all around the Scottish coastline. Sadly both are now classed as critically endangered by the IUCN (International Union for Conservation of Nature). Why Loch’s Sunart and Etive? Anecdotal evidence suggests the presence of a resident populations of the species which use the Lochs as breeding grounds for the species.

The Scottish Sea Angling Conservation Network (www.ssacn.org) through their Scottish Shark Tagging Programme (www.tagsharks.com) and tagging events such as Tagathon and Sharkatag are trying to provide essential data on which the Scottish government can act and establish conservation measures to ensure the survival of sharks, skates and rays in Scottish waters for now and the future.