Who would believe that we are now in the throes of winter, most days the temperature hasn’t dropped below 10 degrees. Not really conducive to winter fishing and so it has proved, with the warmer weather thornback rays being caught from beaches, boats and piers.

Walton Pier has had a very good week, seeing rays caught from the top and sides of the pier on most day and night tides. Sam Kennard landed a good ray on an evening tide here.

Whiting and dogfish are making up the rest of the catch along with dabs and the very odd codling. 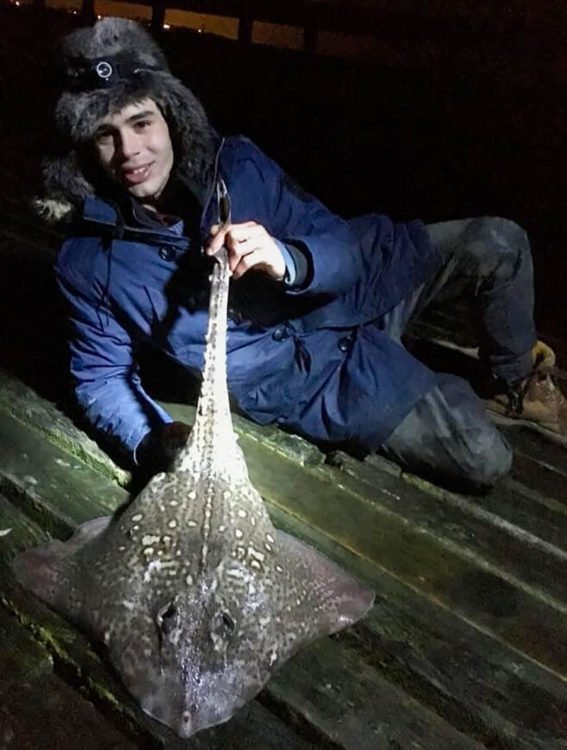 The Walton Pier Club fished their latest match on the stem of the pier, 18 anglers fished in a very strong wind and driving rain. Indications looked good for the fish to be feeding, unfortunately the fish had other ideas. Not all anglers caught and very few sizeable fish were landed. Only whiting and rocking were caught.

The Walton and Frinton beaches are still catching hordes of whiting after dark along with the odd thornback ray and school bass.

Colchester Sea Angling Club also fished Walton Pier for their Pairs match, 17 anglers turned out to fish the flood tide. The whole pier was open to fish and some opted to fish the top while other competitors chose the stem. The fishing was slow for most, but one or two anglers did find some good weights.

The winning pair were Steve Yallop and Martin Close with a combined weight of 21lb 8oz, second was Joe Dubiard and Bill Paquette with 10lb 8oz and third place went to Phil Buy and Vic Pearce 8lb 5oz.

The heaviest flatfish pool was shared between Joe Dubiard and Nik Highfield with an 8oz dab.

The Holland and Clacton beaches are also seeing those whiting shoals and the odd thornback ray. After dark will be the best time to catch a ray, try squid or bluey baits to optimise your chances.

Clacton Pier has come back into form with thornback rays and reports of rays being caught on day and night tides, still the odd dogfish to be caught along with whiting.

St Osyth beach continues to see plenty of whiting and a few rays from in between the rocky breakwaters.

The boats have also been producing pretty good catches with thornback rays being the main stay, who would have thought that rays in the middle of winter would be the top catch! Still plenty of whiting, although they should be slowing down as we go into the new year. Reports of a few more codling showing this week, but I think the water temperature has to drop a few more degrees before there any significant catches.