The final Skegness Pier Angling Club (SPAC) match of 2018 was held on Saturday 22nd December from 3:30 till 7:30pm at Trunch Lane. Conditions were perfect and there was another good turnout of 18 members, with the usual great support from travelling anglers.

I had predicted a whiting and dab fish-fest and although the match didn’t fish quite as well as the Xmas Fayre, there were still plenty of fish about to keep rods nodding. Although everyone was catching, the match turned into a three horse race between two established top class Grimsby anglers and an up and coming young star. All three of them ended up with over 6m; but it was in form 17 year old Dylan Morgan who came out on top, catching 12 dabs and 12 whiting for a total length of 684cm. Dylan was casting three hook clipped rigs as far as he could, using size 1 hooks baited with yellowtails and tipped with mackerel. 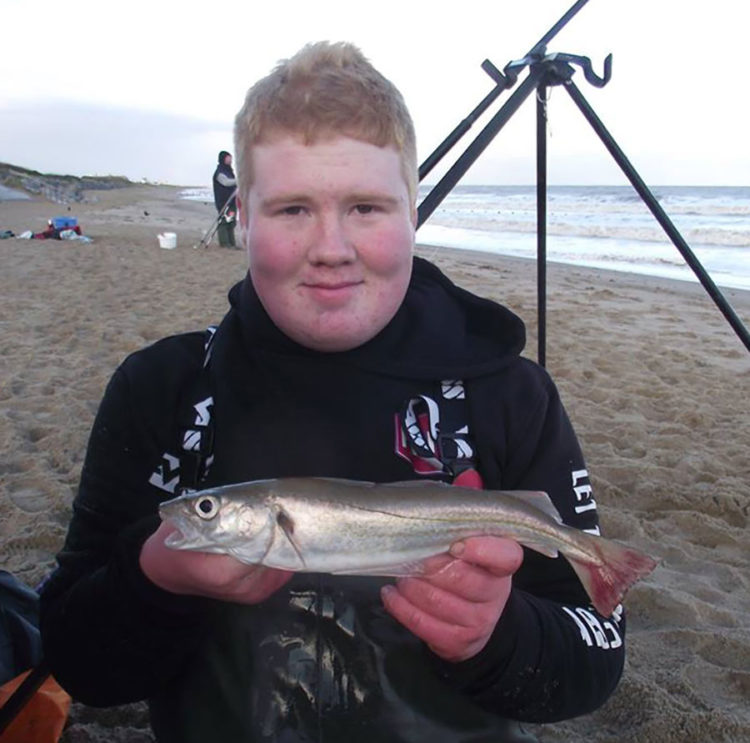 Comp winner Dylan with a whiting

Agonisingly close behind Dylan in second place came Garry Hutson, who also caught 24 fish, but ended up just 6cm adrift with 678cm. Ian Nelson filled the frame in third place with 22 fish for 633cm and another Grimsby ace was in amongst the prizes again, with Karl Nangle taking fourth place with 22 fish for 597cm.

Lincoln based Kev Warner caught the only cod of the match, which measured 36cm, but it was Ian Nelson who won the longest round fish prize, with a specimen 42cm (1lb 4oz) whiting. Flounder specialist Garry Collins was soundly beaten in the match by his novice sea angler brother Keith, but had the last laugh by taking the longest flatfish prize with a flounder that hit the measure at 33cm (1lb). In total, there were 300 fish caught by the 18 anglers, consisting of 173 dabs, 124 whiting, 2 flounders and the solitary cod. Another good result by any standards.

Another great match, thanks to everyone that turned out to fish. Also, thanks to Steve Herrick of Lakeside Leisure and Big Catch Tackle for his invaluable support.

The first SPAC match of 2019 will be held on Saturday 5th January from 3:30 till 7:30pm at Trunch Lane again, with Club members fishing for the C Smith Cup, but the match is open to all to fish. Further details of matches up to March will follow in due course.

So that’s it for 2018 and what a great year it’s been for SPAC, with increased membership and good match attendances throughout the year. I would like to say a big “thank you” to everyone that has supported the Club and also to all those people that have helped out in so many ways. Don’t forget the SPAC AGM and Trophy Presentation on Saturday 2nd March, which will be held at the New Park Club, with the AGM match being held the next day. Please pass on to those not on FB and contact me for any further details on our activities.

Finally, I would like to wish all SPAC members and everyone else out there, a very happy and successful New Year. Best wishes