The fish have moved back inshore during the past week. Plenty of smoothhounds with good numbers of double figure specimens being caught at low and high water. The bass fishing has provided good sport also with some anglers catching on lures. Other than that there are some sole and pup ropes about from the shore and bigger tope on the boats so plenty to keep the rod tips bouncing.

Fleetwood and District Angling Club found perfect weather for their match at Rossall hospital. Very little wind and a sea that was calming down just right to target smoothhounds.

Twenty anglers fished nine caught fish. There were plenty of tales of lost fish and rods being pulled out of rod rests and runs peeling line of the reels.

Congratulations to match winner Craig Thompson who had six smoothies, followed in second place by Dave Hutchinson. Top bait was crab, but worm tipped with squid also worked and the ability to put a bait a good distance also was a benefit.

Next Saturday’s match will be a flatfish and round fish event at the Miners Home with fishing from 12 noon to 3.30 pm. 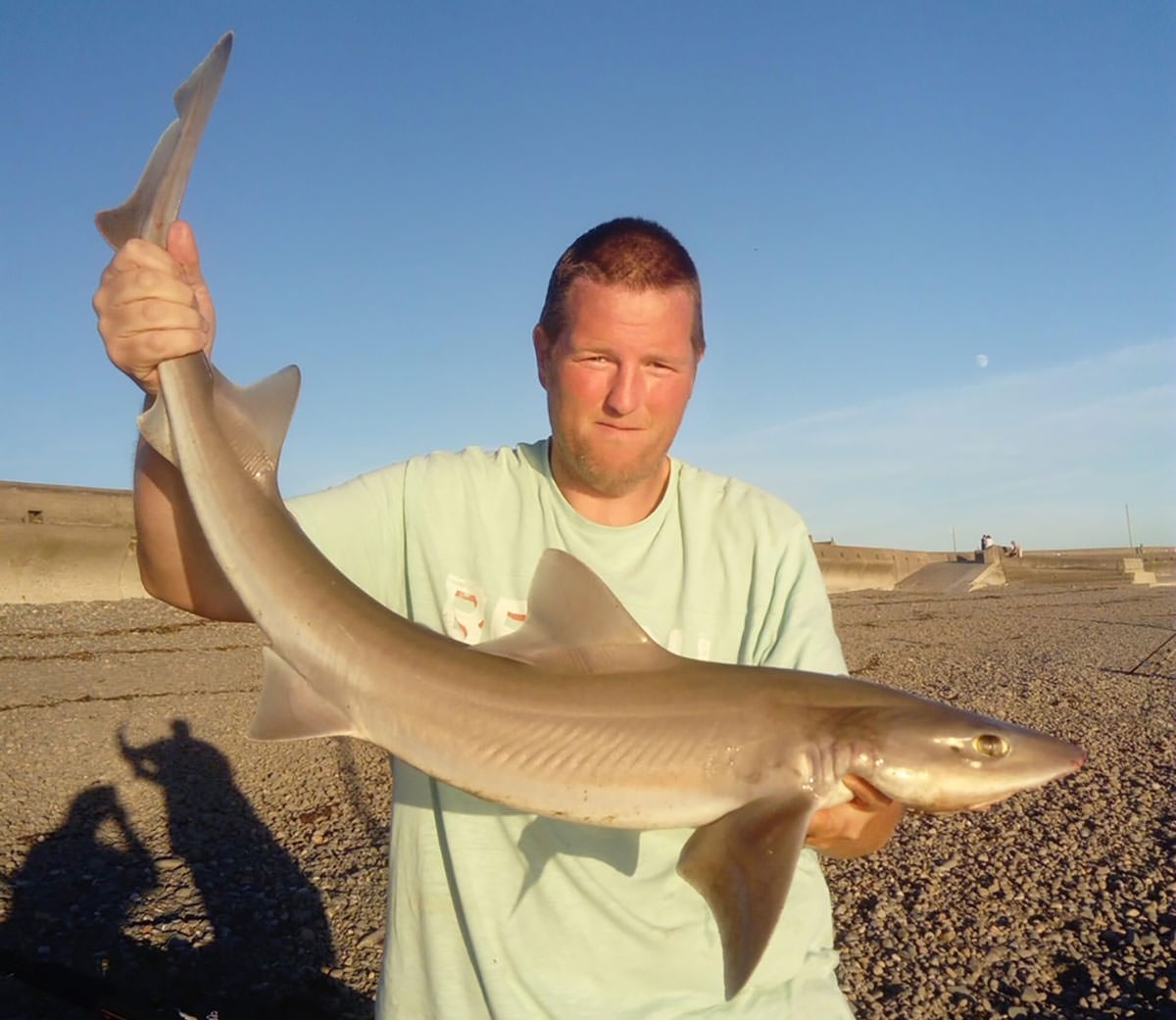 David Hutchinson with a double figure smoothhound caught during the match

A great day out with everyone catching, so thanks again to the nine members supporting the match.

The boats are also taking advantage of the calmer and more settled weather. And there is plenty of action out there with multiple hounds, mackerel and big tope.

Carl Dady enjoyed a great day afloat with Chris Walton on his boat after an early start out from Knot End. They headed straight out for mackerel which they found quickly then setup the big rods for tope.

After a early screaming run Carl lost what felt a very nice fish after it clipped the back up motor, lesson learned! Almost immediately Chris hooked and landed a low 30 pounder which signalled the start of numerous tope hitting the boat for around three hours.

Sport slowed so they made a move right out to the deeps and were instantly back into tope. The stamp of fish was much bigger with both of us landing more in the low thirties before Chris had one that looked close to 40 so we measured it and it made 37.9lb. Carl followed this up with one same size and then a new personal best of 44lb. 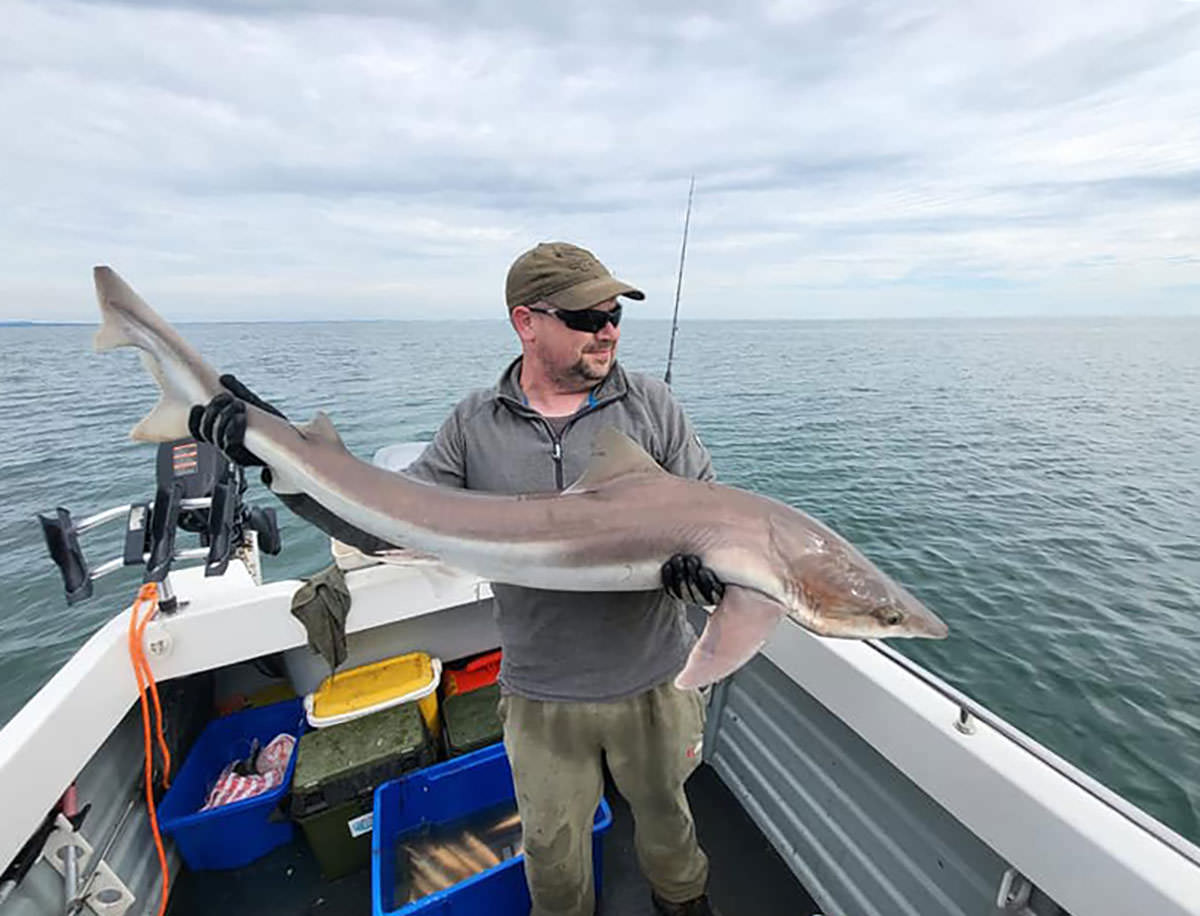 Carl with one of his tope

Truly a amazing day, the sea was like a sheet of glass with porpoise and seals all around us. After 12 hours out they were broken but happy men looking forward to getting out next week hopefully before the big females move out.

Allan Cordwell used up some of his outstanding leave and in need of some downtime he headed out on the Blue Mink was courtesy of Chris Dixon who put him onto a great bunch of lads to fish with who were organised by Andy Shaw.

The boat sailed at 07:00 hrs but due to wind and tide they couldn’t get out to the deeps so they anchored in the channel for a couple of hours fishing for plaice.

Anglers on the starboard side appeared to have the plaice in front of them and a number of nice fish fell to Andy, Chris and Wayne with Barrie on mid-stern getting into the action with Andy also managing a double shot of fish. The rods port side, accounted for a number of tope pups. 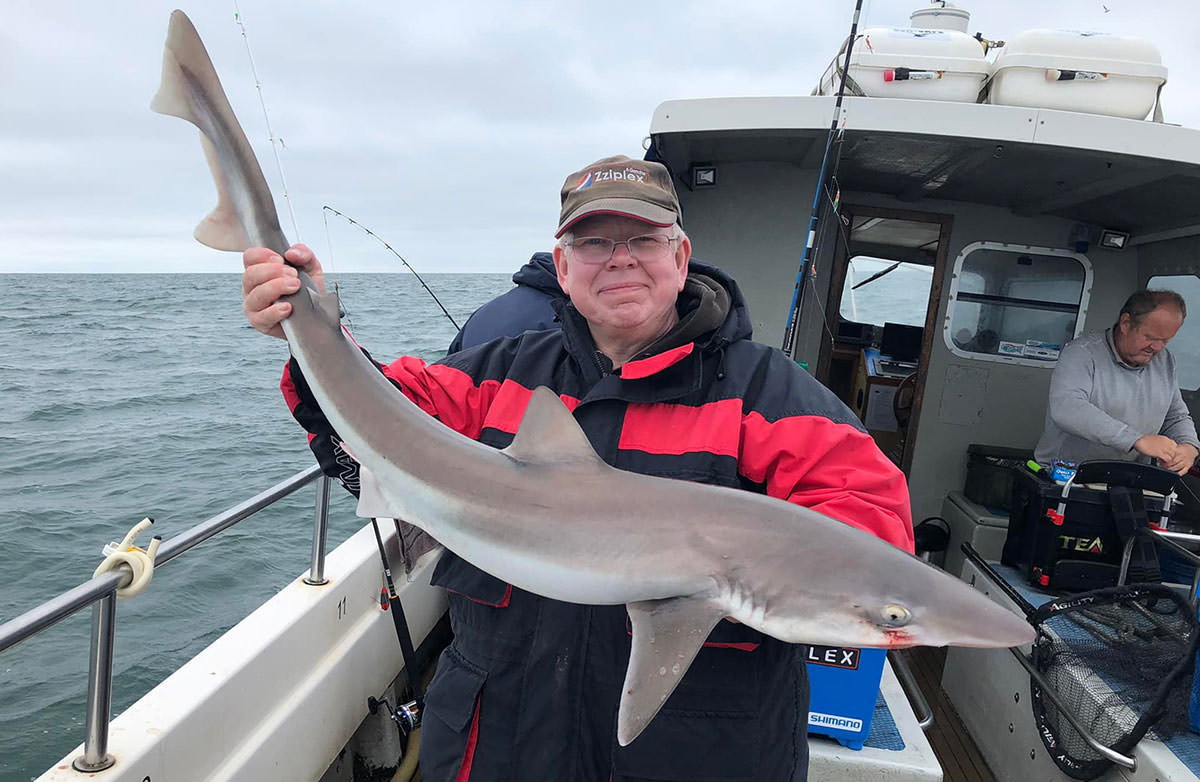 Allan with a tope

Once tide conditions were favourable, they headed out to the deeps. and set about drifting for mackerel for bait and for the first few minutes only picked up whiting and a couple of gurnard.

The anglers eventually located the depth where the mackerel were holding and after a couple of drifts, soon had enough to anchor up and commence fishing for tope, with a few of the fish being too large for bait and more suited for the table.

What followed was a complete tope fest of epic proportions. Within five minutes of Allan’s first drop he was into a fish which was lost, he re-baited and dropped down and almost instantly line was being taken from the reel. A nice upper double graced the deck followed by a further two fish with one into the twenties.

Activity erupted all round the boat with so many fish coming aboard Allan was unable to recall full details other than everyone landing tope and having to be careful where to put their feet. 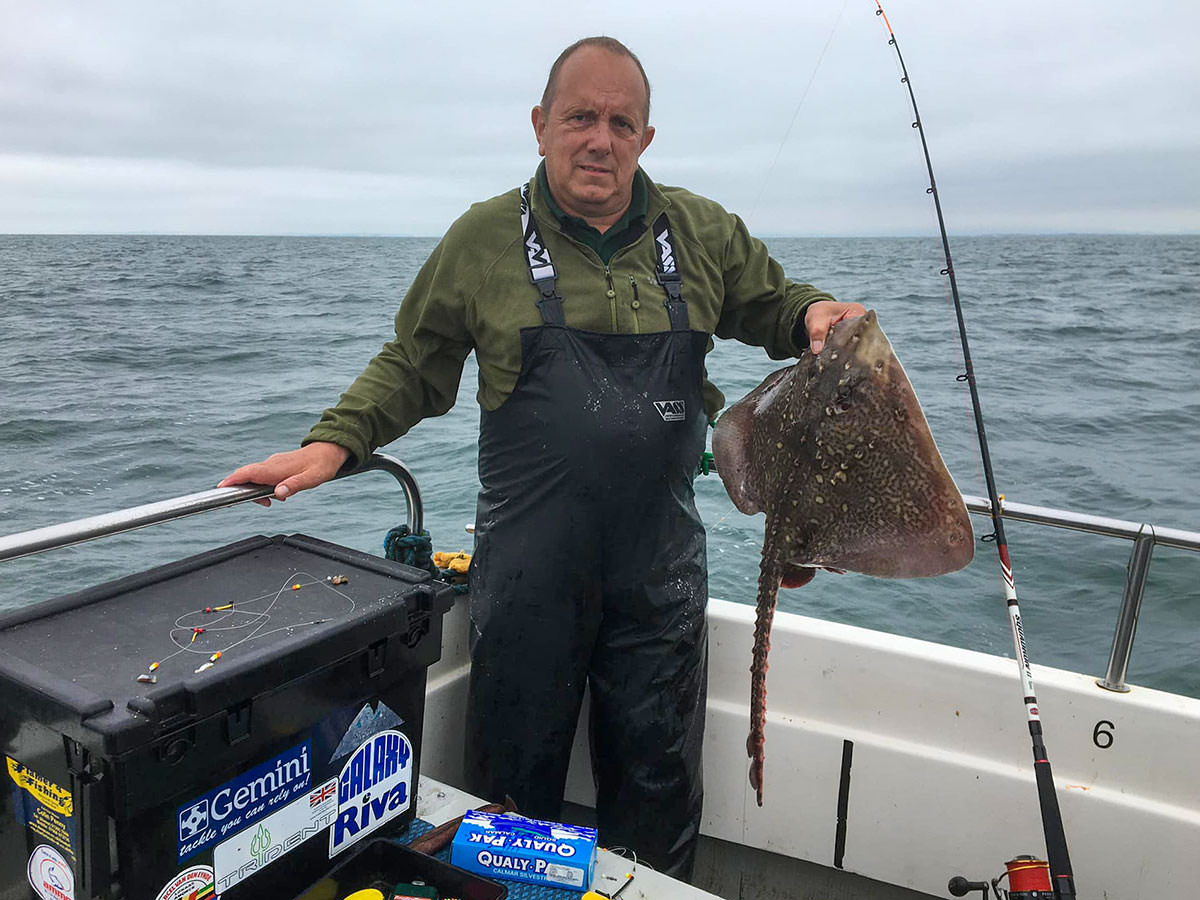 The only thornback for Andy

Barrie and Chris accounted for two nice upper twenties with Wayne following up boarding a twenty after a couple of losses. As quickly as it started, action subsided from the Tope and huss and dogfish made their inevitable appearances with a lone thornback ray falling to Andy.

It was soon time to head for shore reflecting on a great session. It was proper summer tope session for Allan which included plentiful baitfish.

A Brucie bonus of not personally ground baiting the water despite it being a tad lumpy which Allan put down to being kept busy.

Overall he thinks they boated around 14 tope with Allan personally accounting for six together with three nice huss.