A mirror calm sea and perfect hound conditions the day before had been replaced by less than ideal conditions with a refreshing North wind and a lively three foot surf.

Despite the conditions the smoothhounds which were caught were a great stamp, averaging 80-90 cm with the top anglers catching between three and six fish each to frame. Best baits on the day were fresh peeler and hermit crab. 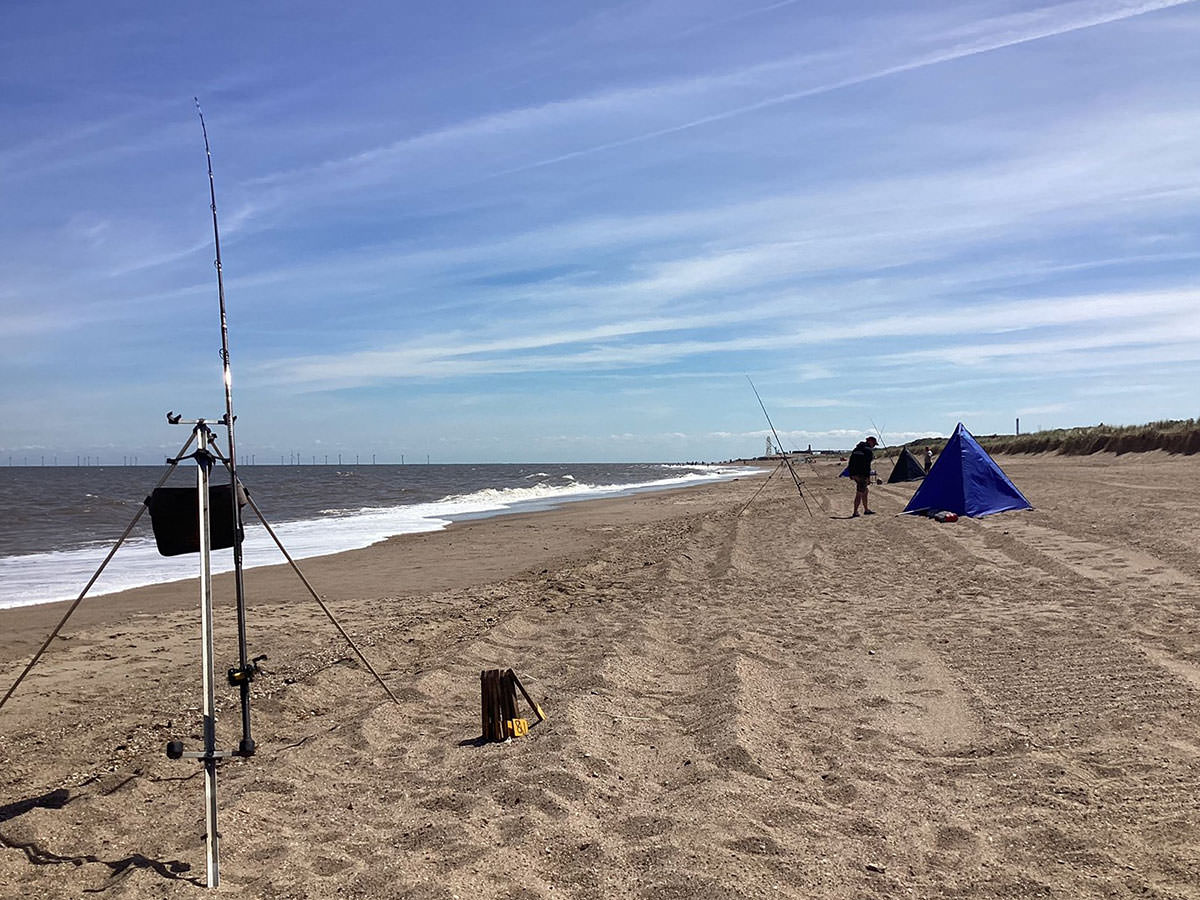 A total of seventeen smoothhounds were caught all at long range bar one. Other species were: a bass, an eel, a couple of flounders and a small turbot.

Richard started the match as he meant to go on catching a hound first cast. He used fresh crab at long range to catch another four good fish up to last hour of the match but then had a lull as the other angler started catching to his left. 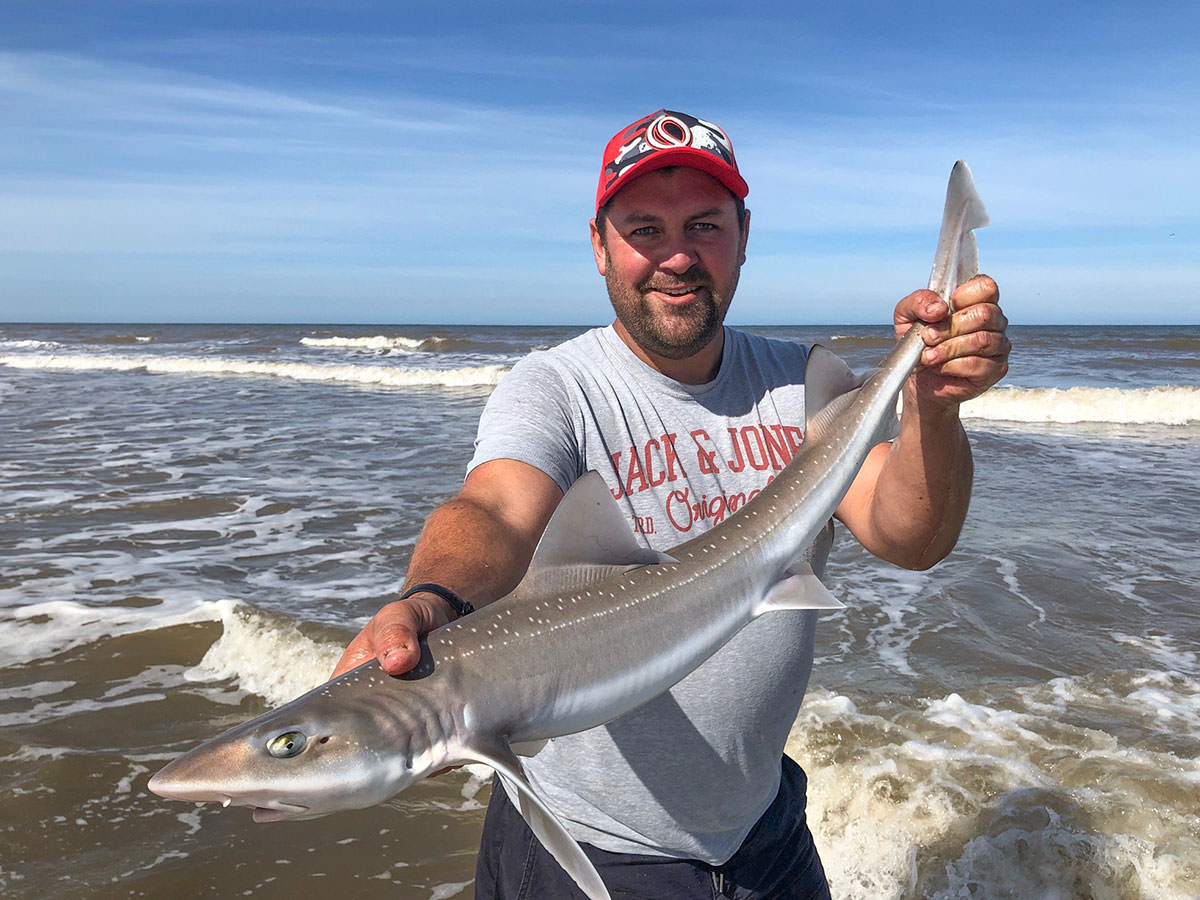 He however stayed out in front and sealed the win on his last cast with another smoothhound for a total length of 539cm. Well done, Richard.

It was great to welcome Troy Francis and Mick Fox to one of our matches, Troy an Irish international, had travelled over to fish Mark Taylor’s Smoothhound open on Sunday and had joined us today. He picked up second place with three hounds for 278cm. 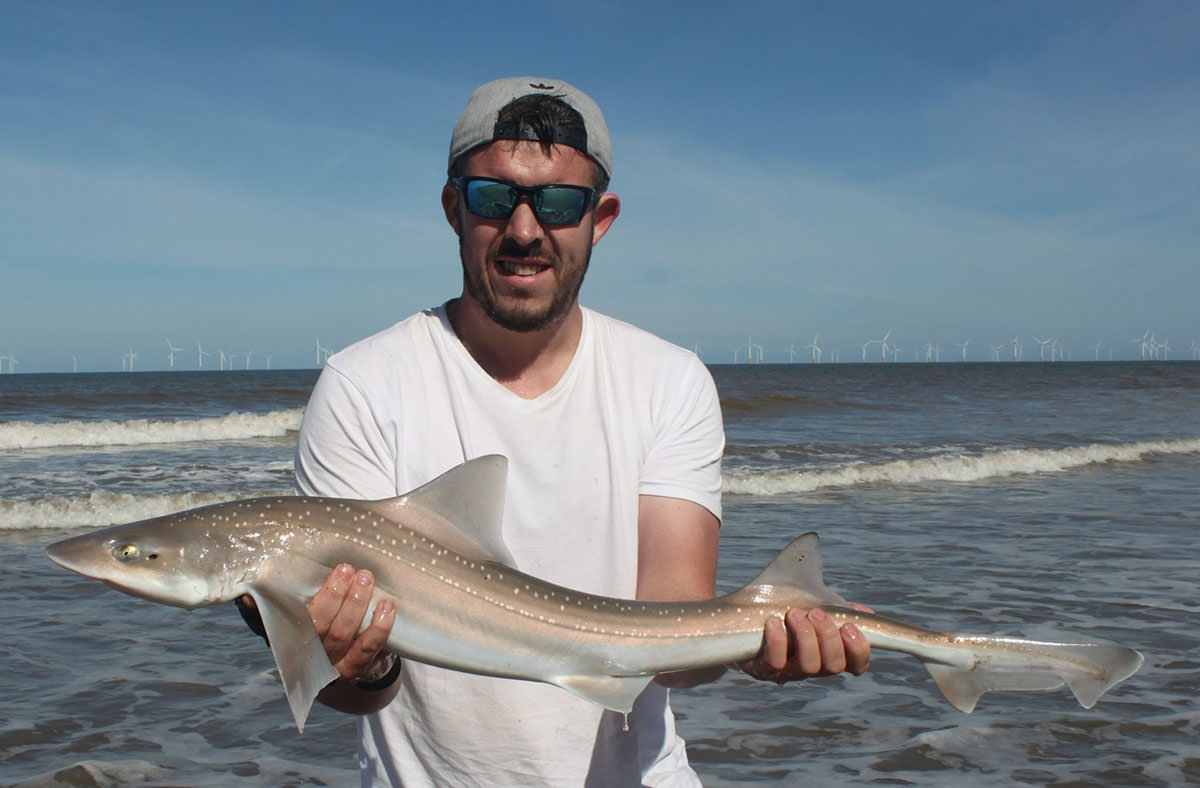 Troy with a very nice smoothhound

He unfortunately lost his first fish in the edge but recovered well catching the rest on the ebb, again at long range with small fresh peeler baits.

In third place was Ian Nelson with 266cm. Ian, who is a great supporter of the club and travels from Grimsby to fish most of the matches caught three good hounds for third place. 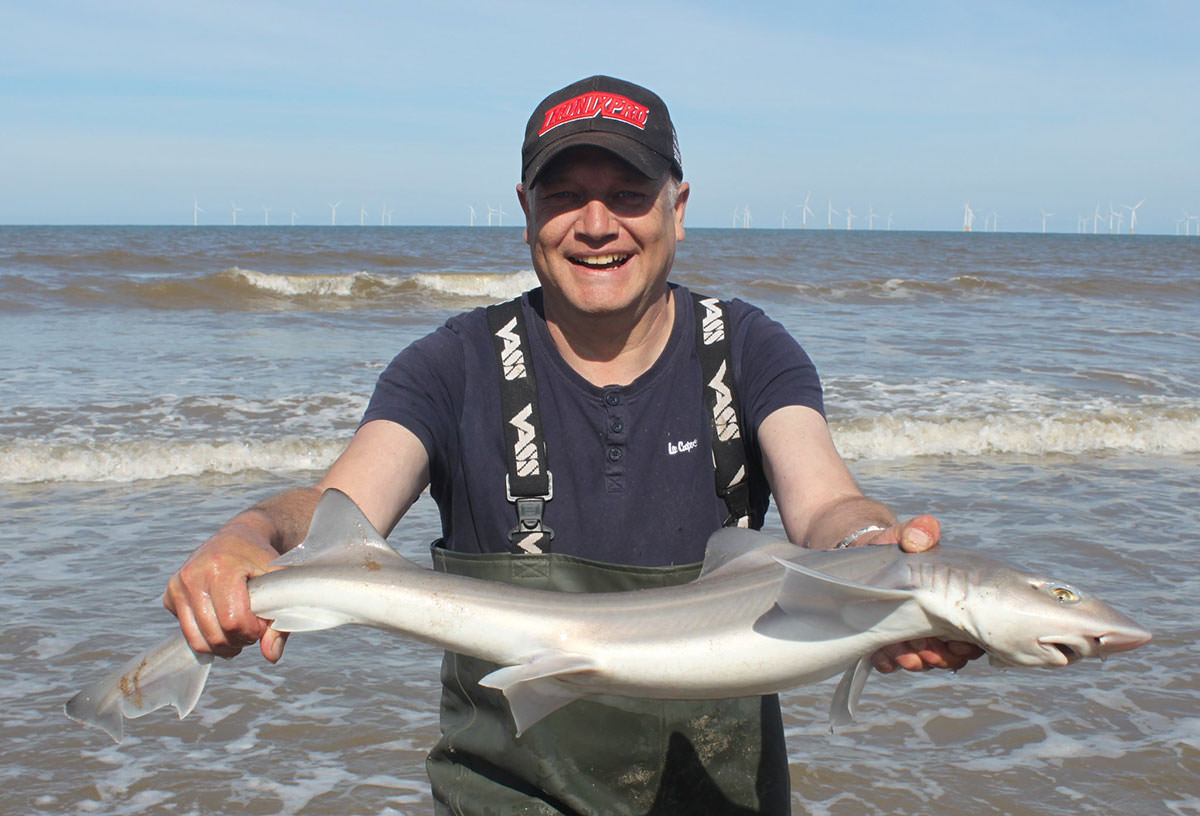 Ian Nelson with one of his three fish in third place

This was especially impressive as he was surrounded by blanking anglers on both sides and still managed to winkle out some quality fish in tough conditions.

To illustrate how hard it was, Adie Cooper had just three bites all match alternating fresh peeler and hermit crab he converted every chance he had of a bite into a fish (a 100% conversion rate) to come in fourth place with a total of 243cm. 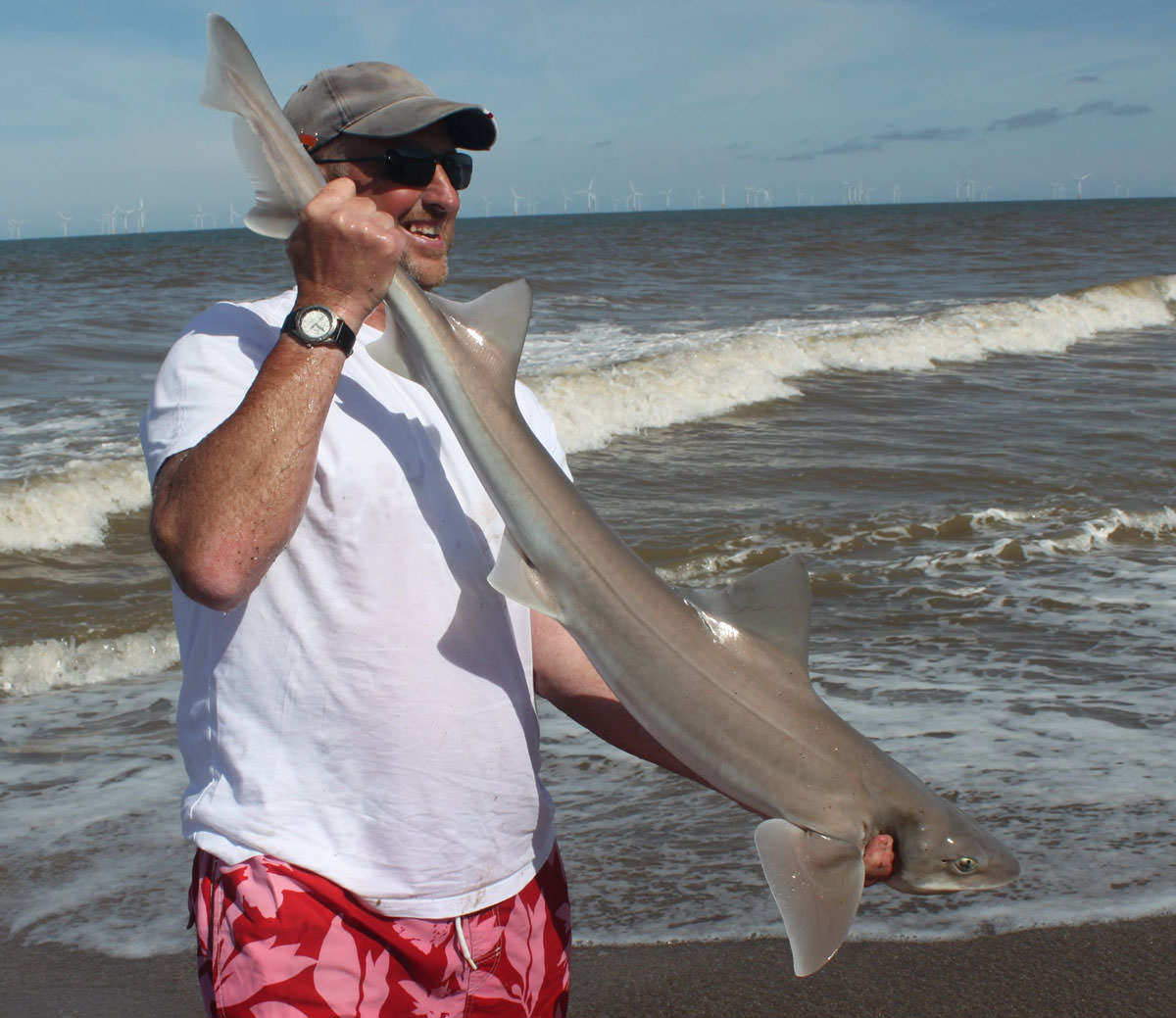 Adie Cooper with the longest fish a 13lb 10 oz hound

Despite catching a nice double figure hound of 122cm for his first fish, his last fish turned out to be a flounder of 29cm. This dropped him down the score board but gave him longest flat as well as longest round fish prizes.

After taking a break for birthday party duties the two Leighton brothers returned to match fishing today and continued to show the ten anglers who blanked how it’s done by catching a bass, an eel, and a flounder between them. Using secret baits, they fished close in to catch some excellent fish which a lot of the other anglers were over casting. Harvey won the match today with an eel and a flounder for 72cm and Hunter caught a nice school bass of 29cm, very well done boys. 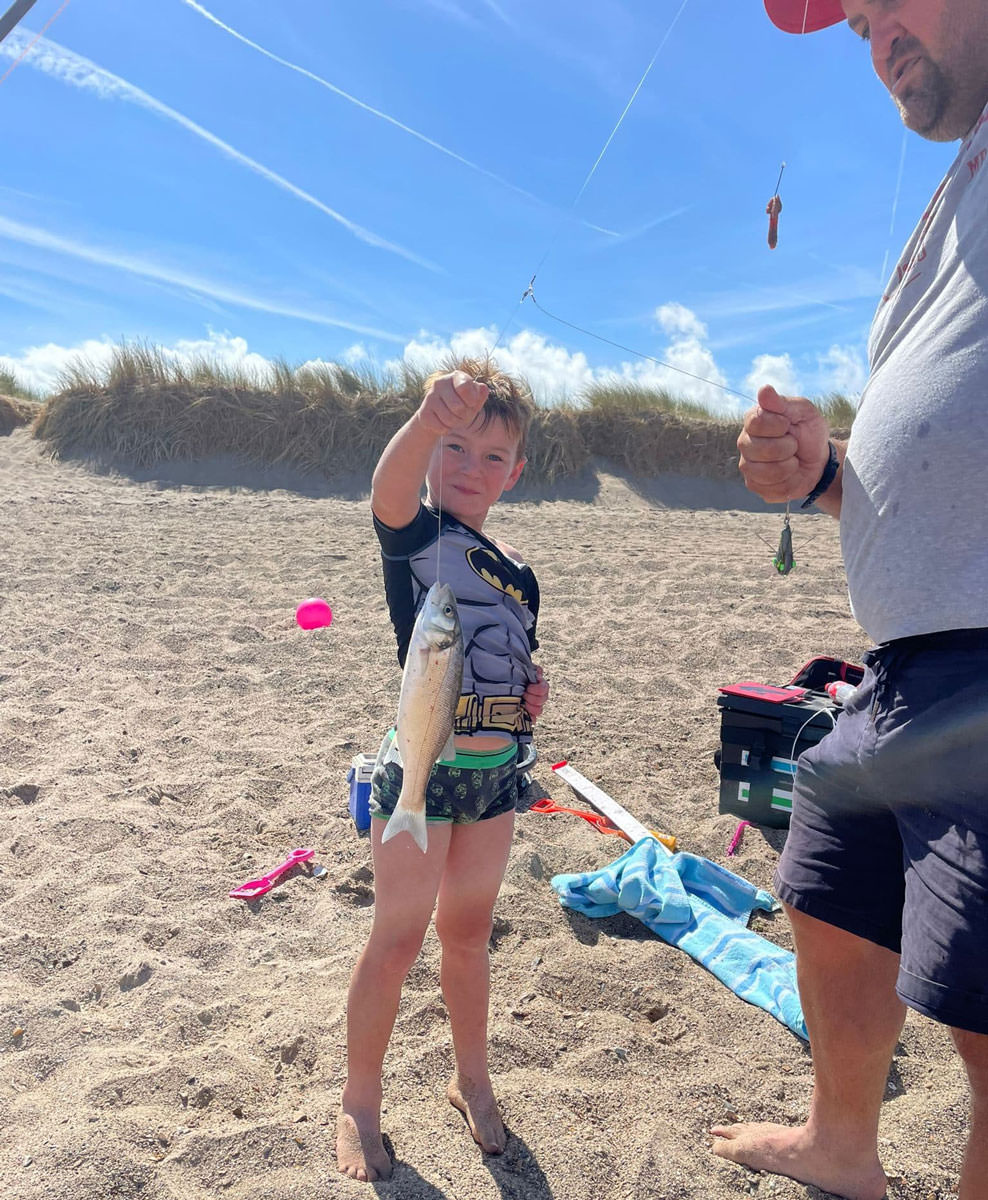 Many thanks to Russell for running the match, Adie for setting out the pegs and to Chas for the great photography and support on the day. The next match is at Skegness boat compound on Saturday 13th of August, and everyone is welcome to fish. I will send the invite out nearer the time as there is a big gap now as we enter the busiest time of holiday season.

We look forward to seeing you all there.