The latest Skegness Pier Angling Club (SPAC) match was held today, Sunday 3rd July from 8:30am till 12:30pm at Chapel Point. A reasonable turnout saw twelve anglers attend, with SPAC Members competing for the Roy Parker Cup, in fond memory of Club stalwart Roy. Parking was in the Chapel Point car park at a reasonable cost of £3 all day, with the early start ensuring that there were plenty of spaces for us.

Conditions were just about “hound perfect”, with a calm sea, bright sunshine and light offshore wind to aid casting. Dave Shorthouse had fished the venue yesterday evening for a bagful of hounds, so expectations were high for a good match. 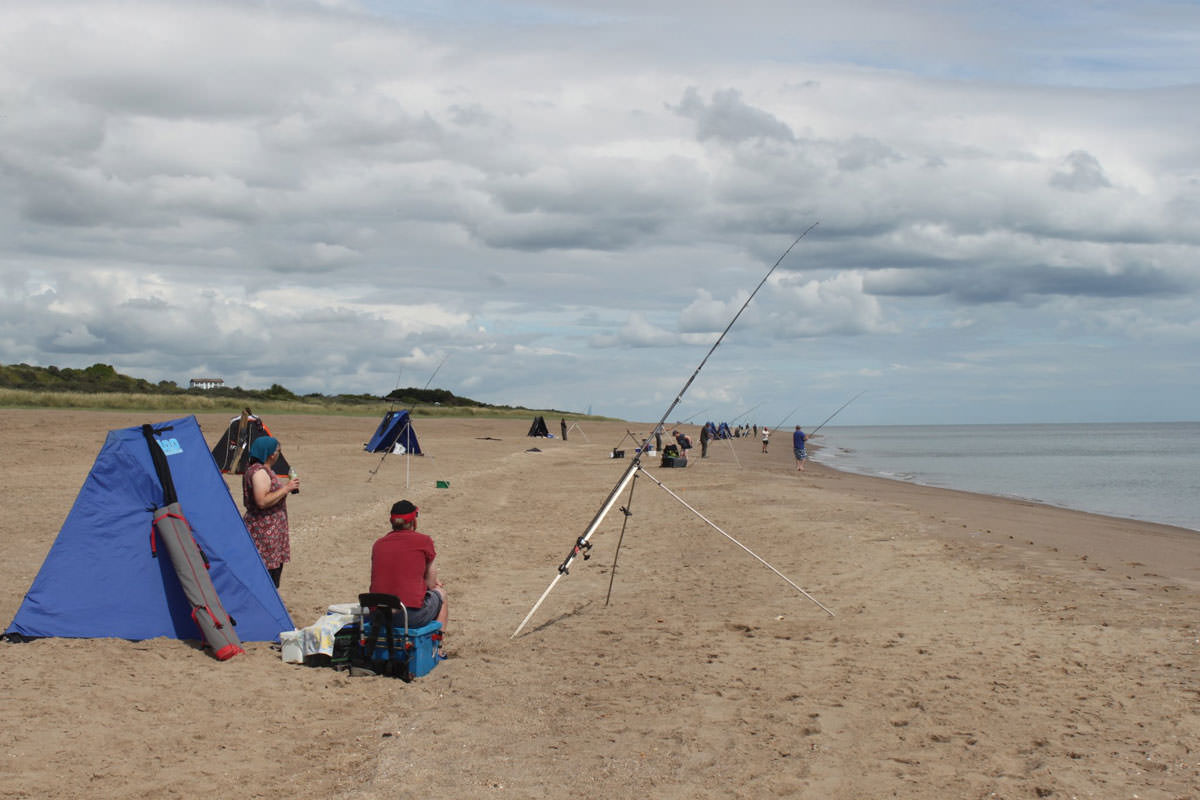 Dave had drawn end peg to the north of the match stretch and was soon out of the blocks with a couple of early hounds. But then it went fairly quiet, with just the odd hound coming out and “hound magnet” Adie Cooper bringing in a tiny tope. 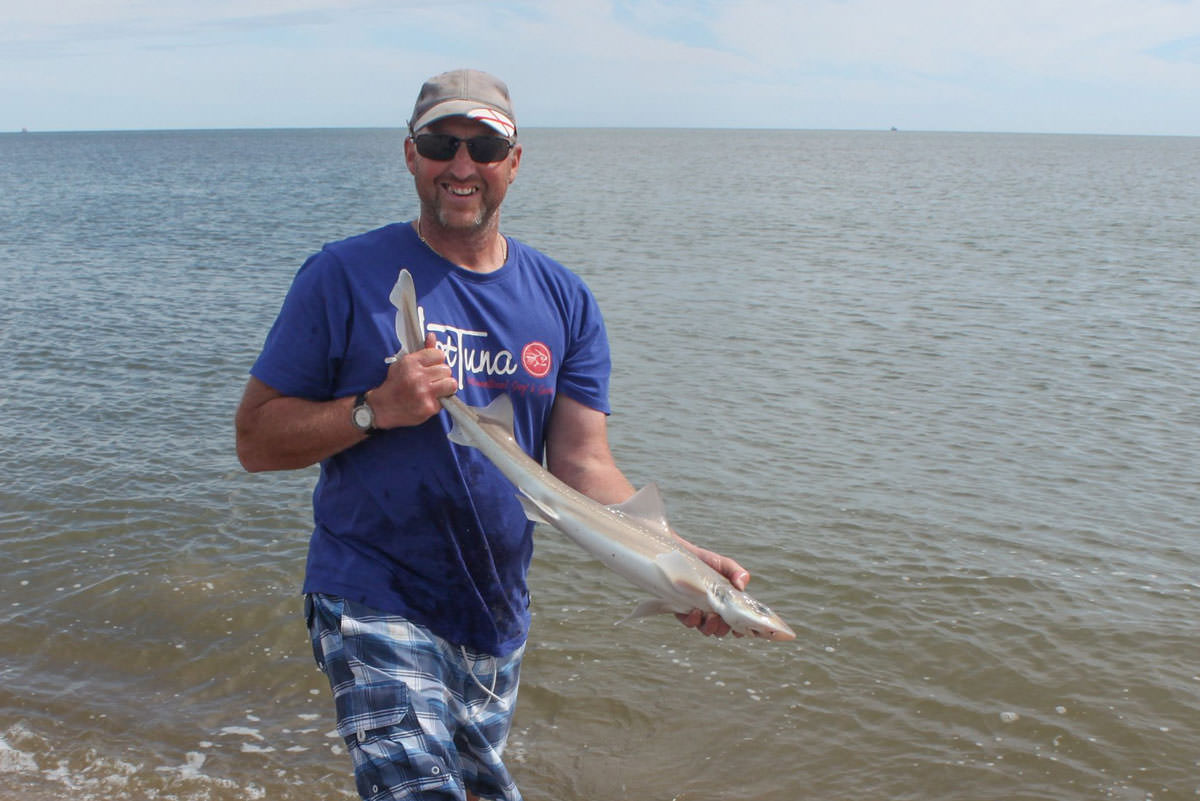 I arrived on the beach just before 11am and as I walked up to Grimsby ace Karl Nangle on end peg at the south of the match stretch, his rod heeled over and it was hound on. Then as he played the fish shore-wards, Adie also struck into a hound, closely followed by another hound coming to Mark Lawson on the next peg. After I had taken photos of all three fish, I was then dashing about with my camera as further smoothhounds came ashore along the match stretch. Although sadly for some, their rods remained steadfastly immobile throughout, resulting in the dreaded blank! 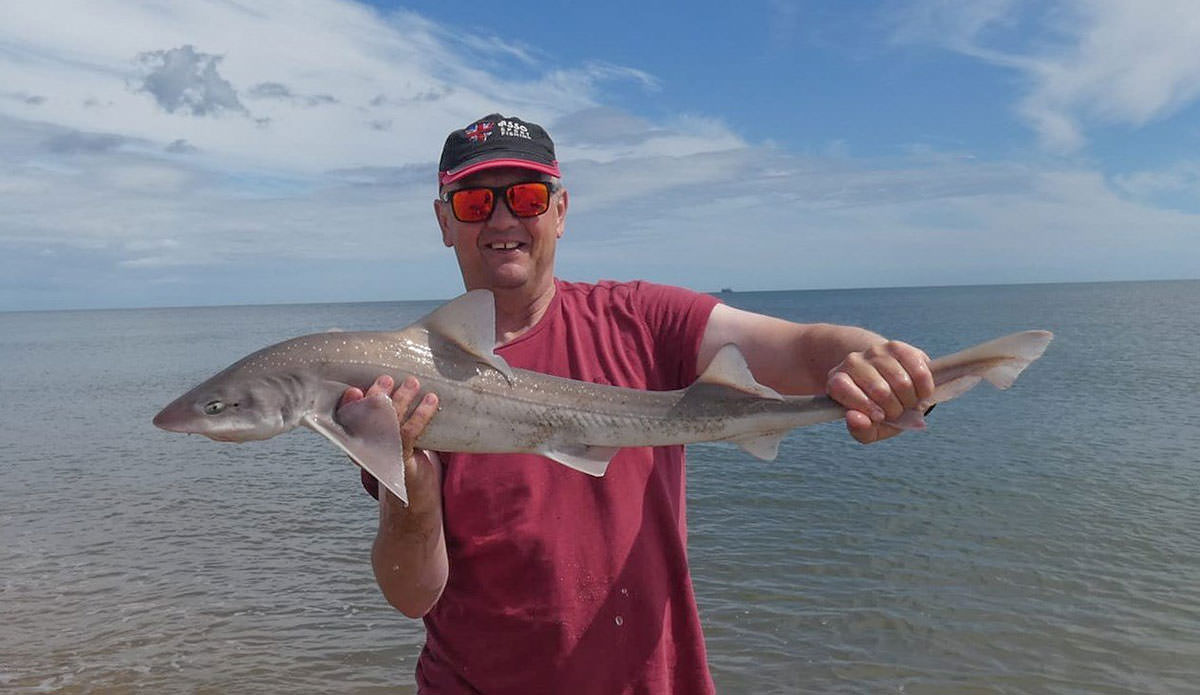 Grimsby ace Karl with a nice hound, which helped him to second place

As the match progressed to a climax, it turned into a three horse race, with Adie, Karl and Dave all vying for the top spot, with Simon Drayton, Ian Nelson and Tony Burman snapping at their heels in supporting roles. But it was a close run thing for the podium places, with the “hound magnet” eventually winning his sixth SPAC match of the year, catching six hounds and the small tope for a total length of 577cm. 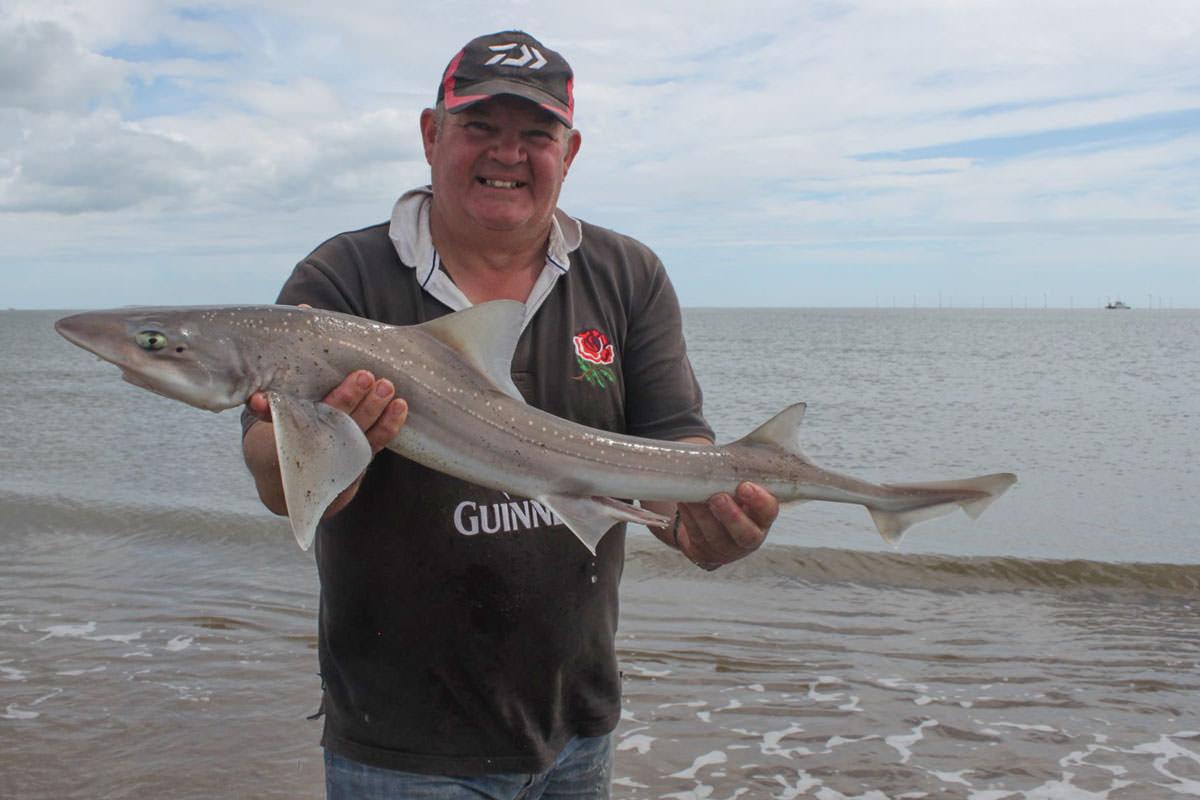 Third placed Dave Shorthouse asked me not to show any photos of him using a mangle, so he could maintain his street cred!!

Adie also won the longest round fish prize with his best hound, which hit the measure at exactly a metre. Just 40cm behind Adie in second place, with six hounds for 537cm came Karl, whose last cast hound was not quite enough for the win. Dave Shorthouse took third podium spot, with 5 hounds for 462cm. Surprisingly there were no flatties caught, with Dave sharing the longest flatfish prize by default with Ian Nelson, both with 99cm hounds. 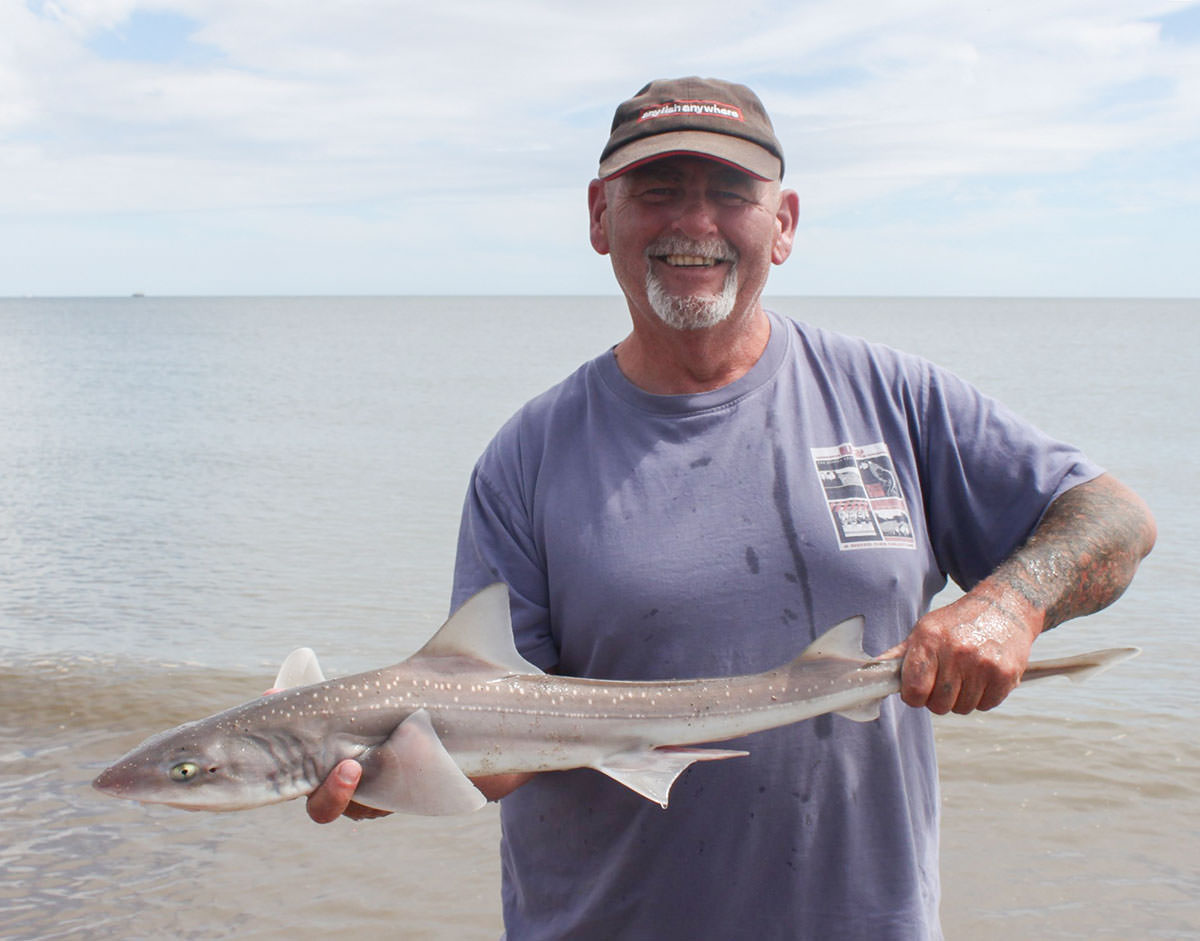 Grimsby ace Simon Drayton, who was only one hound off a podium spot

Roy Parker’s widow Gina, came along to the match and handed out the prizes to the winners. She also presented a bottle of wine to match winner Adie and kindly brought along a tasty buffet for those that fished. Thank you Gina, very much appreciated by us all. 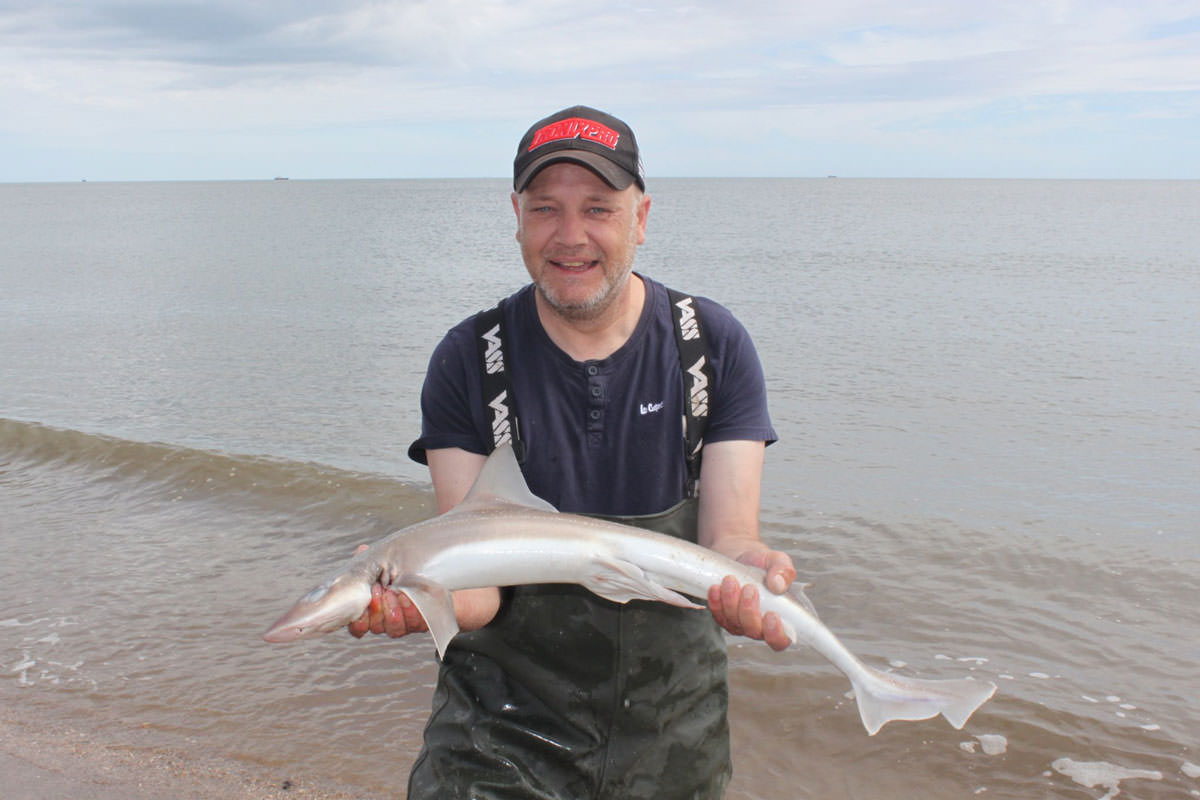 Ian Nelson has been struggling in the last couple of matches, but came good this time with a fifth place

The Aggregate League standings will be published in due course, once I have found the 2hrs needed that it normally takes for me to update the document!! To give everyone a heads up though, Match 10 will take place on next Saturday 9th July from 1:30 till 5:30pm at Trunch Lane from the beach in front of Lakeside Leisure, with SPAC members fishing for Aggregate Points and the Dodsworth Cup. Paul Coulthurst will be putting up the event on this page shortly. Parking will be in the usual car park, courtesy of Lakeside Leisure and Big Catch Tackle. 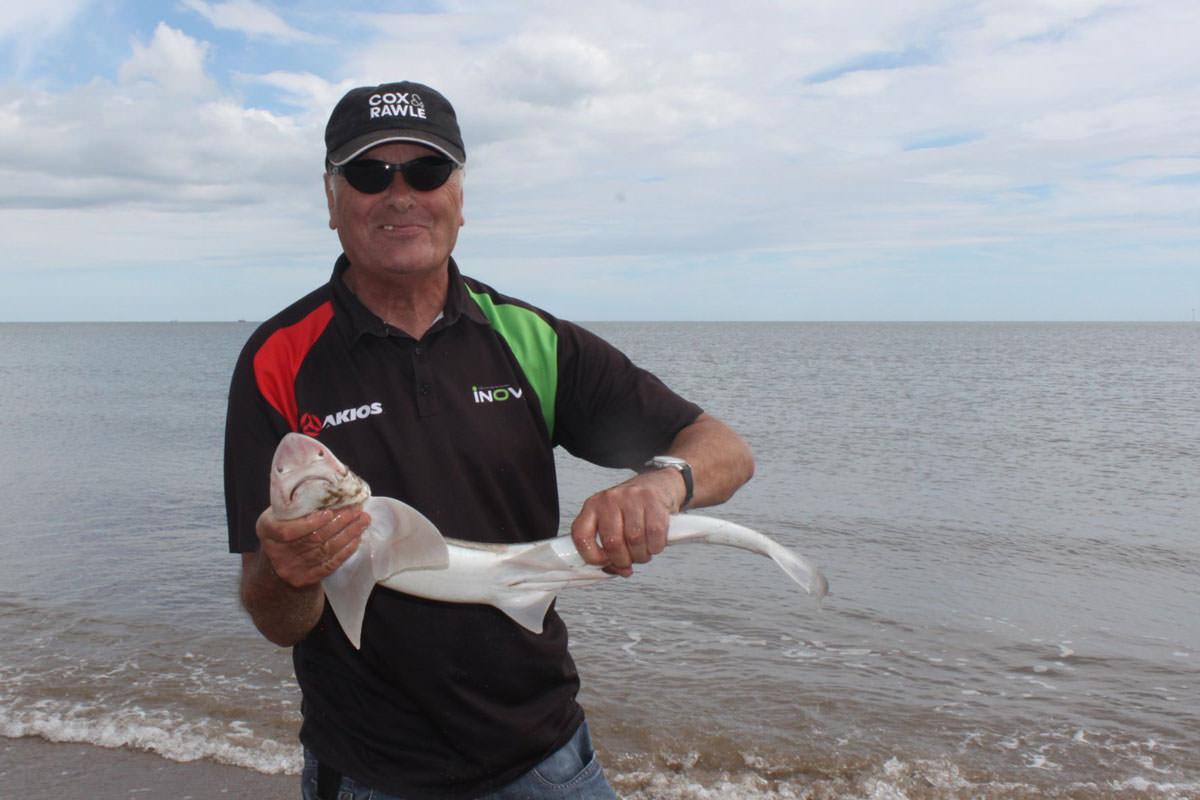 Tony Burman is another top class Grimsby angler and was not far out of the mix, with three hounds for sixth place

Please note that Mark Taylor’s annual Smoothhound Open will be taking place the following day, with the HQ at the same venue. 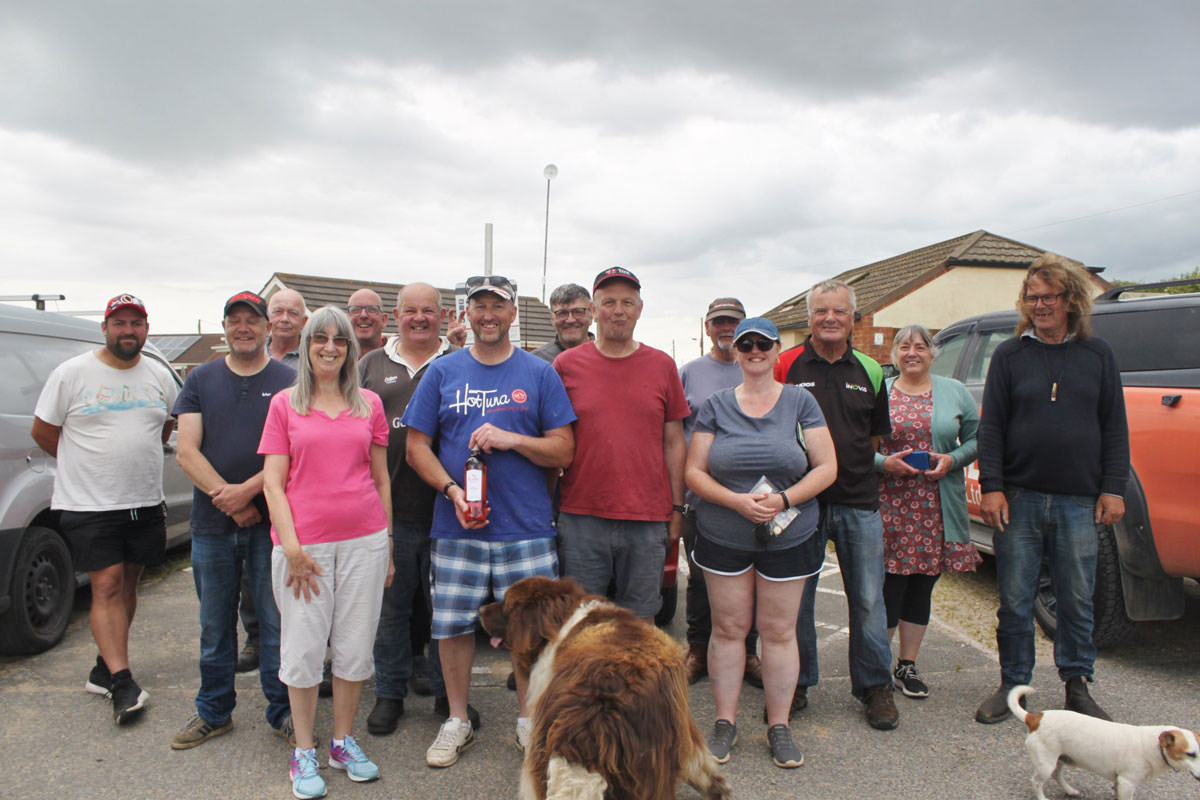 To the winners, the spoils!! Gina Parker (pink top) presented the prizes to the winners, along with a bottle of wine to Adie. Thanks for the buffet too Gina

You will no doubt be pleased to hear that the beach replenishment currently being carried out by the Environment Agency, has now nourished the beach at Trunch and taken out the big sand cliff, which should make it a much better venue to fish.