Movement and some colour in the water over the last few days resulted in double-figure bags of whiting and flatties from the clean ground on worm, mackerel, and squid. Hartlepool’s Steetly pier has been the most consistent mark and gave a few reasonable cod too. Shore sport generally is still very hit or miss however, and a recent Tynemouth A.C. match saw no one weigh in.

Commercial boats continue to report good numbers of cod just offshore, and the Sea Otter 2 from Whitby reported good numbers of cod to 19lb from the offshore wrecks last week. The next several weeks will see bigger spawning cod moving into the Teesbay area with a 20lb plus specimen easily possible. Some big fish have already been reported lost. 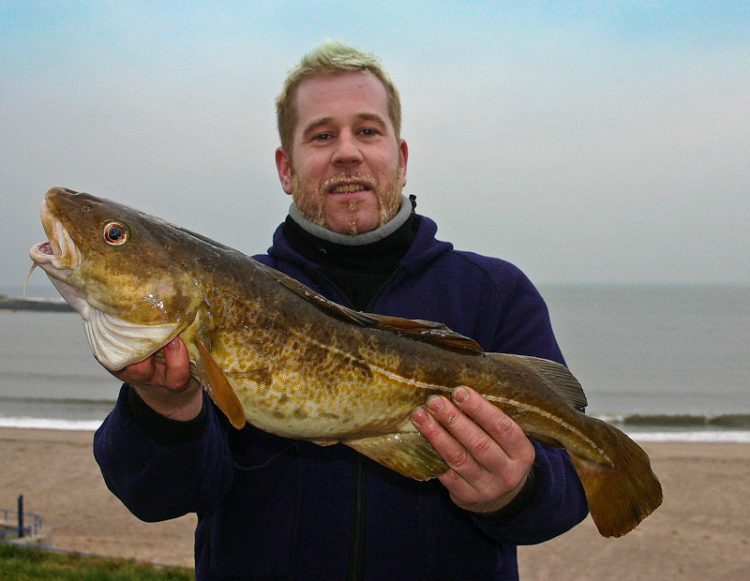 Roker pier and the lower Wear have both fished well for whiting to worm and mackerel, with the odd cod amongst them. And the rocks at Whitburn have produced cod to low double figures – best so far weighed 13 – 08lb for Keith Johnson who also had cod of 7 – 08lb and 5lb.

The last Cleadon A.C. match was won by Lance McVey with a cod of 7 – 03lb. Billy Lea fishing the same match from the cliffs at Whitburn lost a big fish on the lift… it was recovered at low tide and weighed 10 – 02lb. Neil Pringle won a Seaton Sluice match with a cod of 9 – 00lb. Paul Fenech had a pleasure session at Beadnell to land 3 cod for 15lb, best 6 – 13lb. Paul Green fished Marsden to land cod to 6 – 14lb.

Size fish were hard to find in Ryhope Tuesday Evening Sweepstake where only 6 from 38 weighed in. Joe Grieves had a cod of 700 grammes from Souter Point; Darren Welsh took second and third place with whiting of 505 grammes and 395 grammes; and Grahame Peart was fourth with a whiting of 385 grammes.

The first Ryhope club match of the year had a good turn out with 108 members fishing, but only 12 managed to weigh in 14 fish. Worthy winner was junior angler Lliam Prest with a bass and flounder from Whitburn for 1490 grammes. Liam’s is bass was the h.s.f. at 1200 grammes. M.Telford had a cod of 870 grammes from Souter Point; Joe Wilton had 2 flounders from the Wear for 695 grammes; Keith Wilcox had the h.s.flatfish with a flounder of 590 grammes.

Coming up: The Easington Open is on Sunday January 25th with fishing from 11am till 4pm between Ryhope Dene to Crimdon Dene. Al- in entry is £12, tickets are available from selected tackle shops or on the day from Seaham Leisure Centre from 9am till 12 noon. Top prize for the h.s.f. is £2000 plus a full supporting prize table.

Sunday February 1st is the 14th Dave Jobson Memorial Open organised by Blyth S.A.C. with fishing from 10.30am till 2.30pm between the Tyne Bergen Quay and Pattersons Garage Beadnell. Basic entry is £10 plus optional pools etc. Juniors under 16 are free if accompanied by a paying adult, and juniors under 14 must be accompanied by an adult. Register at the Ridley Park Hotel Blyth from 8.30am till 9.30am. First prize for the heaviest bag is 50% payout and 100% payout for the h.s.f.