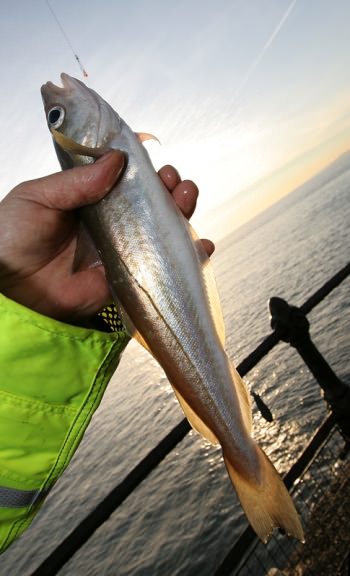 Shore sport has quietened down a little over recent days, particularly for cod, and few anglers have ventured out onto the exposed piers or beach marks during the very windy weather.  Whiting are an increasingly common catch but are still not present in the huge numbers of previous years.  Most of the whiting seem to be south of Seaham, along the Durham beaches and into Hartlepool where some big specimens up to the 2lb mark have been taken.  The better numbers of cod seem to have moved just offshore out of reach of the shore angler.  The Sapphire out of Sunderland specialises in uptiding during the winter months and continues to take good numbers of cod to 4lb or more, sometimes just a couple of hundred metres off from the local shoreline.

Roker pier has fished well for whiting, cod and coalfish on some tides if you can tolerate the recent windy conditions.  Best cod reported from the pier is one of 5lb taken by Callum Grey.  One of the better pleasure sessions of late saw Paul Riley land two cod of 7lb 2oz and 6lb 9oz taken at the Falls.  A Tynemouth winter league match saw Marty Elliot win with three cod weighing 8lb 14oz, the best weighing 4lb 7oz,  taken from Castle rocks followed by Paul Wright with two cod and two flounders for a total of 4lb 7oz.

The Tyne is fishing very well at present with cod established as far upriver as the Copthorne Hotel, and on some tides even further upriver, six or seven miles from the river mouth.  The Wear by contrast has been very poor with just the odd smaller cod and coalies in the lower river and the odd flounders further up.

The Ryhope Christmas match saw most of the fish weighed in taken from the Tyne on a quiet day when few whiting showed from the piers in the relatively settled conditions.  Chris Hossack fished well up the river Tyne to land a nice bag of cod with six for 6kg, best 7.1kg.  Dave Mould had five cod weighing 4.22kg, Paul Hossack had five for 3.65kg, Aung Win had the best flatfish of 0.38kg and top junior Matthew Win had 0.49kg.

The Moonfleet two day open fished in the Tyne saw 108 anglers compete over the two days.  The top three aggregate bags were taken by Bill Buckley, Steve Smith, and Robbie Cowan.  Brian Carter had the longest fish on day one with a cod of 51cm, Micky Bell had the best on day two with a cod of 43cm.  A Cleadon match saw six out of the 29 anglers find fish with Roker pier, Marsden rocks and the Tyne all producing at least a few small cod on the night.  Darren Browne managed a cod of 4lb 12oz in a four fish bag of 9lb 12oz from Roker, and B. Heslop had two cod totalling 3lb 4oz from Marsden.

There are plenty of open and sweepstake matches over the holiday period with several catch measure and release matches in the local rivers where, if the windy weather continues, you can at least get a bit of shelter.  Most of the local tackle shops will have plenty of posters up advertising the details.

The Seaham Boxing Day Heaviest Fish Open will be fished from 12 noon until 5pmbetween Hendon Groyne (excluded), to Hawthorne Hive.  The North pier will have 100 pegs available, weather permitting.  Basic entry is £10 plus optional pools and team events.  Register at Seaham clubhouse from 10am until 11.30am.

The Blackhall Navy Club Get Carter open is on Saturday December 27th fishing from 9am until 2pm.