Sea angling is now on top form for both the shore and boat angler despite the seemingly ever present east to north easterly winds keeping the mackerel well offshore. The region’s rivers are full of flounders, coalfish and occasional codling, the piers are producing coalfish, plaice and cod, and the Northumberland rock edges have the summer kelp cod in residence plus the expected wrasse, coalfish, and increasing numbers of specimen pollack.

The river Blyth is often a forgotten venue but the last Seaton Sluice match here saw nine out of 10 weigh in. Phil Smithson had eight fish for a total length of 238cm, Kevin Moffat had nine for 234cm, Michael Thompson had six measuring 143cm, and John Adamson had the longest fish with a coalfish of 38cm. The upper Wear has some nice specimen flounders showing, Mick Quayle had a recent session taking 30 flounders to 37cm. As with previous weeks fresh crab is the main bait in the Wear, but ragworm and mackerel is the top bait in the upper Tyne.

Neil Garner won a Tynemouth match with nine flounders for a total of 5lb 13oz, Shaun Brandon had the heaviest fish; a coalfish of 1¼lb. A Tynemouth retired member’s match saw Bob Gascoigne win with five dabs, two coalfish, the best weighing 1lb 6oz, and a flounder totalling 6lb 2oz. There were plenty of fish on the day with 14 out of 17 landing mixed bags of dabs, coalfish, flounders, and pollack.

Pollack are now so common that fishing from a suitable shore mark or boat fishing over hard ground almost guarantees that a few will be taken. Jay Kelly fishing on the Debbie I out of Hartlepool landed one of the biggest ever recorded from the North East when a monster of 18lb took his Norwegian pirk lure. The same trip produced good numbers of cod around the 6lb to 8lb mark. Up at Eyemouth where shore angling is restricted by high cliffs, there are good numbers of cod and pollack resident just metres from the cliff edge. Walter Turnbull and friends fishing right under the cliff base from Walter’s boat Charlotte took 35 fish one trip, and 60 the next, both producing cod to 8lb and pollack to 9lb. 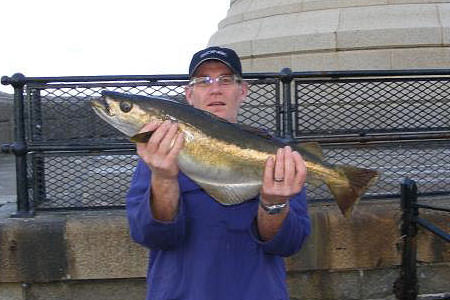 Other boats out of Hartlepool are also doing very well, all reporting good numbers of cod, ling, pollack, and on some days huge mackerel shoals. Five anglers on the TJ Gannet took 40 cod, the majority up to 10lb, with the best at 17lb. Anglers on the Danny Boy had so many cod around the 3lb to 4lb mark that they stopped keeping them and returned all the rest taken during the day which included specimens up to 7lb. Steve Nest on the Ali Cat had 16 cod to 12lb, while Steve Halliburton on the Famous had a ling of 9lb on fresh mackerel bait as part of a 16 fish bag, Dalton Sharp had ling to 11lb and cod to 10lb, and John Stoker had 10 cod to 7lb.

The Delta Barbara and the Sapphire out of Sunderland have been taking up to 50 cod per trip, mainly up to 5lb. The Serenity out of Amble reports taking up to 40 bigger fish to 11lb during recent trips. The Sarah JFK out of the Tyne produced a ling of 17lb for Paul Corbishley; Neil Grace had a cod of 13lb, with other anglers taking good numbers of doubles plus pollack to 8lb.

The Bedlington Station Summer Open is on Sunday July 8th fishing from 11am until 3pm between Tynemouth Pier and Seahouses South Pier. Seaton Sluice harbour and the rivers Wansbeck, Coquet, and Aln are excluded but Blyth pier is included. Minimum prize is £200 for the heaviest bag, £100 for the heaviest round fish, and £50 for the heaviest flatfish, plus supporting prize table. Basic entry is £10, juniors free if accompanied by a paying adult. Register at The General Havelock, East Sleekburn from 9am until 9.45am. Weigh in same venue from 4pm until 4.45pm. This is a Penn points match.

Pollack a Plenty in West Cork