Pollack a Plenty in West Cork

Copper burnished sides, bottle green back, with their huge eyes and jutting jaw, pollack are a handsome predator designed to ambush small bait fish from below, swimming up from the dark depths at lightning speed akin to a fighter pilot attacking out of the sun. Present all around our coastline they are particularly numerous along our south western sea board and can grow to a very large size, double figure pollack on some deep water marks being a real possibility with the average size certainly running four pounds. A recent trip to a favourite West Cork haunt provided superb pollack fishing from a variety of shore locations along with an eye opening first kayak trip for close friend Gary Robinson. 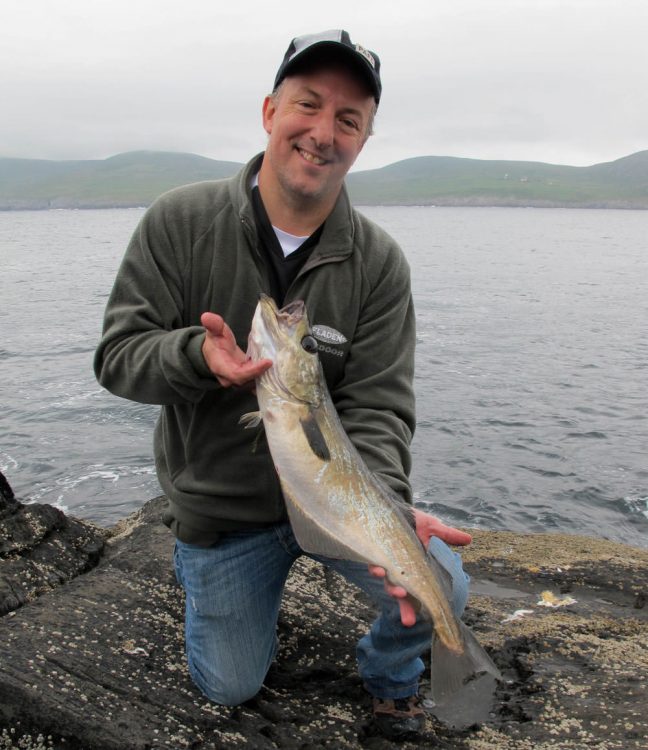 Pollack like deep water kelp laden habitats where rock pinnacles or steep cliffs rise sharply upwards, the Beara peninsula in West Cork being home to an abundance of such marks. Jelly worming is a technique that lends itself well to these locations and over the last few days produced superb fishing for my friends and I. With depths ranging from 40 to 90 feet the experience is like gilling from a boat and equally as fun with on occasions a fish a chuck the order of the day. Rigs comprise Mr Twister worms threaded over 2/0 round bend hooks attached to 4/6 feet of 9.kg amnesia line, swivel, main line, bead, and running 60 gram barrel lead, which are then cast out and allowed to sink until the lead hits bottom whereupon the retrieve commences.

Reeling slowly the jelly worm rises up at an angle from the sea bed imitating swimming sea worms or sand eels. The pollack see the silhouette rise up and engulf before kicking the tail, turning and swimming back down again. To the angler a first sign is a weight coming on the line as the pollack grabs hold of the worm tail, just keep reeling and don’t strike. Eventually the fish will have all the bait in its mouth whence it will crash dive for the bottom, that’s when the fun starts.

Have the drag set right and hold on, during this trip friends Roger Ball, Gary Robinson, and I got smashed by fish diving towards Neptune’s lair with incredible speed and power. Allowing for that we still landed shore caught pollack to 8.lbs 4.oz and kayak caught fish into double figures, we know this because Gary brought two fish home which were gut hooked, one weighed 9.lb 4.oz hours after capture which was dwarfed by a fish he caught and released later. The shore pollack fishing we experienced this week was superlative and as for the kayak angling, “ridiculous” said Gary, he’d never caught so many large fish in his life. Without doubt big pollack are a sport fish to be reckoned with, in my opinion right up there with bass. They may not have the staying power, but that first crash dive, wow……. 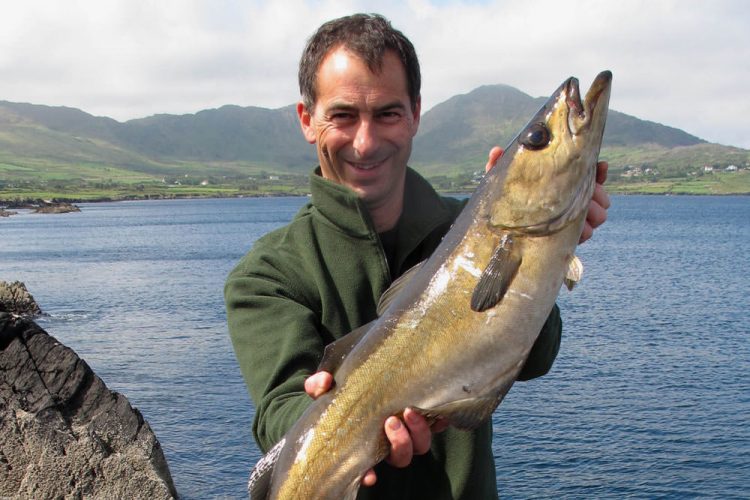