While freshwater anglers in South Wales and the Bristol Channel are bitterly disappointed that the Secretary of State for Energy & Climate Change has this week given development consent for the massive tidal lagoon hydropower project proposed for Swansea Bay the causeway may provide a new venue for shore anglers if access is granted. They are extremely concerned that the untested technology will have a major impact on marine and migratory fish stocks in the Severn Estuary and the Rivers Neath, Tawe and Afan, which are important for salmon, sea trout and sea angling. Throughout the planning process leading up to this week’s decision, Fish Legal, which has been representing a number of member clubs on the rivers, has highlighted significant shortcomings with the modelling of impacts on fish and the monitoring methodology proposed by the developers. 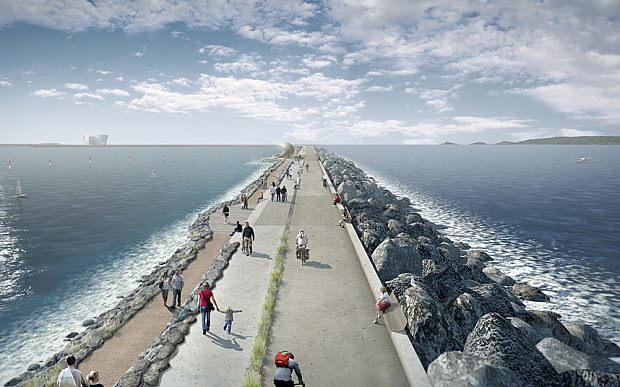 There is little data about the migratory behaviour of fish in the Bristol Channel and in estuaries more generally, but the developers have claimed a high degree of certainty that the impacts will be very small. Fish Legal believes that this claim simply does not stand up to scrutiny. The project is intended to commence in 2016 but effective methods for monitoring impacts on fish have still not been agreed. In order to establish the impacts accurately, population ‘baselines’ would have to be assessed for many years before development gets underway, yet this work is only now starting to be undertaken. The Secretary of State accepts that there are risks to the fish populations, based on the recognised uncertainties, but says these can be met by adopting a proposed ‘Adaptive Environmental Management Plan’ (AEMP), which will supposedly allow the developers to alter (or ‘adapt’) the way the lagoon is managed as and when impacts are identified. Fish Legal and the local angling interests have expressed concern that relying on monitoring ‘after the event’ in this way means the belatedly identified impacts may be irreversible or too costly to correct. The Department of Energy and Climate Change (DECC) has however recognised Fish Legal’s concerns in its letter granting consent and the Secretary of State has required that as part of the AEMP a “rigorous” and “enforceable” monitoring and mitigation plan – presumably including committed long-term funding and independent scientific oversight – is in place before any work commences.

DECC has also refused the developer’s request for disapplication of the Salmon and Freshwater Fisheries Act 1975 and the Eels Regulations 2009 so that it wouldn’t be required to take certain preventative measures to protect salmon, sea trout and eels. Instead the decision about screening and other mitigation measures therefore continues to rest with Natural Resources Wales, which enforces these regulations. The Secretary of State has also required that acoustic fish deterrents should be installed as a preventative measure. Finally, she has insisted that actions must be taken to modify the project if agreed thresholds of impact on fish are exceeded. Swansea Bay is the first of many proposed lagoons around the country and the Angling Trust & Fish Legal have launched a fundraising initiative to help them campaign and if appropriate take legal action to protect fish in Swansea Bay, elsewhere in the Severn Estuary, in North Wales, the South West, the North West and anywhere else proposals for tidal lagoons and tidal barrages appear. Marine and particularly migratory fish stocks are already in serious decline due to pollution, over-abstraction, habitat destruction, commercial netting, predation, barriers to migration and climate change. Anglers are very concerned about this additional threat to those stocks.

Mark Lloyd, Chief Executive of the Angling Trust and Fish Legal said: “Our organisations have campaigned vigorously to highlight the huge uncertainty about the impact of this lagoon on an immensely sensitive and important environment for marine and migratory fish. Whilst the pressure we have applied has secured some helpful concessions, we are very disappointed by the decision to grant consent, which could have a major impact on salmon, sea trout and sea angling in the area. It is simply not possible with the current understanding of fish behaviour for anyone to model the impact on fish of this technology with the levels of confidence claimed by the developers, and effectively accepted by the Examining Authority. We will be looking at the possibility of a judicial review of the decision to grant consent, but the new planning laws make that more difficult than in the past. We hope very much that Natural Resources Wales will enforce properly the Salmon and Freshwater Fisheries Act and the other regulations for which it is responsible.”

Andrew Kelton, solicitor at Fish Legal, said: “Anglers, and others with a concern for the natural environment, have seen this sort of process at work before as large-scale industrial infrastructure is installed in once-pristine inshore waters, most notably in the planning and regulation of the salmon farming industry in north west Scotland (which it is now generally accepted has had a major impact on salmon and sea trout stocks in the area). The lesson is that where development in this sensitive and complex environment is ‘fast-tracked’, as in the present case, avoidable mistakes will be made and nasty surprises are likely to occur, and once the infrastructure (as well as the vested interests) are in place there is little that can be done to rectify matters. It is in our view essential to commission the necessary science (including rigorous monitoring), and to ensure careful independent scrutiny, from the earliest stages of such developments. We regret that this has not taken place early enough in the present case, so there is a lot of catching up to do (at best) now that permission for the project has been given.”

Ray Lockyer, Secretary of Pontardawe and Swansea Angling Society said: “I have been fishing these rivers for many decades and have seen them restored to become a real asset to the local community for sea trout and salmon angling. This lagoon could threaten our way of life in South Wales and the anglers in our club, and others in the valleys, are bitterly disappointed by this decision from the Secretary of State to grant consent for it to go ahead. We are very grateful to the Angling Trust & Fish Legal for their support in winning some concessions and we will continue to work closely with our representative organisations to try and protect our fish and fishing for future generations as the process unfolds. We can only hope that Natural Resources Wales enforces the eel and salmon regulations properly.”