Saturday 20th September saw us set sail for the first of our autumn / winter fun matches. Weather conditions were great for what was to be a less than serious angling competition. The big tides of 32 feet meant that the fishing would be kept fairly local in Holyhead bay, with a run out at slack water to the mussel beds.

Despite the fun element, the day was planned to test the anglers with varied fishing over different grounds. Our day started approximately a mile from Holyhead breakwater on a small bank of mud that throws up all manner of species from dogs and whiting to huss, rays and tope.

Fishing started well for most on board, while not hectic a constant stream of dogs, whiting and poor cod came over the gunwales, broken only when a cry of haddock came from Gareth P on the port side. Having already amassed an excellent list for 2009, Gareth was soon camera and species card in hand to record his fifty-third species of fish from British waters this year, a great achievement.

Pete Minns added two haddock to his tally, and quite possibly the smallest codling I have ever seen; speedy our old Goldfish was bigger!

With the tide book showing slack water at 1230 we moved to the mussel beds for 1130 to catch the last of the flood and hopefully a few huss. Sadly though, my timing or the tide book was slightly out and we arrived at slack tide. We had a brief 45mins on this mark before the tide ran through like an express train. After a fruitless session at anchor on the mud, Simon finally got into the action over the mussels with dogs and whiting. More dogs and whiting later, and a solitary dab for Jon Law, we upped anchor to go onto the drift for wrasse and a few pollack.

Drifting over the shallow reefs around Holyhead is a firm favourite of mine, and a style of fishing we’ll try to fit in during a day afloat. With the big tides and slight east wind we opted for a west facing patch of rocks where we spent an hour in search of wrasse. Ian was the first to land a small pollack, not in size for the pan, but as we were fishing Catch & Release all size of fish count – six points for Ian, with  Gareth P recording the only goldsinny of the drift. 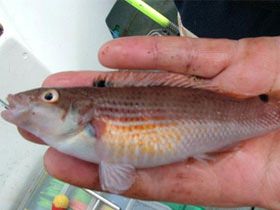 After our drift, we sheltered from the large tide in Church Bay. Here the fishing was consistent, with dogs, whiting and a few huss coming to the baits. Jon was slowly sneaking away with the odd dogfish adding four points apiece to his tally when Gareth P appeared to be struggling with a good bend in his rod. Not only the expected huss but a brace of dogfish broke the surface. Pete Minns was next into action on his SuperSensor rod when his first ever smoothhound, around 8lb engulfed his size 6 hook baited with a small slither of squid.

Simon, having suffered a fairly poor day with us so far, managed to catch the second smoothie of the day. Made more satisfying once again as it was another first ever.

With half hour to go, Pete had dropped back slightly, possibly due to the excitement of catching his smoothhound, however it was honours equal between Jon Law and Gareth P, not a fish scale separating the two of them. A double shot of dogs, followed by a bull huss for Jon saw him edge seven points clear as the final whistle blew.