During the first few days in May and the weather decided it wasn’t best for My Way to set sail, we remained tied up while temperamental winds had their say.

During the first weekend, things settled down over the Spring Tides. Conditions were still breezy but quite good given the conditions, pollack and codling on the drift with doggies, whiting, more codling, huss & others coming to the boat at anchor.

We managed a couple first of the year early May, with a very small tope falling to Stockport angler Lisa, this tope also being her first catch of the species. 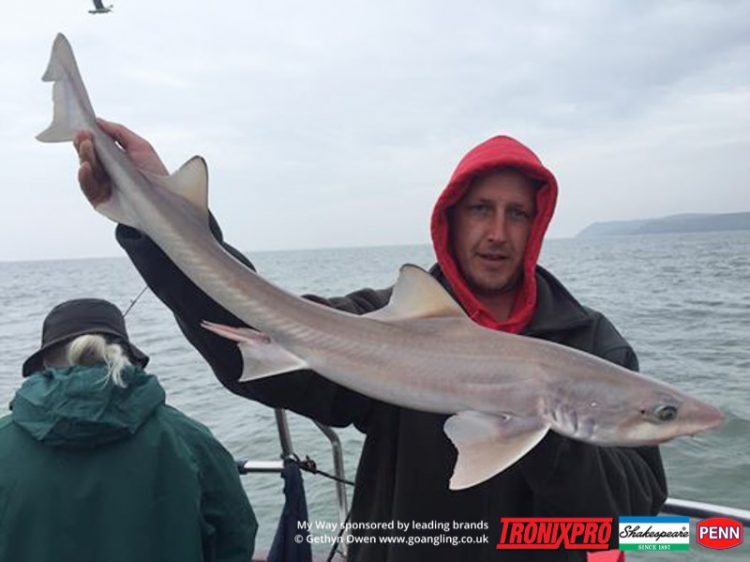 My Way regular Mark Dolben also came up trumps with the first smoothhound of the year. A pair either side of the 10lb mark kick starting what was to be another fantastic season on these hard fighting small sharks.

By the middle of the month, we had some fairly settled weather coinciding with neap tides. This was going to allow My Way to push a little further out than we had been doing and fish a few marks in Holyhead Deep, a popular area with the potential to throw up some fantastic sport.

A regular crowd from The Wirral were not to be disappointed on a recent trip to Holyhead Deep, with Scottish International angler Mickey coming up trumps with a great pair of spurdogs. 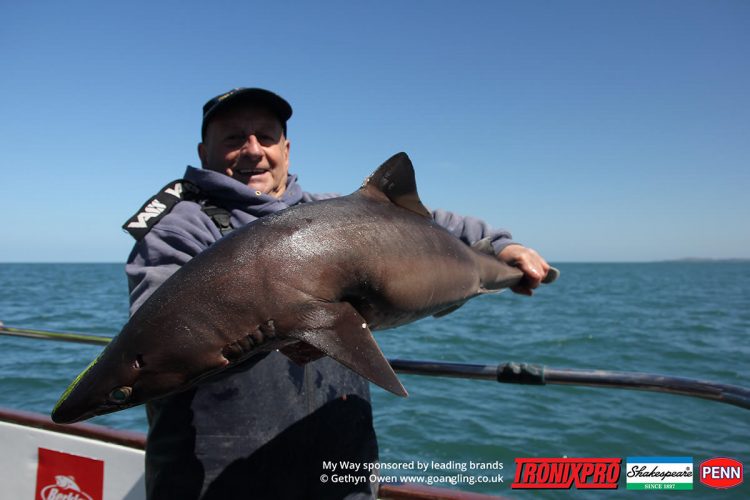 A 16lber on his first drop and a magnificent 20lb specimen towards the end of the Deeps anchor. From 200ft of water in 1.5knots of tide, this really did put up a great fight.

Plenty of species showing up inshore, with small pollack and wrasse making far more regular appearance whilst on the drift around the rock marks and on the back of Holyhead’s famous Breakwater.

The Deeps fishing continued for a few days, with the settled weather remaining over Anglesey and the fishing obliging our anglers. The main target remaining the big huss and big spurdogs, small tope also falling to the baits on the odd occasion.

Middle of May and the weather was turning a little as the neap tides made way for larger and stronger tides. The good movement in the water added more smoothhound fun to our trips as the season slowly got underway. 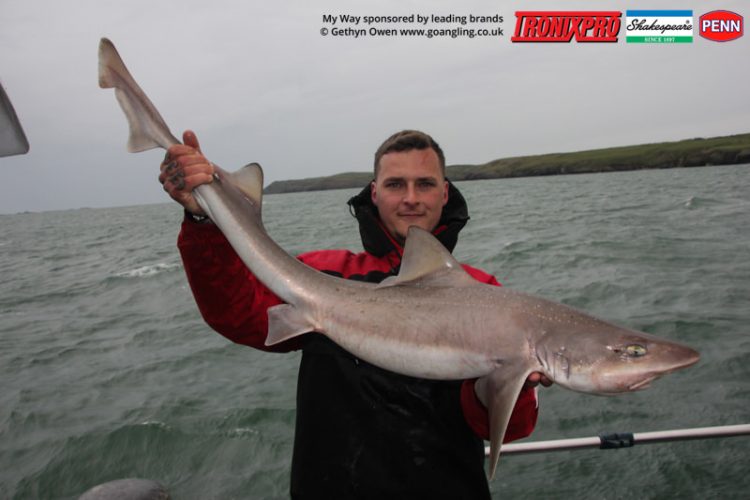 Our spurdog rigs are famed for the ability to continually land big spurdogs, over an over again. Tide in house with only the best products, the rigs also benefit from using wire on the snood lines.

Spurdogs have small rows of razor sharp teeth, that can be seen clearly in the photograph. 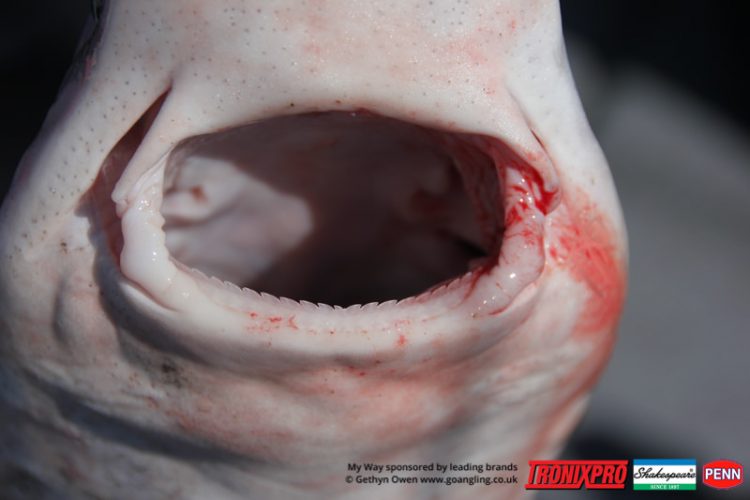 The last full week of May saw the return of My Ways annual hound competition, The Smoothhound Challenge, handsomely sponsored by Tackle Giants TronixPro.

Marking the start to our hounding season, last week saw the return of the annual Smoothhound Challenge aboard GO Angling – My Way Sea Fishing Trips, this year sponsored by tackle innovators Tronixpro.

Conditions were great all week with calm seas greeting all that fished with us. The fishing wasn’t hectic, with packs of smoothies failing to show. Instead a steady stream came to the boat, mainly lone hounds with the odd double or triple hook up through the week

Up for grabs each day during our Smoothhound challenge a Tronix Fishing rod and reel combo, Envoy Multiplier reel and a 3-piece multi-tip, Iridium Berlangas 275 rod. All the angler had to do was catch the heaviest smoothhound of the day. 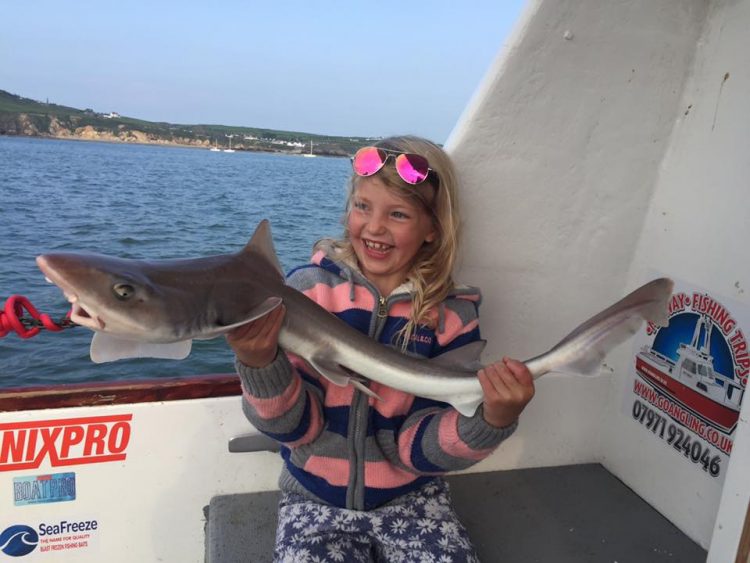 We managed to land over 120 smoothies, many in the 6 to 10lb range, quite small by our own standards, but true to form with the cycle of smoothhound fishing and sizes. However the best during our week was caught by local rod Mark Cain, a whopping 24lb 2oz, just short of the current Welsh Record.

On reflection, May was another good month aboard My Way

Sailing regularly from Holyhead Marina, our reports and numerous photographs help tell the tale of our season and how fishing aboard My Way progresses through one year

June is one of our favourite months to be afloat. There is no secret that tackling smoothhounds inshore on light tackle is a style of fishing that we look forward to each year. So much that as soon as we hang up our smoothhound rigs for any given year, thoughts and ideas on how to improve catches are already floating around. 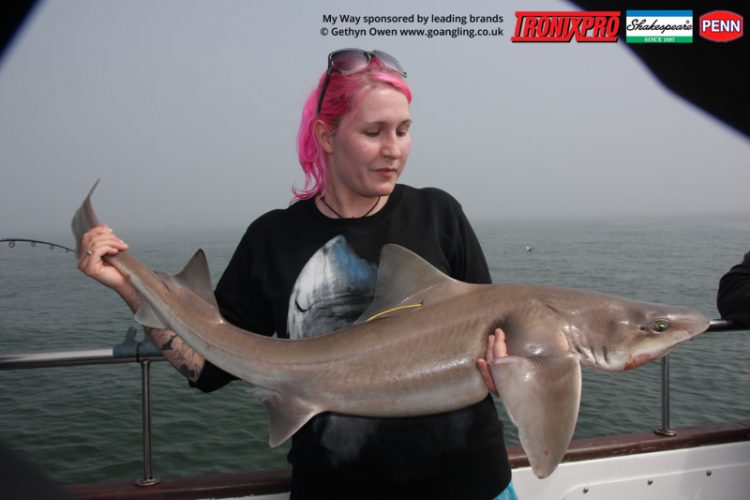 After a great season in 2015, this year June had a lot to live up to, particularly as it is considered by our own theory to be the year were the caches are predominantly smallish fish in the 8 to 10lb bracket.

With the Smoothhound Challenge having just finished another successful week aboard My Way, June was looking to be on the money with the hounds, and it didn’t disappoint with most people bagging hounds and numerous new personal bests being set.

Early June we had a group from up the NE of Wales, looking to enjoy sport aboard My Way with smoothhounds. The hounds obliged with numerous being caught and Wrexham angler Tom Jones setting a new Personal best with a superb specimen of 20lb.

Every fish has its magical weight, double figures always a plus and with smoothhounds a 20lber ensures you join the elite club. Next day after Toms success, we managed another 20lber. 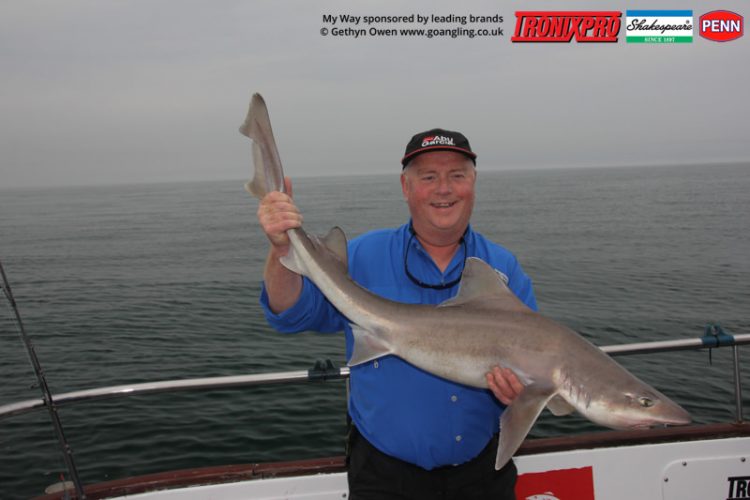 Mikee Thrussell Jnr caught his first 20lber with us last year and then repeated the capture with a 2nd 20lber this year. You can read his account on the website of our Fishing Partner Tronix Fishing.

During smoothie time we run many evening trips, 4 hours in the eve targeting these hard fighting sharks. The photos below showing that girl power often winning

The following four days were filled with a plentiful number of hounds including 20lb plus hounds each day, again some truly fantastic fishing. Early June and we were joined by Paula and Laura from Wobby Shark Savers. Laura was tagging smoothhounds on behalf of the SSCAN. Only tagging hounds over a certain sixe we tagged 39 in a couple days, and both Paula and Laura managed to land themselves 20lbers. 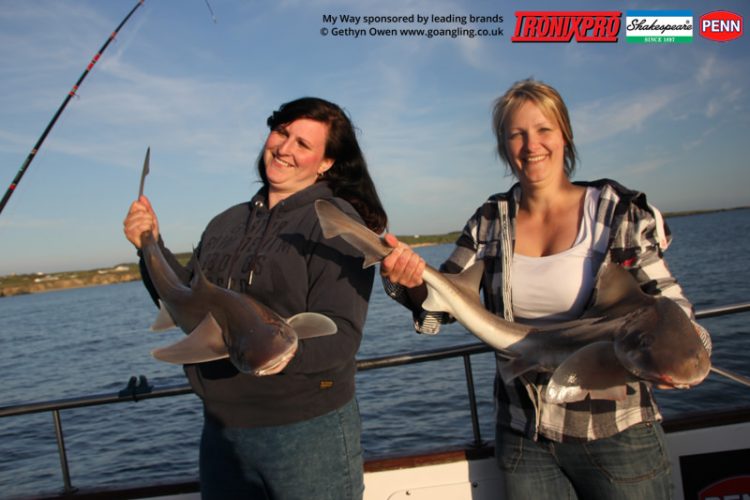 When space allows I like to fish with the crews aboard My Way, smoothhounds a favourite time of year. One day mid-June I caught a small hound, that was sporting a tag. Click this here for the fascinating story & photographs.

Not to be outdone by his son earlier in the month, Mike Thrussell snr, managed to break his own longstanding smoothhound personal best with us this June with a fantastic specimen of 23lb.

With a few missing over recent years this year saw the full complement of Adults With Problems for the 2016 tour. An annual event of merriment consisting of hounding, laughing, and eating drinking and reeling up all manner of unexpected items!

A slight change towards the end of our three days, a small species hunt. With many years angling behind him, Peter “Hamilton Tangler” Hutchison still needed to catch his first ever tompot blenny, he caught two! 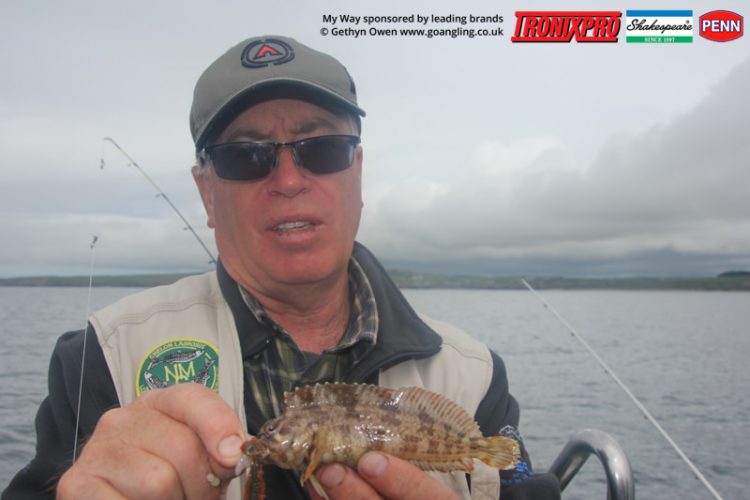 We were on and off the hounds all month, with someday only a few hours on the right state of tide, others the whole days moving and following the feeding patterns learned over the years fishing the bay.

Unlike previous years were June really has been the jewel in the crown of the year’s weather, we lost the majority of the end of the month to the weather. I even had a busman’s holiday booked fishing elsewhere myself, sadly that also fell foul to strong winds.

Cancelling trips is never an easy thing to do, you ponder of the conditions for so long, knowing that you could scupper peoples long awaited trip, but also cancel the potential to earn. It’s a hard call, but one that is taken with safety and enjoyment the main contributing factors for most skippers.

With July promising to be a great month once again, check our spaces here – boat or current individuals