Massive Seismic Survey in the Mediterranean

The noise of the seismic surveys between Cataluña and the Balearic Islands will affect an area almost 5 times as big as both regions. The roar of the “airguns”, with an intensity 100,000 times greater than a jet engine, will be repeated some 10,000 times over 5 months.

Tourism and the vast majority of the fishing grounds will be affected.

More than 17 million marine hectares, 82 protected areas and nearly 200 protected or regulated species are endangered by the seismic oil prospecting projects between Catalonia and the Balearic Islands. This is the summary of the report that Oceana has presented to the government to prevent the oil and gas prospecting work that the company Spectrum hopes to carry out in the waters of the Mediterranean. 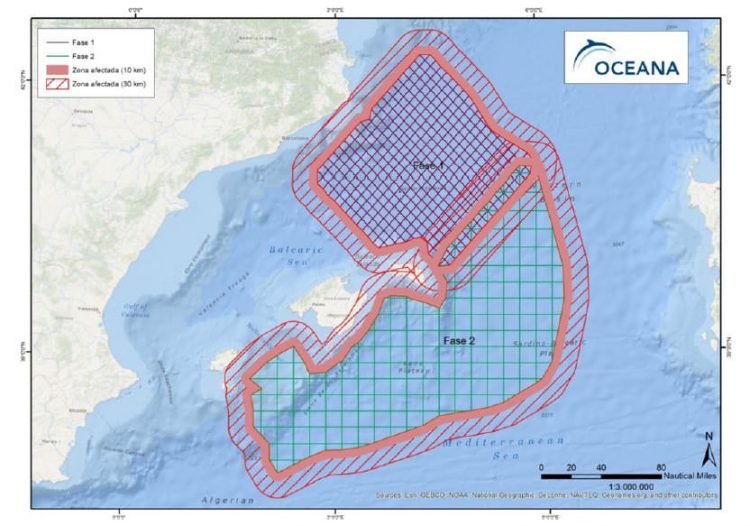 “We ask the government to stop this madness. Not only is it against the law, but it will also affect a huge area with very important and protected ecosystems. It will also harm economies that depend on the resources that will be damaged, like fishing and tourism, given that many species will be driven away by the racket of the seismic surveys,” said Ricardo Aguilar, Director of Research for Oceana in Europe.

Through the use of “airguns”, the company Spectrum wants to scan 10 million marine hectares at depths of between 200 and 3,000 metres, emitting sounds of more than 200 dB every few seconds, 24 hours a day and for 22 weeks. This new project joins the existing threat of the oil company Cairn, which aims to sample 1.3 million marine hectares between the regions of Valencia and the Balearic Islands in the same way.

The Spectrum project would involve a continuous bombardment of sounds 100,000 times more intense than a jet engine and comparable to a nuclear explosion. Cetaceans, sea turtles, fish, molluscs, crustaceans and many other marine organisms would be affected by these seismic surveys.

Similar proposals are generating much controversy in other parts of the world. The U.S. Department of the Interior reported that, if similar studies were carried out in the Atlantic waters belonging to that country, one cetacean would be damaged per 6 km2, and many hundreds of thousands would be affected regarding different aspects of their behaviour, breeding or feeding. If these figures are extrapolated to the Mediterranean, we are talking about 16,000 cetaceans being damaged and many tens of thousands more suffering disruption.

The damage would also affect fishing and tourism, since the impact of sound in the sea extends to areas very distant from the focus of the noise pollution. Even a kilometre away, the sound intensity would be similar to a nuclear explosion like Hiroshima, and effects have been verified at tens or even hundreds of kilometres further away. For this reason, Oceana believes that the affected area would cover more than 17 million marine hectares, when the Hydrocarbons Sector Act establishes that no surveys can be authorised that exceed 100,000 hectares.

Research on the impact of seismic surveys on fishing in the North Atlantic showed that some commercial species were affected even more than 30 kilometres away, causing losses in the catches of fishermen that could be greater than 70%-80%. In other words, the vast majority of the fishing grounds, marine reserves and protected areas in the region would be impacted by the bombardment of the seismic testing.