The latest Bispham Angling match was fished last week and Jordan and Mark Thompson would like to thank all the 37 anglers who participated. Also, a big thank you too Simon Mower for donating the top box for the longest fish prize and to Joe Green and Kevin Fletcher for helping out. 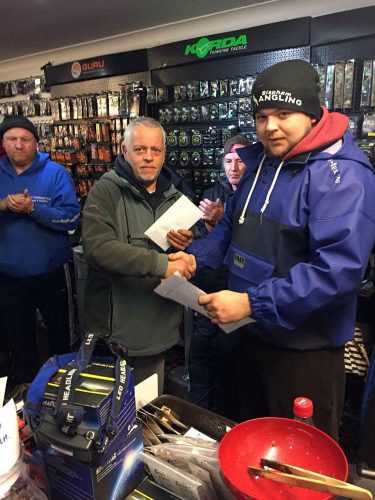 The competitors could not have asked for better weather after the previous week and no weed coupled with plenty of fish helped make the event a success. 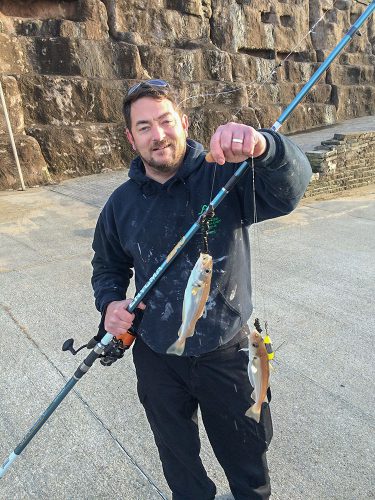 Well done to everyone else, plenty of fish about with species such as whiting, dabs, codling and dogfish. Next match is the Christmas RNLI raffle event on Sunday 18th December.

Second place Paul Goodchild with a double header of whiting.

Winner of the match Tony Baxter

Fleetwood and District Angling Club also fished a match on the crowded Gynn Wall. The wind had dropped off from previous day and swung to northerly, not the best direction for the venue. The Wall fished its normal peggy way with some areas holding fish and others almost devoid of them.

The fish caught were mainly whiting and dabs a few flounders close to the base of the wall and one codling. Most productive baits were worm, crab with mackerel for tipping.

A little reminder that we do not park our cars next to the wall, excuses and sob stories will not wash, you have been warned.

Aaron Wassall fished last Monday and had one bass then about 30 codling with 25’ish keepers and loads of whiting so definitely a good night for him and his mate Harry. Aaron used frozen black and Harry was on Bispham Angling fresh black.

Anthony Ellison fished the Gynn Wall last Tuesday using a two up one down rig and christening his new Penn 525 Mag 2. He had four good sized dogs, three codling from 33cm to 37cm, four whiting and a dab. Everything caught on fresh black from Jordan Russell at Bispham Angling. All fish were safely returned. Anthony even had a visit from the fisheries officer who was handing out leaflets about legal sizes.

Mick Parkin was out last Tuesday at Manor Rd, Fleetwood where he enjoyed a productive session with good whiting, a big doggie and a cod as well as losing a good fish close in.

Dave Brown fished over low water at Cleveleys last Wednesday evening. He targeted a fish holding gulley with water despite the big tides and was straight into a codling well in size but back it went. He then had a decent whiting before going for a little wander to return to a slack line bite which resulted in a big dark dogfish, the ones that people muddle up with huss. As it approached low water the codling came on and he had another five codling while missing four cracking slack line bites. The wind picked up the sea came in like a tsunami and it was time to leave.

Dave followed up on the Thursday when he picked up three small codling before the wind pushed him off the mark and home.

Chris Ashton fished at 5-Bar today and finished on a dozen whiting, lovely day to be out with the sea like a boating lake.

Kevin Fletcher, his dad Brian and Joe Green ventured out last Sunday for a session at the Kings Way Road end of the new prom. It was slow to start off with until about an hour before high water and Joe had a whiting followed quickly by three more. Brian was soon in on the action missing a few bites but saving the blank with a whiting and showing Kev how it’s done. Just after high Joe had a rockling then as they were packing up an hour after high water he landed a small bass.

Bispham Angling have a special offer on this the week, buy £100 of gift vouchers and receive an extra £10 free.