A wet and windy week was experienced by those fishing the Lancashire coast. The RNLI match was cancelled and will be re-scheduled in the new year. A few anglers did brave the weather and they were rewarded with some nice cod and whiting.

Paul Johnson caught his first of the year at the weekend, the fish was caught using black worm and squid.

Blackpool Sea Fishing Federation fished their final match of the league at Dronsfield Road, Fleetwood from 10:30 to 13:30 with high water at 12:56 hours. The match was originally scheduled to be fished at Cleveleys but was moved due to the high wind conditions.

Fishing on the flood was quiet but as high water approached a number of fish were caught and all anglers ended up catching.

The largest fish of the day fell to Ian Hewitt, a 52cm codling and there was also a 43cm Whiting landed by Jim Gross.

The match was won by Ian Hewitt with three fish, his codling, a whiting and a dab for 86 points. Second place went to Jim Gross with three whiting for 54 points and third was Peter Fleetwood with two whiting and three dabs for 36 points. 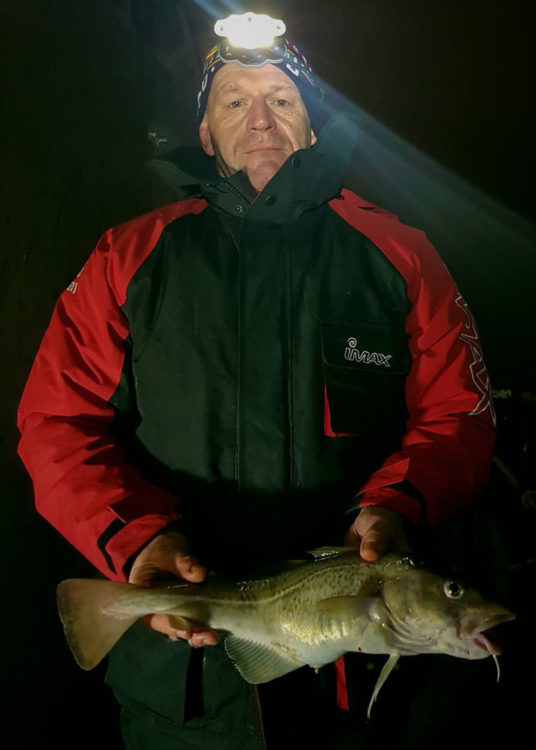 Paul Johnson with his first cod of the year

This means a close finish at the top of the league with Jim and Ian both on 102 points but Jim claiming first place due to the higher total catch points.

The final league standings are:

In addition the prizes for the largest fish in the year went to:

Fleetwood and District Angling Club found a good sea for their Christmas match with a bit of shelter from the wind. The anglers kept dry and weed not as bad as expected, plus some fish. 29 anglers fished and almost everyone caught.

Mostly it was whiting and dabs but also a few codling. Andy Whiteside had the best, a 60cm fish of about four and a half pounds. Worm was top bait and crab also produced.

All the prizes were given out at the Rossall Tavern, where the members could warm to and refresh themselves.

The raffle prize was won by Andrew Adderley and also the £10 voucher kindly donated by Jordan Russell of Bispham Sea Angling. Thanks again to the 11 members and two guests who turned out for the match.

Special offer of the week at Bispham Angling, buy any reel and get free line!