The final Skegness Pier Angling Club (SPAC) match of 2019 was our annual Xmas Fayre match, which was held on Sunday 22nd December from 1 till 5pm at Jacksons Corner. Conditions were absolutely perfect for the match, with a slight lift at the edge of the calm sea, a moderate westerly from behind the anglers and mild with no rain.

As usual, the match HQ was the Lookout Pub, by kind permission of my ex-Skegness Lifeboat colleague, Tony Kelly. Booking in started from 11am in the pub, with most of the “usual suspects” arriving, including the top class Grimsby contingent, along with welcome newcomers Dave & Sue Hollingsworth, also from Grimsby. I had been anticipating around twenty anglers, but ended up with 23 booked in, which I’m very pleased to say is our best match attendance of 2019 and the same number as fished the match last year.

After booking everyone in, it was home time to load the Astra to the brim with prizes, along with Christmas cake and mince pies made by my dear wife Sue, before going back to the Lookout to offload everything. Back at the pub, Sue helped me to set out the food, along with all the prizes for both raffle and match, as everyone who fishes our Xmas Fayre match receives a prize, even if they blank! Then there was just time for a quick pint, before getting myself prepared for the influx of fish cards. 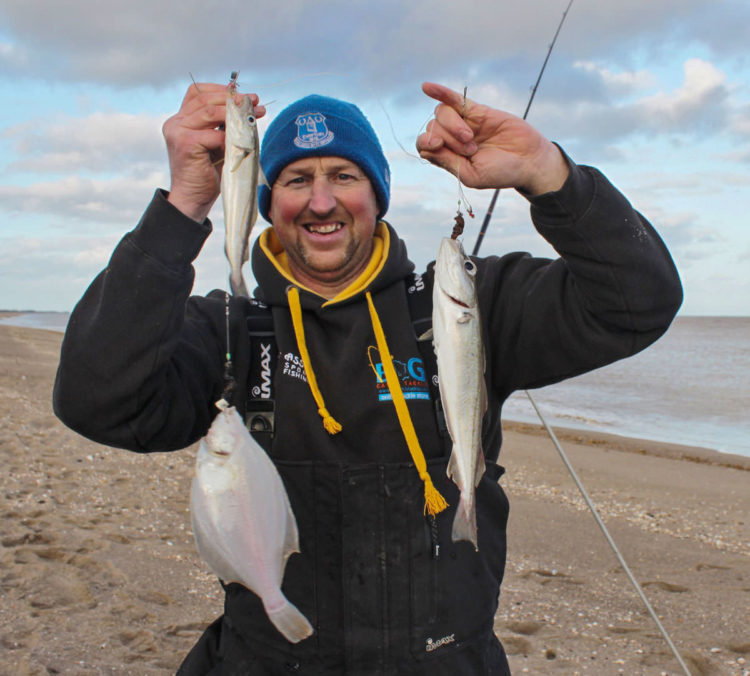 5pm soon came round and a steady trickle of anglers began arriving to hand in their smelly match cards. It was obvious from the very first cards that the fishing had again been good, with loads of whiting recorded, interspersed with dabs, along with a few flounders, rockling, codlets and a couple of LSD. Last years runner up, “hound magnet” Adie Cooper, appeared to be the man to beat, as one side of his card was full and four whiting had to be marked on the back. Then Grimsby ace Garry Hutson also turned up with a full card with seven whiting marked on the back and it was game on! 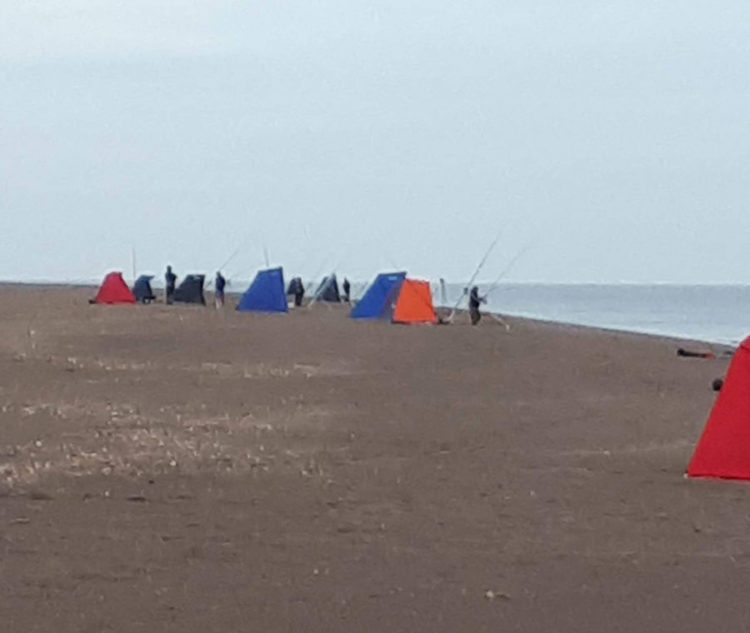 Nice conditions on the beach at Jacksons

Cards were now coming in thick and fast, so it was a case of ignoring the hubbub going on around me, checking and rechecking the match cards, then working hard to come up with the final result. By 6pm, with the help of Steve Herrick, I was satisfied that my calculations were correct and it turned out that Adie was indeed the winner with 34 fish measuring 1020cm in total, making this his fourth SPAC match win on the trot. He also won the longest flatfish prize with a 30cm dab. Although Garry caught more fish than Adie, they were of slightly smaller average size and he finished agonisingly close behind in second place, with 37 fish for 1015cm (one small stickleback behind!!). 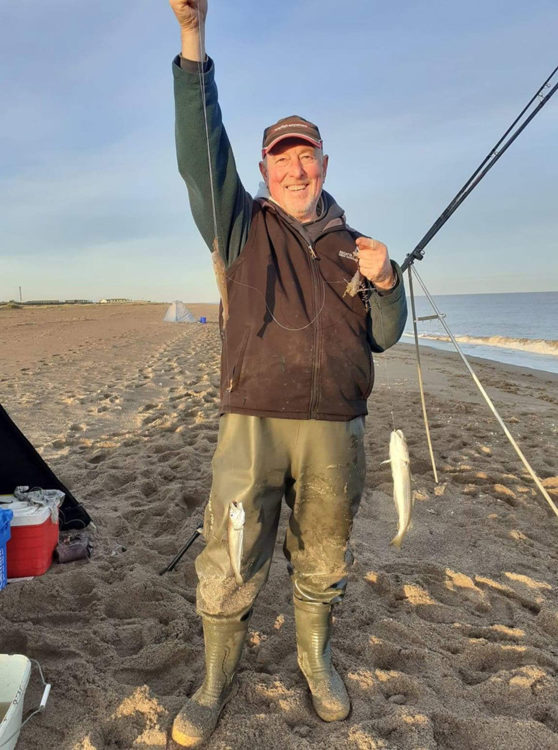 Second placed Garry Hutson with yet another treble shot

Top class Stafford based match-man Dave Shorthouse came in third with a 29 fish mixed bag measuring 829cm and ever present Karl Nangle took fourth place with 28 fish for 809cm. Kev Warner only managed to catch one fish over 30cm, but his 25 fish catch measuring 604cm was good enough for fifth place, the same position that he finished in last year. Big fish specialist Josh Collier was the recipient of the longest round fish prize yet again with his 62cm lesser spotted dogfish, which beat a bunch of pound plus whiting to the prize. In total, there were 423 fish caught by the 23 anglers (61 more than last year), consisting of 343 whiting, 45 dabs, 20 rockling, six flounders, seven codlets and a couple of lesser spotted dogfish. A great result by any standards! 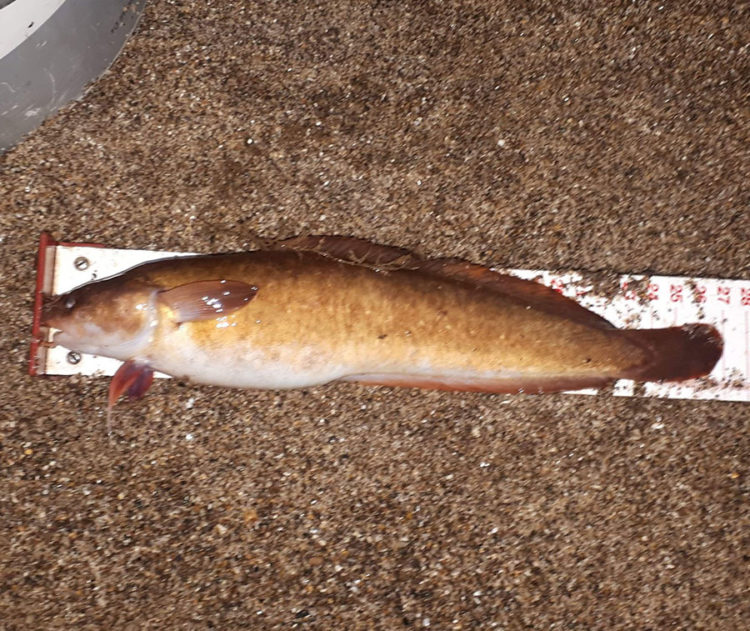 One of the many fat slugs that were caught

A great match, thanks to everyone that turned out to fish, also to those who donated raffle prizes and I hope you all enjoyed yourselves! Also, a big “thank you” to Sharon and Nigel of The Lookout for looking after us so well and keeping the pub open for us. Massive thanks to Steve Herrick of Lakeside Leisure and Big Catch Tackle for his ongoing support, to Jacqui & Russ Taylor for once again providing the sausages etc out of their own pockets and especially to my dear wife (and master chef) Sue, without whose help I could not manage it all. 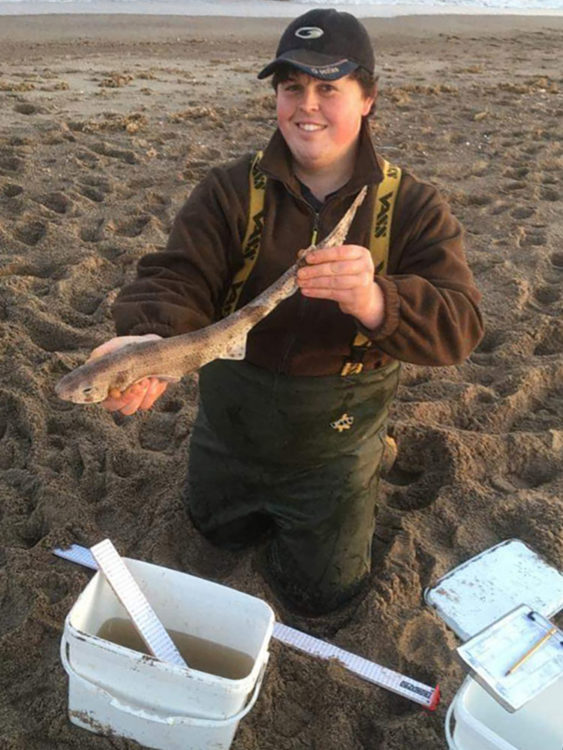 Big fish expert Josh Collier with the longest round fish

So another great year for SPAC and I am extremely grateful to everyone that has come along to support our Club. The first SPAC match of the New Year will be held on Saturday 11th January from 4:30 till 8:30pm at Trunch Lane, with Club members fishing for the C Smith Cup. The match is open to all, so why not come along and have a fish with our friendly little Club. The SPAC AGM will be on Saturday 7 March next year, so please make a note in your diaries. Please pass on to those not on Facebook and please contact SPAC Secretary Chas Tibble on 07984 967988 or chastibble@hotmail.com for further details.

Finally I would like to wish everyone out there a very Happy Christmas and every success in the New Year. Best Wishes – Chas Tibble – SPAC Secretary

How To Tie A Redi Rig Release Float Rig For Tope