The fishing has been amazing this week on the Lancashire coast. Lots of species and good numbers of fish, the whole coast line has fished well at high and low water, day or night.

Wayne Marshall was out on the beach at 4:15 am to catch low water with Stephen Roe. Using their usual bait of fresh blow lug and yellow tails the pair had plaice, dabs, Dover sole, two bass a dogfish and loads of whiting. Nothing big enough to keep apart from the bass, but a great mornings fishing.

Dave Brown enjoyed an after work session and with a good strong westerly and decent tide he tried on the front. There were some huge rollers coming in and a few chunks of weed but it was very fishable. Dave ended up with five cod to 2½lb. 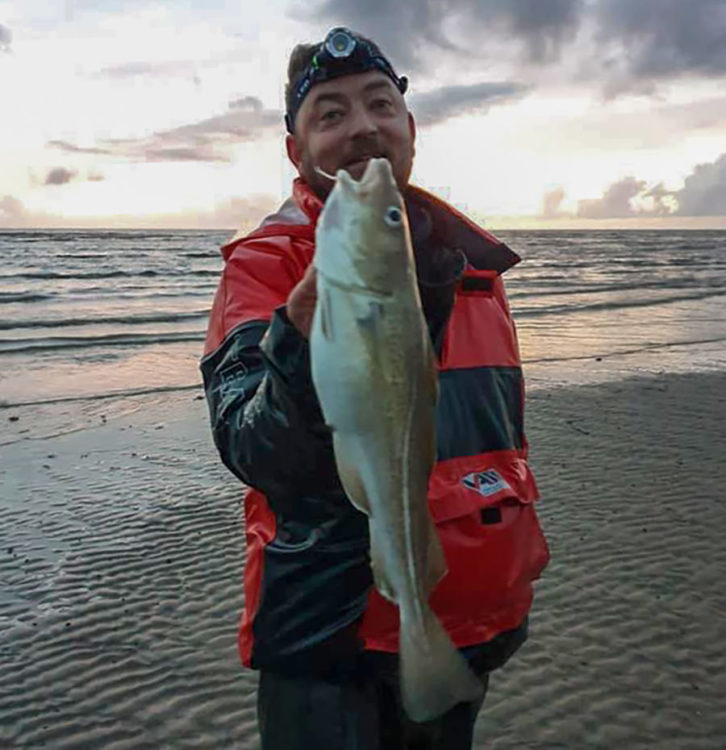 Blackpool Federation Sea Angling fished there ninth League match at Cleveleys. They fished down over the tide from 10:00 to 13:00 with high water at 11:43.

Fish were caught throughout the tide with catches mainly made up of whiting and dogfish but several thornback rays were also caught mainly on sandeel.

Carl Lawton was out with Simon Calligan fishing low water at Rossall. They fished one hour down and 1½hrs up landing whiting, dogfish and a nice thornback. All fish were taken on black lug and mackerel wraps. 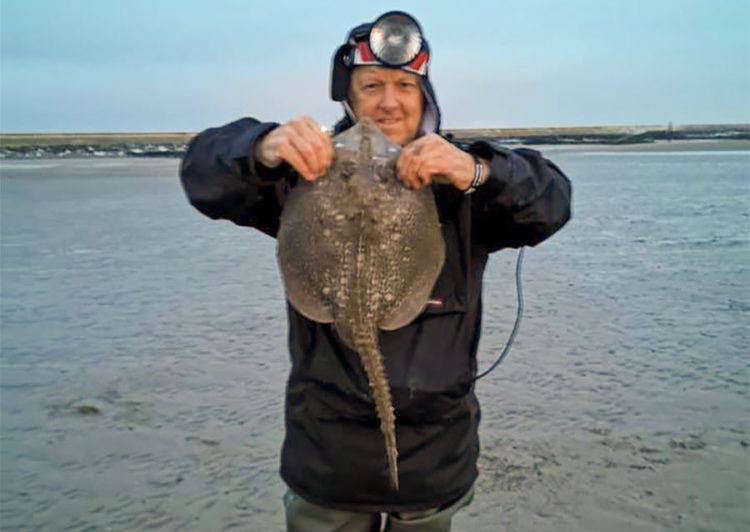 Carl Lawton with a ray

Fleetwood and District Angling Club latest match was held at Five-Bar Gate. The twenty-four competitors who turned out for the match had to contend with flat sea and heavy rain. The rain was not quite as bad as forecast.

With the sea flattening off after the recent westerly winds, it encouraged a few fish to come in. The vast majority of these fish were whiting along with a couple of dogs and dabs.

There was also ten thornback ray caught by the members, Hughie Porter and Ken Forrest both having fish over six pound.

As expected worm tipped with fish was the top bait for the whiting. The thornbacks took sandeel and squid wraps, bluey or mackerel.

Next Sunday’s match is at Beach Road, Fleetwood, prizes are for the fish worth the most points.

Leyland and District Sea Angling Club fished their latest match at the “Town Hall Steps” on the Mersey.

The members had quite a few species today with a number of plaice showing up too.

The raffle was won by Nigel Thompson and the Golden Peg card was won by Stuart Pilkington. Luckily the weather stayed mostly dry and it was a decent day out for the 13 members who fished.