The last few weeks have been all about the gales that have been buffeting our coastline. First we had Storm Ciara and a week later it was Storm Dennis, both of which stopped any boats from launching. This weekend saw another storm hit us, for some reason it was a “no name” blow that also completely stopped the boat fisherman from putting to sea!

Along with all of this we saw a couple of particularly high tides and a storm surge that caused flooding particularly around the Brightlingsea area. Storm surges are caused by the highest high tides of the month, in our area anything around a 4.5 metre tide coinciding with a strong North-Westerly wind and then add the gravitational pull of a full moon. It does take a lot for this to happen, but when it does then a tidal surge is pushed down the whole of the East Coast and any low-lying coastal areas could potentially be flooded. Thankfully this is a rare occurrence and our sea defences have so far been up to the job!

This week has seen a lot more of those thornback rays being caught, Walton Pier has seen rays to double figures being landed along with most of the Walton and Frinton beaches, Mark Oxley landed rays to 7lbs fishing an evening tide on the Frinton beaches. 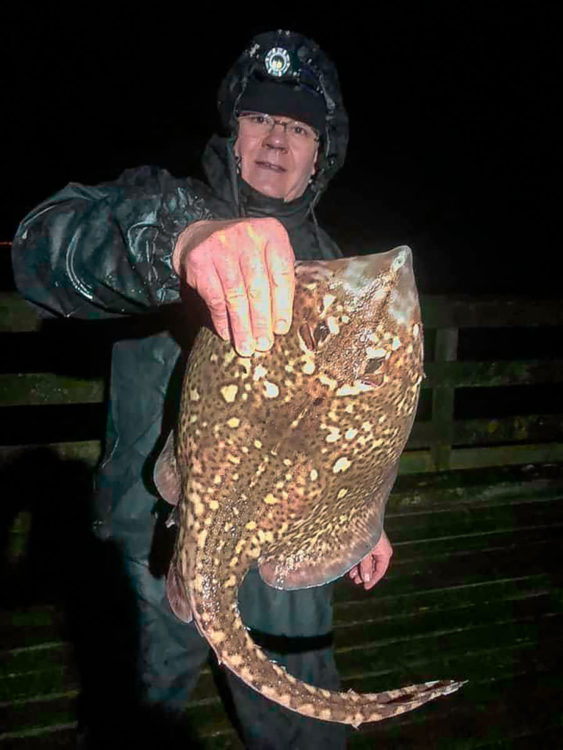 The Clacton and Holland beaches have also seen rays being caught from all areas, the best baits will be squid or blueys.

The small first year Spring codling seem to be showing quite well. These fish are only 7-8 inches long, but it is a sign that cod are breeding somewhere in the Thames Estuary, so hopefully over the next couple of years we might see a return to some decent cod fishing for our boat and beach fishermen.

Clacton Pier has been closed to fishermen for the last couple of weeks because of renovations, but it will be open again by the weekend.

The high tides for the weekend are Saturday 3.03pm and Sunday 3.55pm.