The fourth Skegness Pier Angling Club (SPAC) match of 2020 was held on Saturday 22nd February from 3:30 till 7:30pm at North Shore Road. Unfortunately the turnout was reduced down to 13, due most probably to the relatively poor forecast. But once again the weather gods smiled upon us and we were met with a calm sea, with the rock armour sheltering the anglers from the worst of a strong westerly, blowing from directly behind the match stretch.

The turnout saw the usual contingent of top class Grimsby anglers, along with the welcome addition of Hull match anglers Lee Smith and Jimmy Tennyson, who had made the long trip from the other side of the Humber to fish with SPAC for the very first time. Another new face also turned up to fish, with Shane Stedman making the shorter journey from Horncastle to fish his first ever sea match.

In years gone by the fishing from local shores used to slow down after Christmas every year, with February and March always being the doldrums months as the winter species thinned out. But things have been changing more recently, with late winter and early spring catches getting better every year. Also, some species like rays and lesser spotted dogfish (LSD) are now being caught all year round. So everyone was hoping for another good match, despite the large clumps of weed all along the high tide mark. 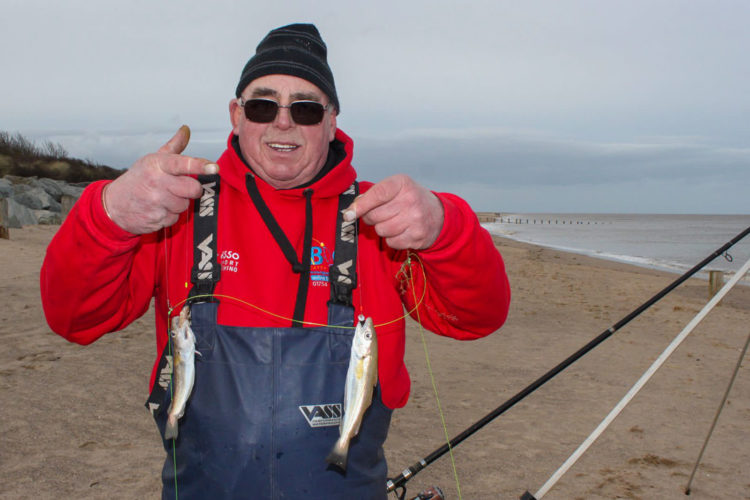 From the off, it soon became apparent that there was weed close in, but as long as a decent cast was made and line held above the slight surf, it wasn’t going to prove a problem. Lee Smith got off to the perfect start in front of the North Shore beach access, with his first prodigious cast resulting in a whiting and dab treble shot. Fishing between Lee and the first wooden groyne, Croxton’s Dave Burr also got off to a good start with a whiting double, which he then followed up with a 52cm LSD. Further along the beach to the south towards Sea View Road, Tom Marshall’s first fish was a 54cm LSD, then Ian Nelson in the centre of the match stretch went one better, with a lively LSD which hit the measure at 59cm.

Although fish came out at all distances in the last SPAC match held in the deeper water at Winthorpe, the shallower North Shore beach better suited the distance casters on this occasion and there was not a great deal at close range for the shorter casters. Then word came down the beach that Tom Marshall had caught a couple of small thornback rays on consecutive casts. Grimsby ace Garry Hutson was unusually struggling to find the fish but “hound magnet” Adie Cooper managed to find some 30cm plus whiting at peak distance, then pulled in a decent 61cm LSD. But by mid-match it was still Lee in the driving seat, although Dave Burr was pushing him very close. 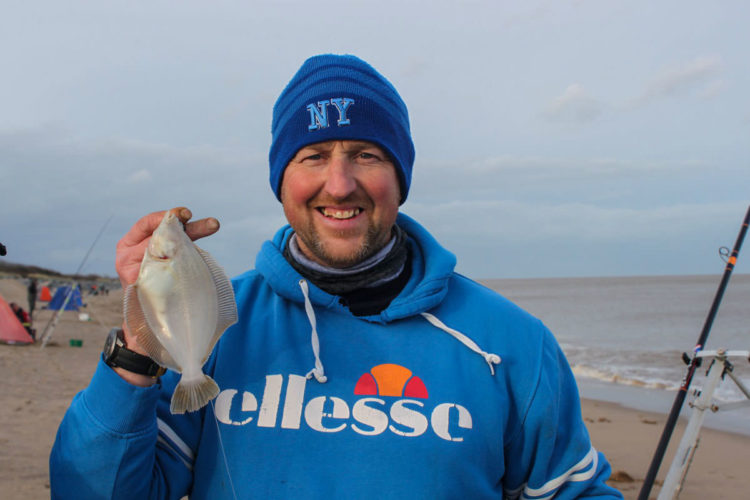 After a bite-less spell for most over slack water, a bit of tide run on the ebb brought the fish on again, with Lee and Dave pulling in a small thornback apiece on the same casts. But from that moment on it all fell apart for Lee, as he failed to catch another fish; whilst Dave Burr added another five to his tally, to run out easy winner of the Gordon Long Cup, with 21 fish measuring 567cm in total. Adie Cooper caught a 33cm & 29cm whiting double on his penultimate cast to snatch second place with 16 fish for 444cm. He also won the longest round fish prize with his 61cm LSD. Just one small fish behind Adie in third place came Lee Smith, ending up with a 15 fish mixed bag for 431cm. Tony Burman and Garry Hutson shared the longest flatfish prize, both with 30cm dabs.

Well done to Jimmy Tennyson for specifically targeting rays late on and catching the best of the match measuring 57cm. Also to Shane Stedman, who managed to avoid the dreaded blank and catch three codlets in his first ever match. 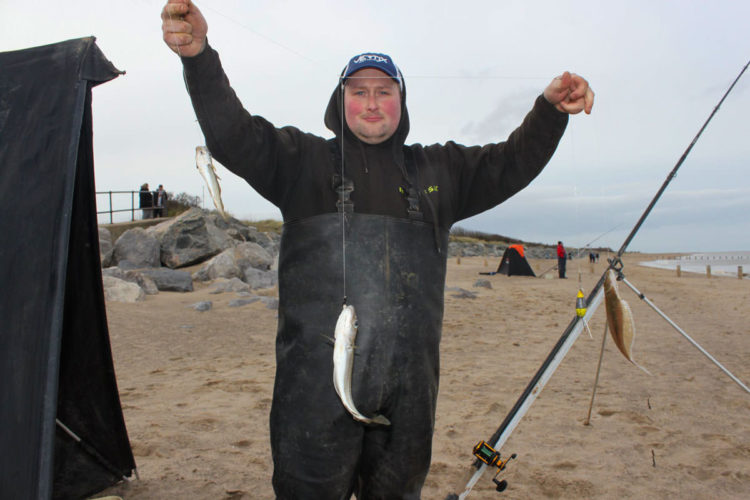 So although there were not so many fish caught this time, the upside was less competition for food out there from hordes of voracious whiting, allowing the slower moving rays and LSD to get on the baits. Once again the match fished far better than last year’s equivalent, with 131 fish caught by the 13 anglers, consisting of 75 whiting, 37 dabs, eight codlets, six thornback ray and five lesser spotted dogfish. Surprisingly there was not one flounder caught, neither any rockling, which after a sudden influx this year, have deserted us again.

The next SPAC match will be held on Sunday 8th March from 3 till 7pm at Marsh Yard (Moggs Eye) PE24 5YQ. The match is open to all and Club members will be fishing for the Ex -Service Cup. Hard copies of the match rules will be available on the day for those who have not fished with SPAC before. 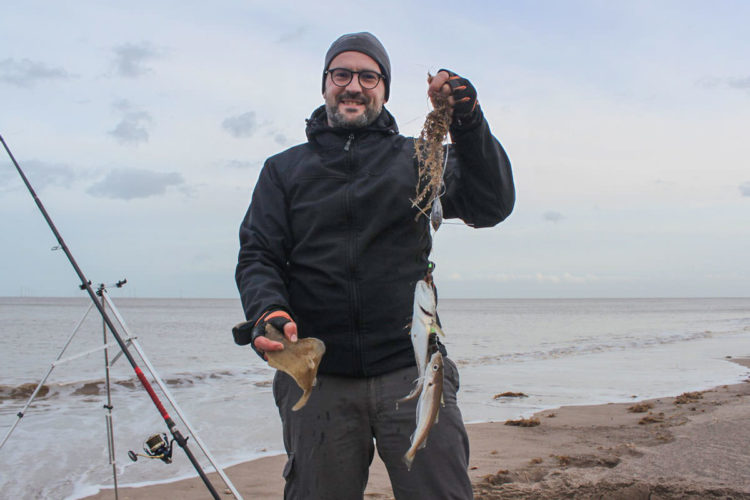 Fourth placed Tom Marshal had a good bend in his rod with this whiting, dab and weed quadruple shot!!

The SPAC AGM and trophy presentation will be held the day before the match on Saturday 7 March, from 7pm at the New Park Club, Scarborough Avenue, PE25 2TQ, so please make a note in your diaries. All are welcome, there will be a free buffet and a raffle with lots of prizes. Please pass on to those not on Facebook and please contact SPAC Secretary Chas Tibble on 07984 967988 or chastibble@hotmail.com for further details.