It may be only February, and we have slipped into a very cold snap, thornback ray are generally associated with Spring, but over the last few years rays have increased in numbers all over the coast. This has, in part, been due to the cut in commercial fishing quotas.

The weekend saw light winds and calm seas so plenty of charter and private fishing boats took to the water hoping for some decent catches, and they were not disappointed.

Thornback ray have moved in quite close to the shore and boat and beach anglers caught fish.

Gunfleet Boating Club members had a good day with codling and rays. Howard Mason landed codling to 4lbs and also caught some good size whiting, Shaun Wright returned with 6 decent codling plus skate and whiting and Dave Holland and Rocky Rotchell caught codling to 4lbs and some rays. Dave also told me that those herring and sprats seemed to have dispersed somewhat.

Martin Smyth fished from his own boat “Nick a Bit” and landed 13 rays and a few codling. The Mersea boats have also reported an increase in thornback rays and codling plus the odd small bass.

The pier and beach angler has also faired much better this week. St Osyth beach has seen a few thornback rays this week, plus still plenty of whiting. Clacton Pier has also seen a return of a few rays, the odd codling and whiting.

Along the Holland on Sea beaches the big tides have also seen the fish moving in closer, some codling and now the odd thornback ray to be caught too. For those venturing onto the Frinton beaches you can expect whiting, codling and flounders, although codling are still at a premium here.

Walton Pier has also seen a return of the thornback rays from the top of the pier, still plenty of dabs and small whiting to be caught here. There is always a chance of some good size codling too.

Colchester Sea Angling club headed for Felixstowe for their weather postponed River Championships alongside their annual Dab Challenge. 17 hardy anglers started the match in cold and snowy conditions, but as the match progressed the sun made an appearance. They fished a flood tide and everyone caught fish, mainly whiting, dabs and rockling. 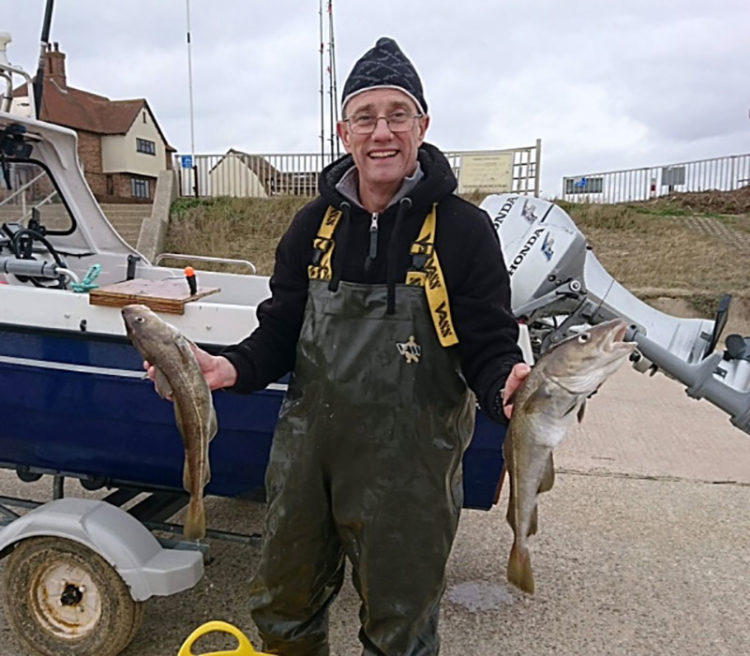 Howard Mason a Gunfleet Boating Club member with part of his catch of codling.

First and new River Champion was Chris Mills with 4lb 10oz, second place place went to Mark Sessions with a bag of 3lb 14oz and third placed Grant Tappenden had 3lb 9oz. The heaviest round fish prize was tied between Mark sessions and Chris Mills with a 7oz whiting.

All in all a pretty good fishing week on the East coast, lets hope we are now on the up and spring is just around the corner.

Dene Comes Out On Top At Kelling