The Covid 19 postponed 2020 EFSA Shore Angling Championships were re-arranged for the competition to run from September 29th to October 2nd, 2021. The HQ venue was The Upton Court Hotel in Kilmuckridge, Co. Wexford where the parade of national flags & opening ceremony took place on the evening of Wednesday September 29th. This was followed by the zone draw where competitors were allocated their daily beach sections. Competing Nations were: England, Germany, Iceland, Netherlands, Wales & hosts, Ireland.

The 59 competitors from the six nations assembled on Thursday morning for bait distribution at 10.30AM with a planned fishing session on Morriscastle Beach from 2pm to 7pm. The supplied baits were mackerel, sand-eel, black lug wraps, king rag & harbour rag (maddies). High winds & a driving surf however forced a 1 hour delay reducing the allocated fishing time to 4 hours.

The anglers assembled at their zones to draw their zone position & the match got underway at 3pm.

Best round fish was a superb 50cm Bass for John Hughes (IRE) & best flat fish was a 33cm Flounder for Don Scott (IRE).

Day winner Stephen Glynn set about defending his title won in Iceland in 2019 with the best score on the day, 246 points. 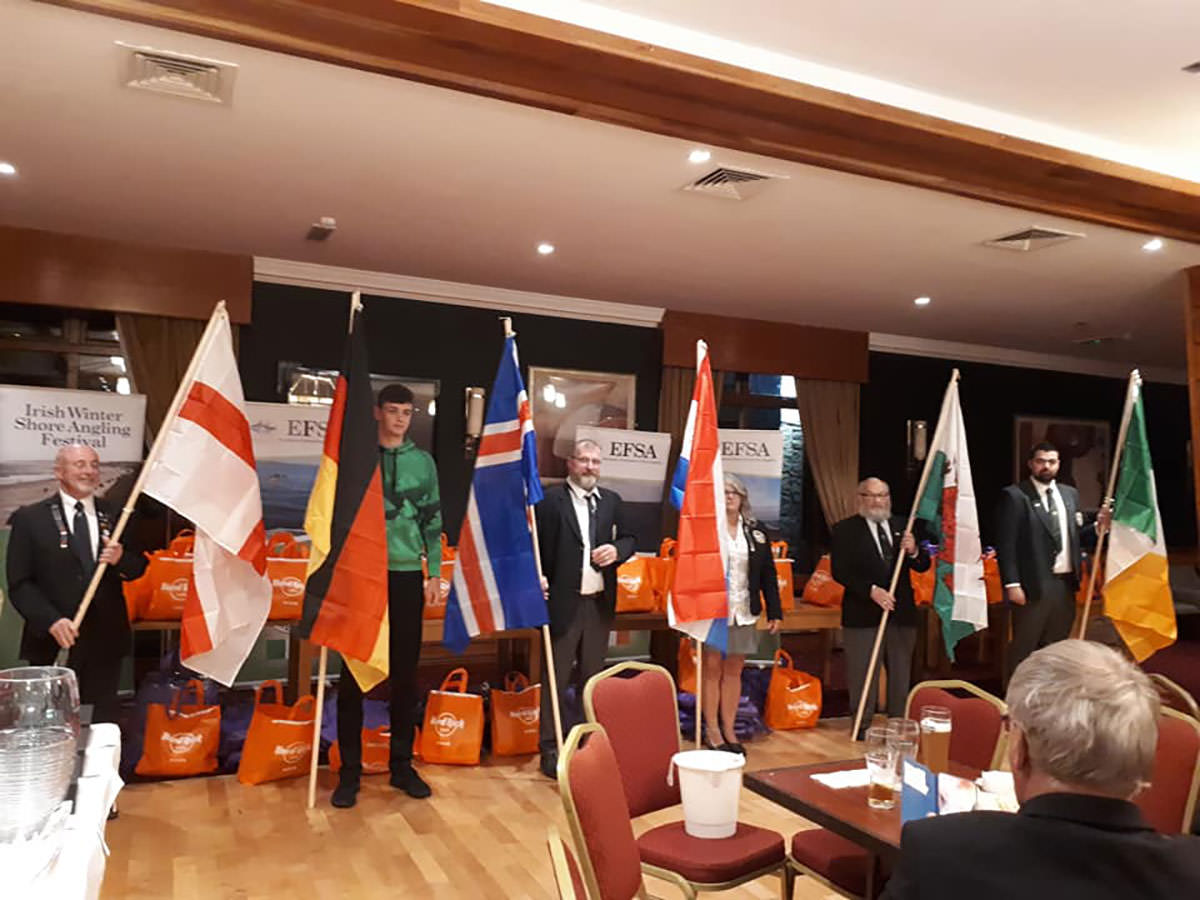 The venue for day 2 was Clone Strand (Kilgorman) where fishing got underway at 2pm for a 5 hours session. Fishing was again very slow with some sections having no fish early on. When lines in was called the zone winners were: Stephen Glynn defending his title in style with another day win, Wilco Keur also recorded his second win, Paul Whelan (IRE), Volker Claus (GER) & Helgi Bergsson (ICE) were the other zone winners.

Best round fish, a 97cm Smoothhound was captured by Hans Juergen Glaeser (GER).

Day 3 had the anglers at Curracloe Beach for an 11am start for their 5 hour session. Torrential rain marred the first 2 hours however the fishing was better than the previous two days with many anglers recording fish on their first cast. The all day rising tide gave a big improvement in the capture rate with 330 fish recorded for the session. Reports along the beach were that Paul Whelan was fairly rocking the fish in and so it proved when he took the day win with 31 fish for 830 points. The other zone winners were: Andreas Burkhardt (GER), Helgi Bergsson, Mike Flynn (WAL) and J. P. Molloy (IRE).

The Gala Dinner & Prize presentation took place at The Upton Court Hotel at 8pm. The anglers, wives, partners & guests enjoyed a wonderful meal prior to the awarding of prizes.

EFSA Ireland Chairman George McCullough opened the proceedings. He thanked those who had worked to make the event the success that it was. He also thanked the staff who had very professionally & efficiently served the meal.

He made special mention to those who had supported the EFSA Ireland organising committee with running the event: Troponin Fishing Tackle, Inland Fisheries Ireland, Wexford County Council, Swords Angling, Southside Angling, Waterford Outdoor & Angling Centre, Waterford Glass, Adlantic Sales, without whose support the event would have been impossible to host. 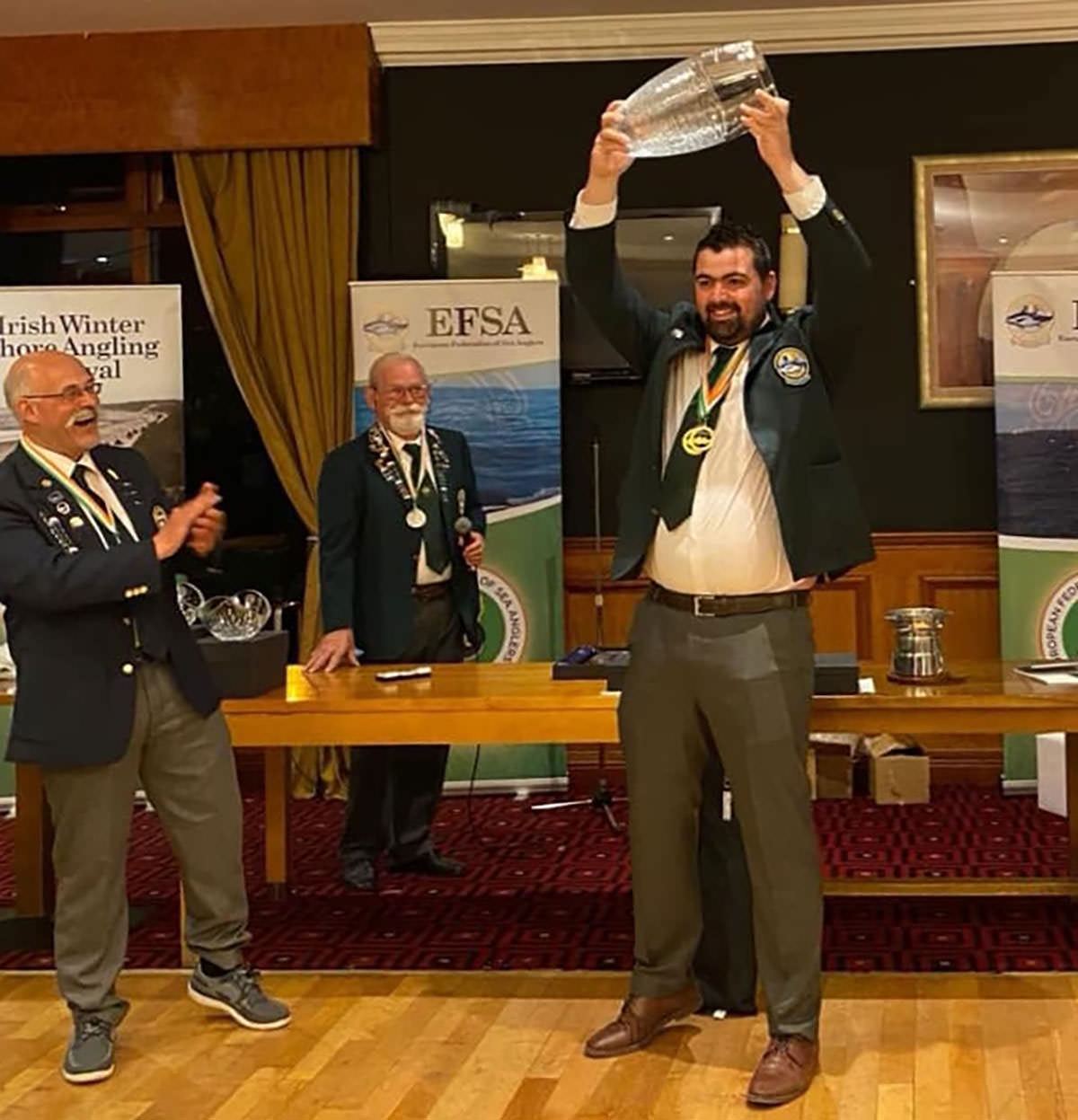 The award winners in the various categories were:

The Committee of EFSA Ireland wish to thank everyone who travelled from far & near, in these trying times, to make the event such a success. We hope to see you in Ireland again in the near future.