Skegness Pier Angling Club (SPAC) Match 10 was held last Saturday 24th Oct from North Shore Road. Yours truly did the booking in and peg draw, whilst Adie Cooper kindly put the pegs out. Originally there were 14 pre-booked in, but with one crying off due to illness, 13 Club members went off to their drawn pegs to do battle for the Frank Parkins Shield.

The match was again run with Covid 19 precautionary measures put in place, as recommended by the Angling Trust and risk assessed by the organiser in accordance with their guidelines. Once again the pay-out was carried out at the end of the match with “safe” Club money and the entry fees paid on the day quarantined until presumed safe and virus free.

The last two SPAC matches have been fished in strong winds and rough seas, which adversely affected catches. Unfortunately once again the wind was strong and the sea was rough; but this time the wind was from the south, which resulted in less lateral tide run, so I anticipated that there would be more fish caught. 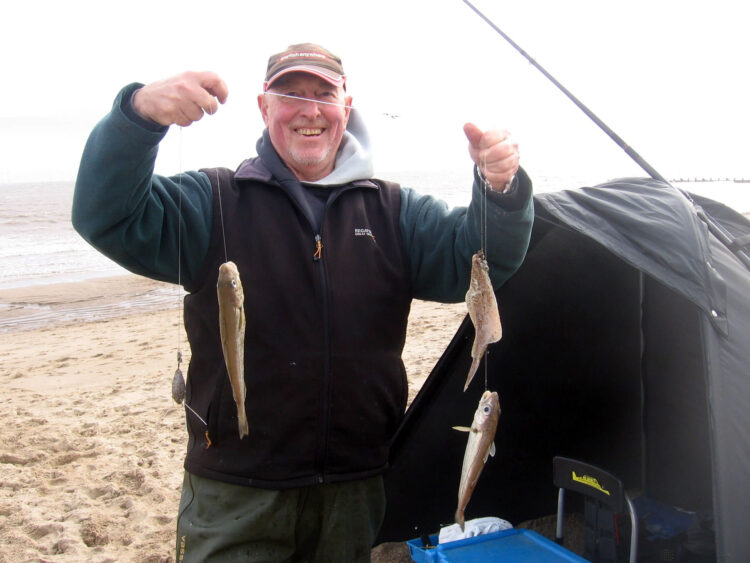 The strong wind was holding the tide back and initially the fishing was very slow. But when the waves reached the bottom of the slope, the longer casters started to get into their stride, with Grimsby ace Karl Nangle pulling in a triple shot of whiting, then “hound magnet” Adie Cooper fishing next to him pulling in a double shot. Another top class Grimsby angler Garry Hutson, was looking for his third match win on the trot and was also quickly out of the blocks, pulling in a dab and whiting treble. 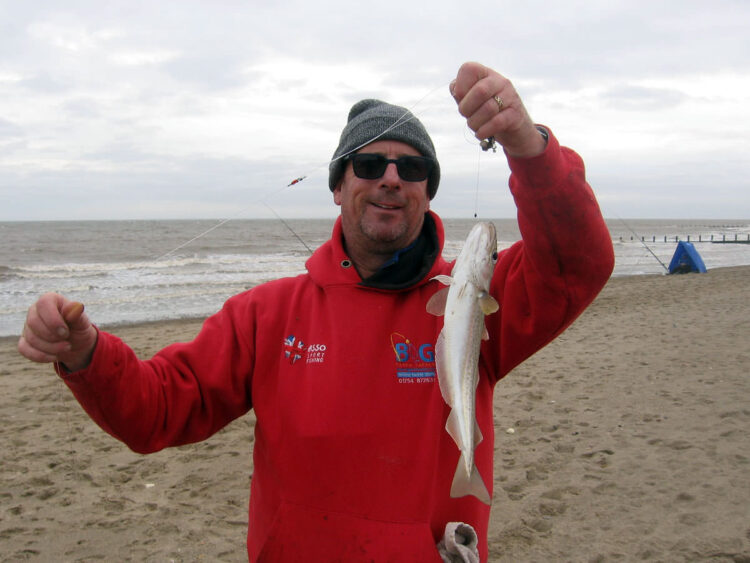 A smattering of whiting and dabs was coming out all along the match stretch, with most having at least one fish on their match card by the halfway stage to avoid the dreaded blank! Kieran Brown had drawn end peg 13 and made the most of casting towards the groyne to catch two flounders, with the best hitting the measure at 33cm. John Spalton also beached a nice flounder, but at 32cm it wasn’t quite enough to dislodge Kieran from the lead for the longest flatfish prize. Further along to the north, Rick Jarvis was struggling to catch anything; but was then relieved to pull in a decent 52cm silver eel, which weighed 1lb exactly on his digital scales. 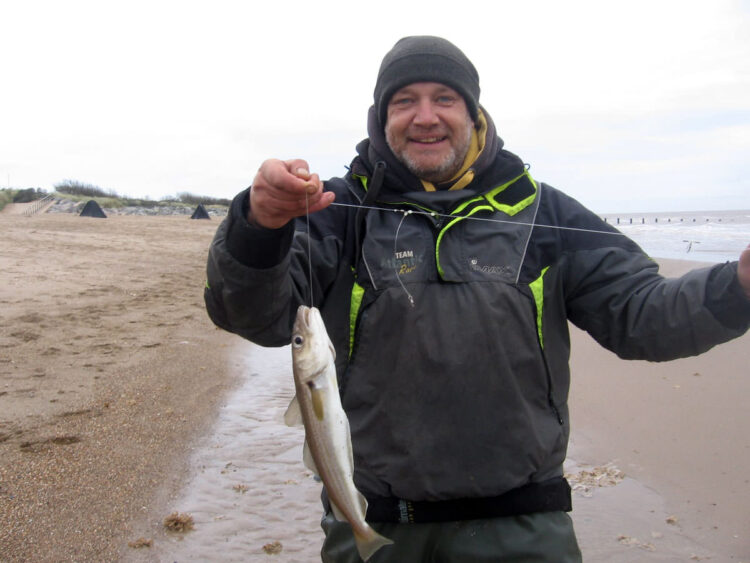 As the match progressed, the balance of power changed, with both Karl and Adie struggling to catch after their initial flurry. But Paul Denholm on peg 1 continued to catch steadily throughout the match and it looked as though it was going to be a two horse race between Paul and Garry. Although Ian Nelson was also looking to having a say in the result, catching whiting and dabs at distance, with a couple of 37cm whiting included in his catch. 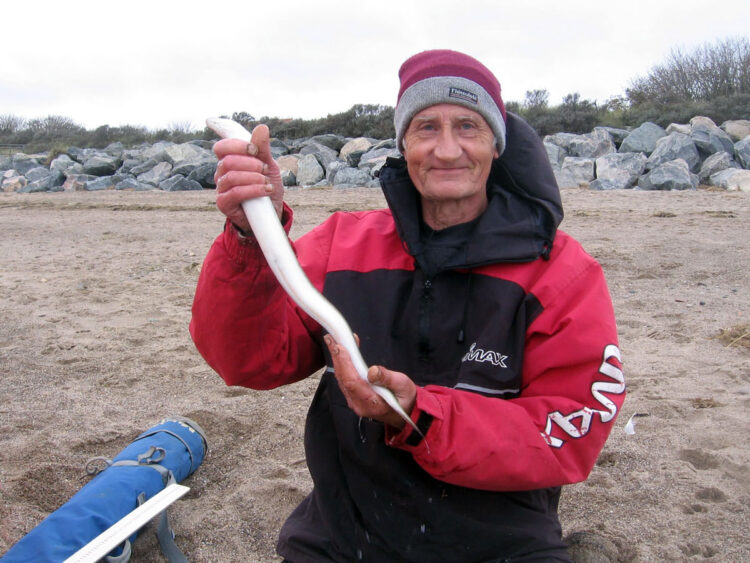 Rick Jarvis with the longest round fish

But in the end there was no denying superstar Garry Hutson from achieving his hat-trick of wins, as he finished the match strongly to end up with 19 fish for a total length of 509cm. Despite his best efforts, Paul Denholm had to settle for second place, also with 19 fish, but for 470cm. Over a metre behind in third place came Ian Nelson, with 12 fish for 324cm. Rick Jarvis only manged to catch the one fish, but his 52cm silver eel was more than enough to win him the longest round fish prize. The eel is also now the front runner for the season’s silver eel trophy. Well done to Kieran Brown for his persistence in the difficult conditions, which resulted in him winning the longest flatfish prize with his 33cm flounder. Overall there were 64 whiting, 32 dabs, 4 flounders and the solitary silver eel caught, which is a pretty good result considering the poor conditions.

One blank – Not telling!

SPAC Match 11 will take place on Saturday 14th Nov from 3.30 till 7.30pm with the venue and trophy to be notified. I will be looking at a few venues to see how the beaches have been faring since this years beach nourishment programme and will choose the venue that looks best. 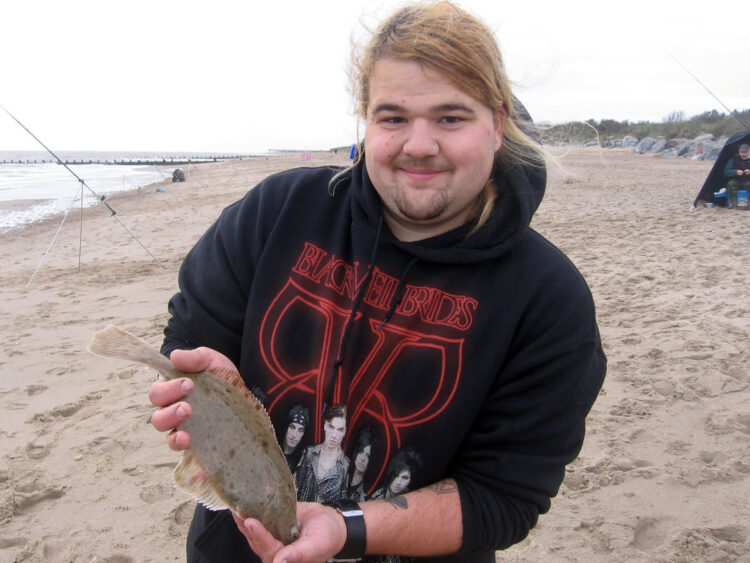 Kieran Brown with the longest flatfish

Please note that the match will be pegged, for SPAC members only, will be run under Covid 19 precautions and will again be pre-book only. It would be appreciated if anyone who puts their name forward then decides not to attend, to please let me know by the evening before at the very least, rather than just “no show” on the day. This Covid rubbish is not going away anytime time soon and whilst in the past it didn’t matter about turning up on match day, it causes inconvenience to the organisers nowadays if anglers who have pre-booked just don’t turn up on the day without prior notification.

Keep safe everyone out there and please contact me ASAP if you would like to fish Match 11.