Paul Marshall was in scintillating form in the Skegness Pier Angling Club (SPAC) annual away match, held on the tidal River Nene at Sutton Bridge. Paul ran out easy winner of the Frank Parkins shield, with a mixed bag of 22 flatfish and silver eels measuring 566cm in total, making it an amazing six wins on the trot from the venue for the Corby based match angler! As there were no qualifying fish caught, he also shared the longest round fish prize with a 35cm (1lb 2oz) flounder. Croxton’s Dave Burr was the other recipient of a half share of the round fish prize, also taking second place in the match with 13 flounders for 366cm and winning the longest flatfish prize outright, with a 37cm (1lb 4oz) specimen flounder. Grimsby ace Adie Cooper framed again in third place, with a six fish mixed bag for 176cm. 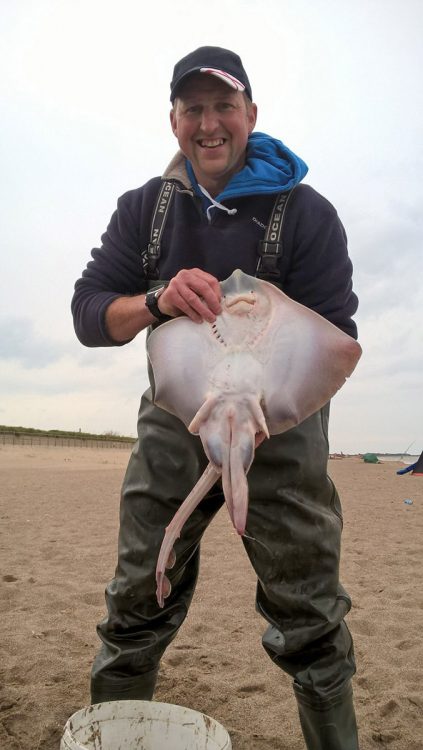 Trunch Lane was the venue for the annual Species Hunt, with the format being 10 points for each different species caught, then one point for each further fish of the same species. The match went right to the wire, with last year’s winner Adie Cooper leading up until the last cast, when Stafford’s Dave Shorthouse pulled in a small dab to land his fourth species. He also caught a whiting, a weever and a lesser spotted dogfish, winning the trophy with 40pts. Adie had to settle for second place with a flounder, a dab and a thornback ray for 30pts, also winning the longest round fish prize with his 69cm (5lb 1½oz) ray. Wrangle’s Alan Steadman came in third with four fish of two species for 22pts and also won the longest flatfish prize with a 29cm (10oz) flounder.

The next SPAC match will be held on Saturday 11th Jun from 3 till 7pm at Wolla Bank with Club members fishing for the Dodsworth Cup. There is also an open section, which non-members are welcome to participate in. For further information, please contact SPAC Secretary Chas Tibble on 07984 967988 or chastibble@hotmail.com