Another weather break for the Norfolk Angling Club and another Monday night club match saw 26 members, including two females and two juniors together with one new member all eagerly anticipating the start.

Our two juniors tonight were 12 year old Daniel Brown and Adam Molloy, 11 years old, both starting out with the club and proving to their mothers that they can both get out of bed the next morning. The pair caught many undersized fish and thoroughly enjoyed it. However, it was Molloy’s boy, Adam who managed to find a solitary sizeable fish to gain his first points in the league table, as well as beating his dad. 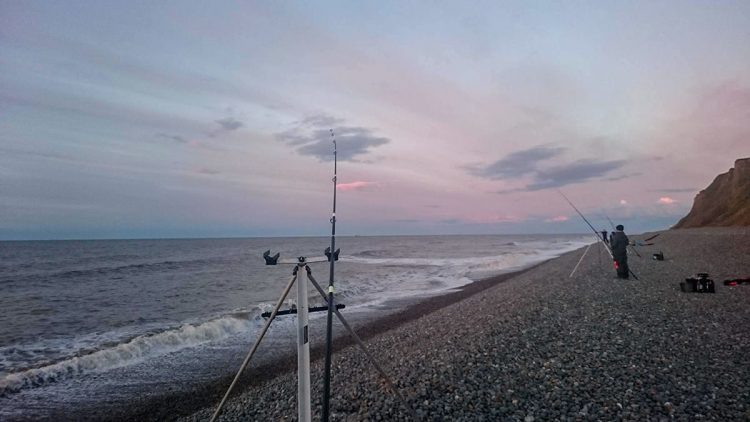 During the match rockling, dabs, and the odd sizeable whiting were being recorded all along the stretch but nothing to set things alight. Shane Brown had a cracking 32cm whiting which was the biggest of the night until Ian Gennery topped that with a cracking 38cm whiting down on peg 23 near the pipe area. He also managed a couple of dabs that put him in contention for the podium spots, but would it be enough.

David Lake on peg 8 back to full fitness after his operation had the best bag with five fish for a total of 1lb 8 1/3oz or which translates to 73pts, giving him top rod honours for the night, narrowly beating Ian Gennery’s three fish bag of 1½lb or 72pts into 2nd place. The final podium spot and her first time in the frame was Kimberley Lawn with four fish weighing 1lb 1 1/3oz, this being her best performance in the league and she put it down to her lucky charm friend who came along for the experience and will hopefully be another new member in weeks to come.

An almost a no pointer for Jake Cooper, who has been having a bad run of late, when he forgot to hand his card in even while collecting everyone else’s. Luckily, at the end, the error was spotted and he was back to his usual 4th place positioning. Our newest member Mark Miller also managed to save the blank with a solitary whiting to welcome him to the club.

A cracking turnout on a great evening with the rain only really taking hold after the match was completed, 40 sizeable fish were caught and returned and 20 anglers managed to card fish.

The club is now 50+ members strong and is the biggest club in Norfolk growing every week, and with the excellent banter and friendly support it can only get stronger well done to everyone.

All others receive 5pts