Ian Childerhouse shows how to fish to length at Sea Palling and retains the Simon “Luggy” Farrow Cup.

The last time we fished Sea Palling it was the 20th September with fish very hard to find (only 13 caught by nine anglers with ten blanks, not a happy time). Would history repeat itself with this 2nd match? In total 12 anglers met in good time for a 6:30pm kick off, despite the change of car park due to a very soggy field. It was a welcome back to Marc Lawson.

We decided to fish either side of the slip way with peg six being opposite the slip. After requesting a short walk Ian Childerhouse picked up peg 12 which was easy going to the right of the slip, he had smile on his face, did he know something the rest of us didn’t. With the threat of low fish numbers, we decided to fish to length. Anything over 18cm was carded but by length, not converted to weight points.

Early fishing showed what we were in for with wee whiting and wee dabs making an appearance. But activity on that right side of the pegs seemed to be keeping a smile on the faces of Ian Childerhouse (peg 12), Neil Rowe (peg 9), Stephen Medlar (peg 11) and John Spalton (peg 11). The reason was obvious when cards were checked at the end of the night, they’d found lots of fish relative to the last match. A Sea Palling local who stopped by for a chat confirmed that that end of the beach was the most productive, one to file for the future. 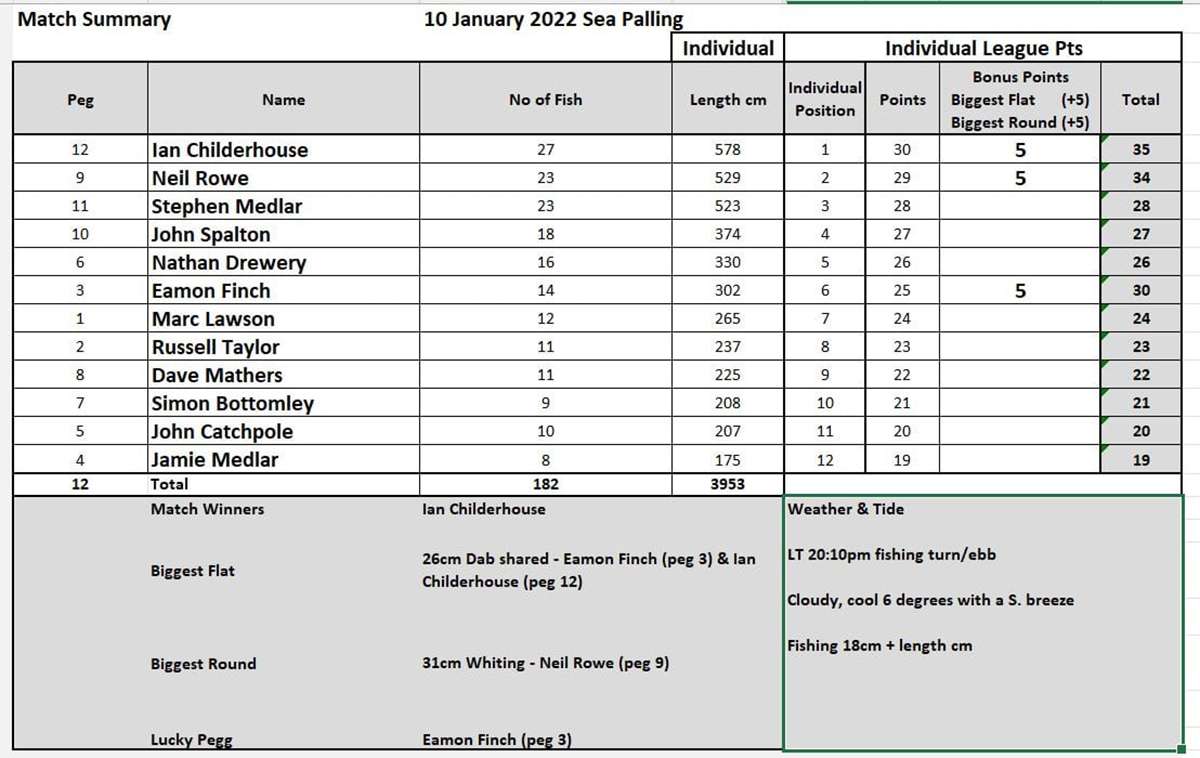 It proved a wise move fishing a length match as no one blanked. In total 182 fish caught giving a total of length of 3953cm. Of the 182 fish caught 48 were dabs, 2 rockling and 132 were small whiting.

Viewing the overall results, it was congratulations to Ian Childerhouse for showing how to fish a length match and in winning the Simon “Luggy” Farrow Cup, and it clearly was a bit of a tussle on that end of the beach with only 6 cm separating 2nd and 3rd podium spot.

The Simon “Luggy” Farrow Cup is held annually in memory of Simon Farrow a previous member of the club who died in 2016.

Next match will be 17th January 2022 at Gorleston with HT @ 20:24pm (so fishing the turn and down the tide). Keep an eye on our WhatsApp group for any latest information