Humber SAC fished Courtaulds Straight where they experienced a better turnout and more fish. Steve Robinson was first, followed by Karl Nangle in second and Ron Wight in third. Karl Nangle he had the biggest cod.

One absentee from the match was England International George Smith who was involved in an incident outside his tackle shop last Friday and had his leg broken in two places. Everyone at PSF wishes George a speedy recovery. Also big thanks must go to a young lady who assisted George, and also the ambulance crews. 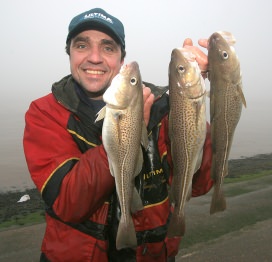 The club’s next match is on Sunday at the woods it is a biggest fish match from 3 – 7pm; meet at Wasteland 1.30pm.

Grimsby SAC had another fantastic turnout in their roving, heaviest fish match. Dave Burr made it two straight wins with a 3lb 2oz codling. There was a tie for second with Steve Field and John Atkinson both presenting flounders of 11oz. Richard Leek deserves a mention as for his 18 flounders from the shallows.

There is a new casting club starting up at Driffiled Showground, here are some first event details etc…

“It was decided that the first meet would be devoted to getting to know one another and generally having a fun time with casting practice, tuition, measuring etc. Dates have yet to be decided and appropriate insurance has to be found. It is thought that the following is a reasonably accurate estimate of what the club would need to get off the ground: £10.00 annual membership fee, payable in advance, in order for members to raise any issues and have any say in club business. £5.00 charge on meet days, to cover the cost of the field for the day (£2.50 per person) and £2.50 to go to club funds. Non members would be charged £8.00 as a day caster.
It was suggested that the main emphasis of the club would be enabling every member to reach his/her casting maximum potential, but there will be a wealth of angling knowledge available too. The adopt U.K.S.F. rules for the present time until a committee had been elected by the membership.”

Boats: Interest in the The M. J. Wilson Cod Open taking place on the 1st March, is starting to pick up, with around 90 anglers already booked in and a rush of local anglers expected next week. With a guaranteed first prize of £1000 it is one of the biggest small boat matches in the country. The long range forecast does not look to promising however.

This Sundays big fish match is cancelled due to the H.C.A. AGM. Chris Banks has suggested that there might be a sweepstake among the beach boats that go out.

Tackle: If you are looking for a new rod that’s competitively priced then it might be worth popping in to Clee Angling Centre, St. Peters Avenue. They now stock the Sonik rod range, and at around £100, the SK3 rods are well work a look.