Freezing conditions and a sea full of weed, almost saw several anglers pack up early and head for the Xmas buffet at the Lookout pub. Luckily at half five the weed completely vanished and bites started coming as soon as the rigs were cast out.

Once the weed had gone, the fishing began in earnest with Gordon Nelson landing a treble shot of whiting followed by a dab, flounder and whiting treble shot, including the longest flatfish of the match. Next to Gordon were John, Ian, Karl, Mark, Milo, and Russell all catching steadily with around three metres of whiting recorded each. 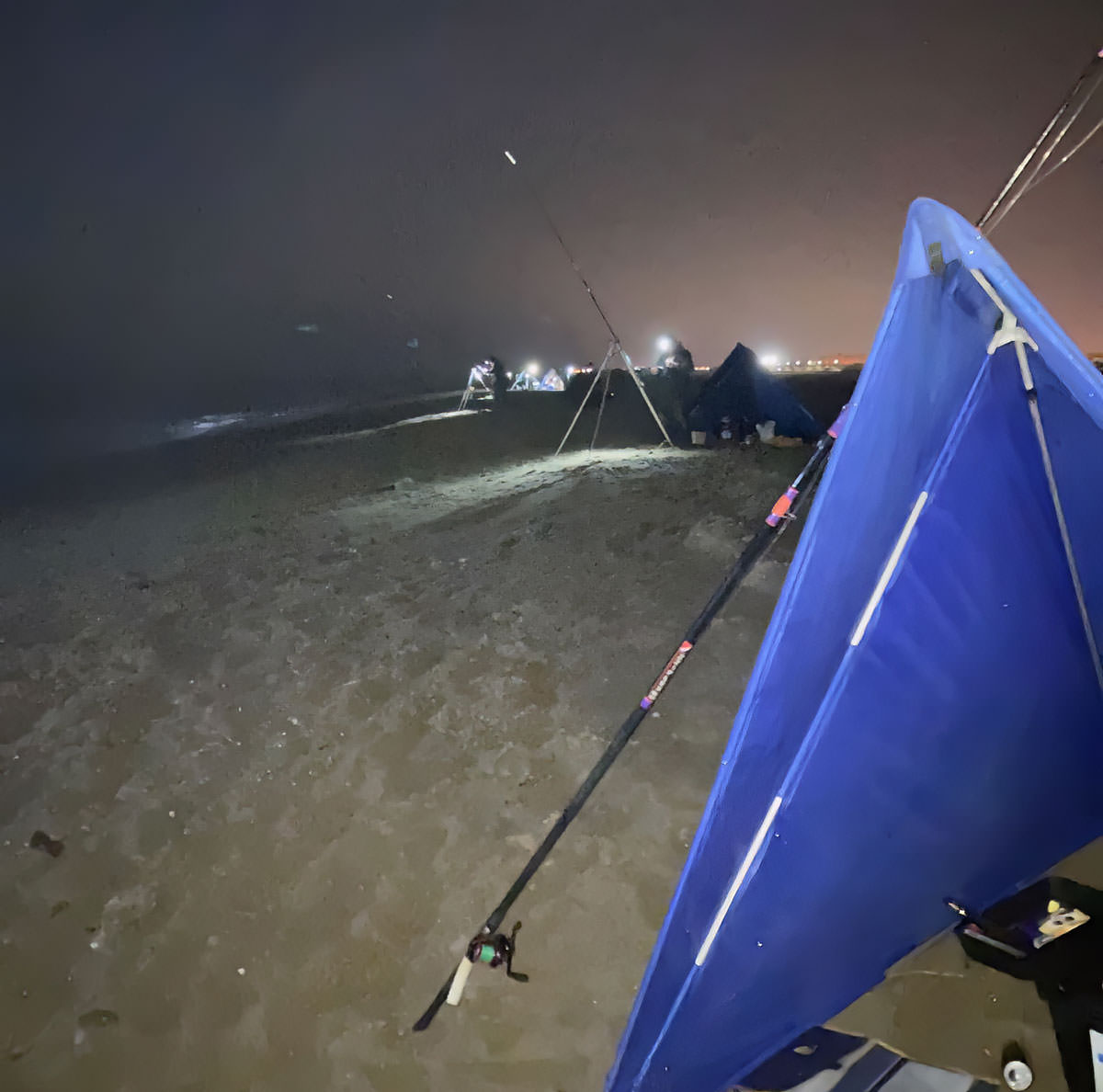 Further along on peg four Dave Shorthouse was frustrated landing only two fish per cast compared to the leader’s treble shots. Fishing hard he could not find the same concentration of fish as where in front of Dan and Adie on pegs two to three, this meant Dave was falling behind and had 367cm with and hour and a half to go. At the whistle Dave still trailed the two anglers to his left and finished third with 19 fish for 545cm. Dave would make up for his bad luck later on at the raffle winning so many prizes he needed two people to carry them out to the car! 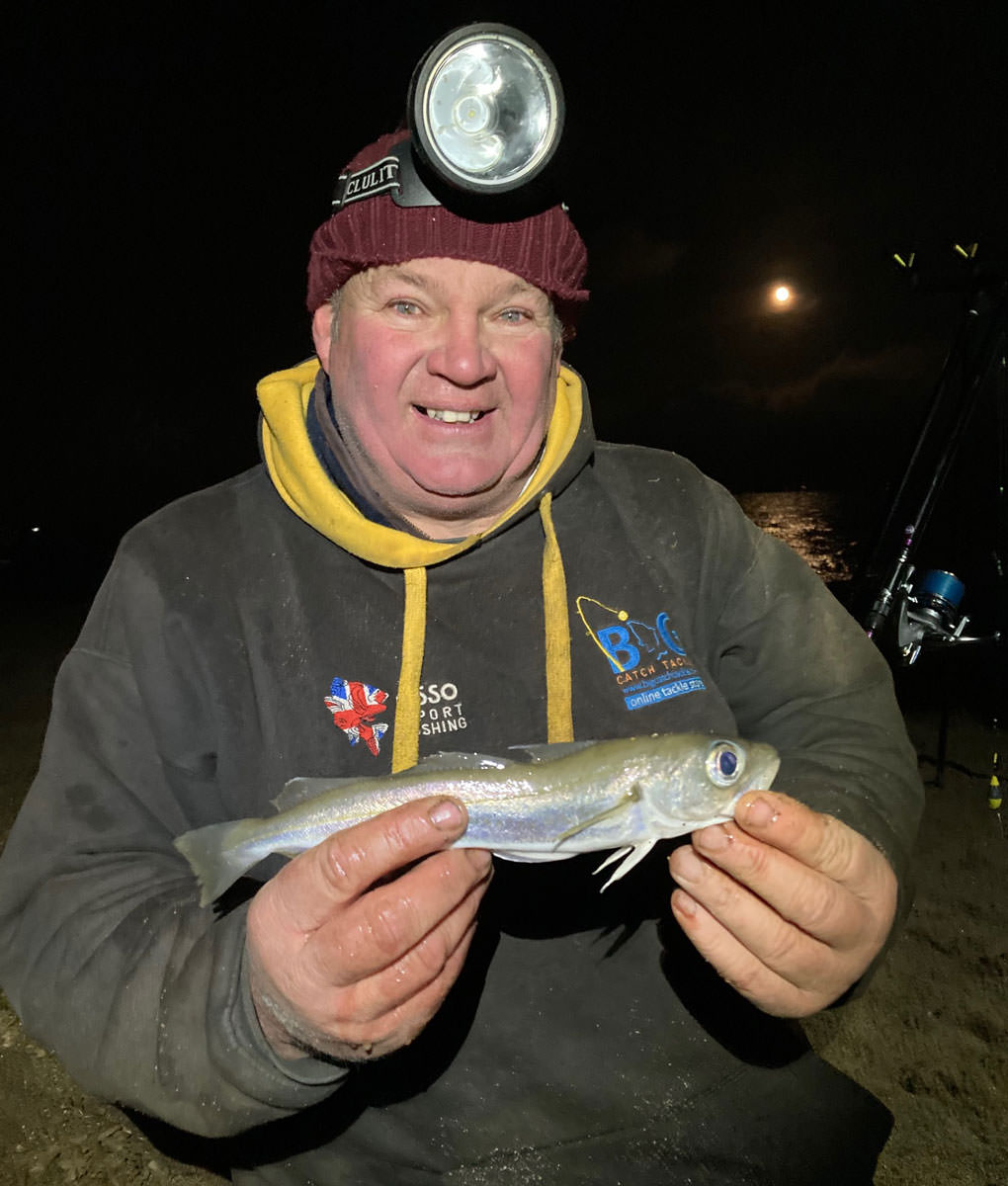 Dave Shorthouse in third place with one of his whiting

Dan Jackson had a hectic start to the match, landing eleven fish in his first four casts. Fishing at speed with black lug tipped with bluey on three hooks and casting well out into the tide.

Adie Cooper next door was fishing in his characteristic focused, efficient manner was around one fish behind Dan at half time. Adie’s expertise in match fishing; with everything to hand and all the small details correct such as changing rigs if the hooks were anything less than razor sharp, casting a long way and bait presentation kept him neck and neck with Dan, by 6pm both were on about 5m. 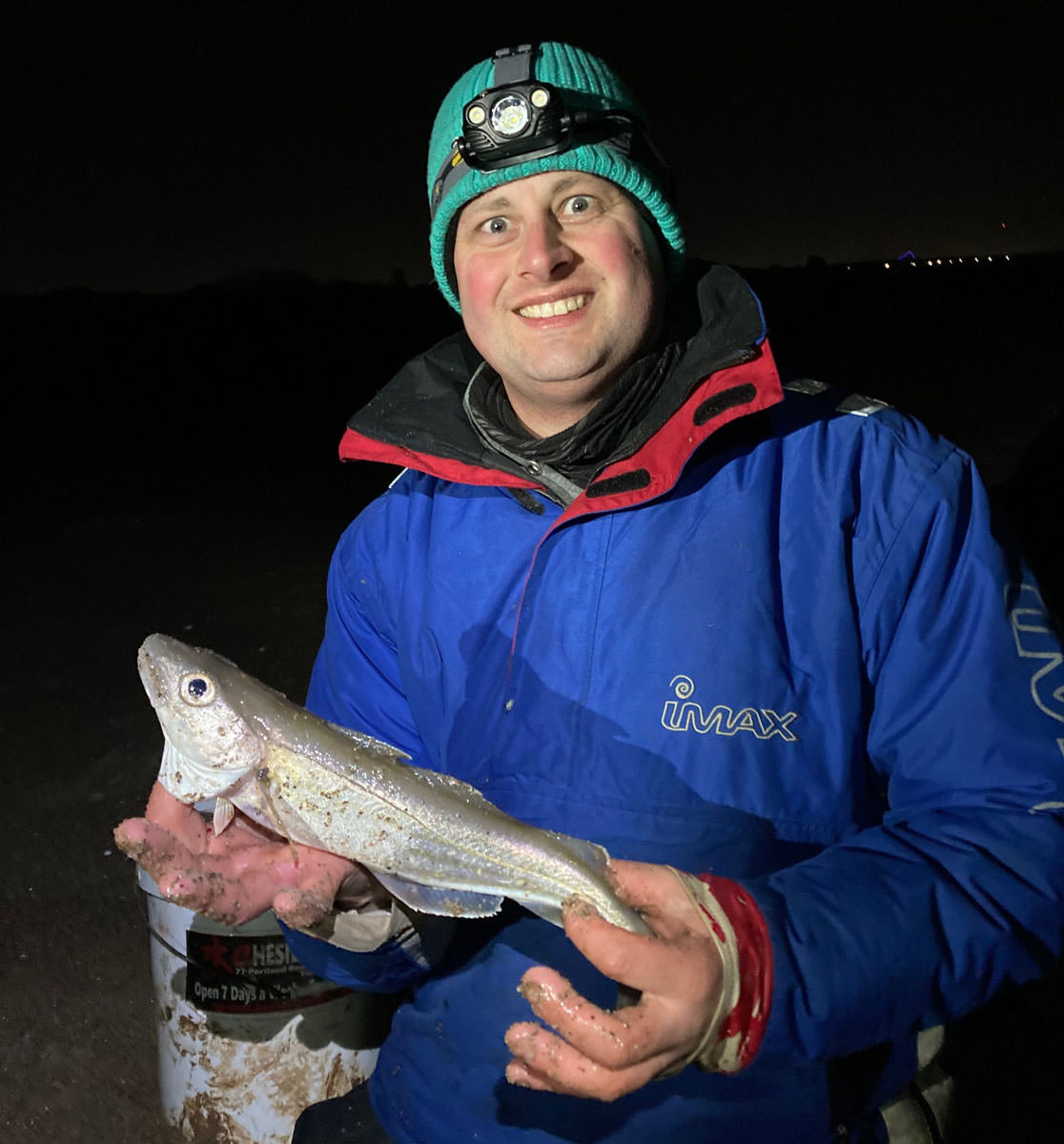 Adie and Dan continued moving up the gears landing whiting all the way to the finish, however Adie had dropped three whiting in the edge while Dan had not lost a fish.

In the last two casts Dan had a 39cm whiting followed by a treble shot and finished over a metre ahead of Adie to win the match with 28 fish for 801cm. Adie had one blank cast followed by a single small fish on his last cast to come in second place. He put this down to perhaps the result of using bait, which was a bit too fresh for the dabs and whiting which often prefer 4-5 day old pungent baits. 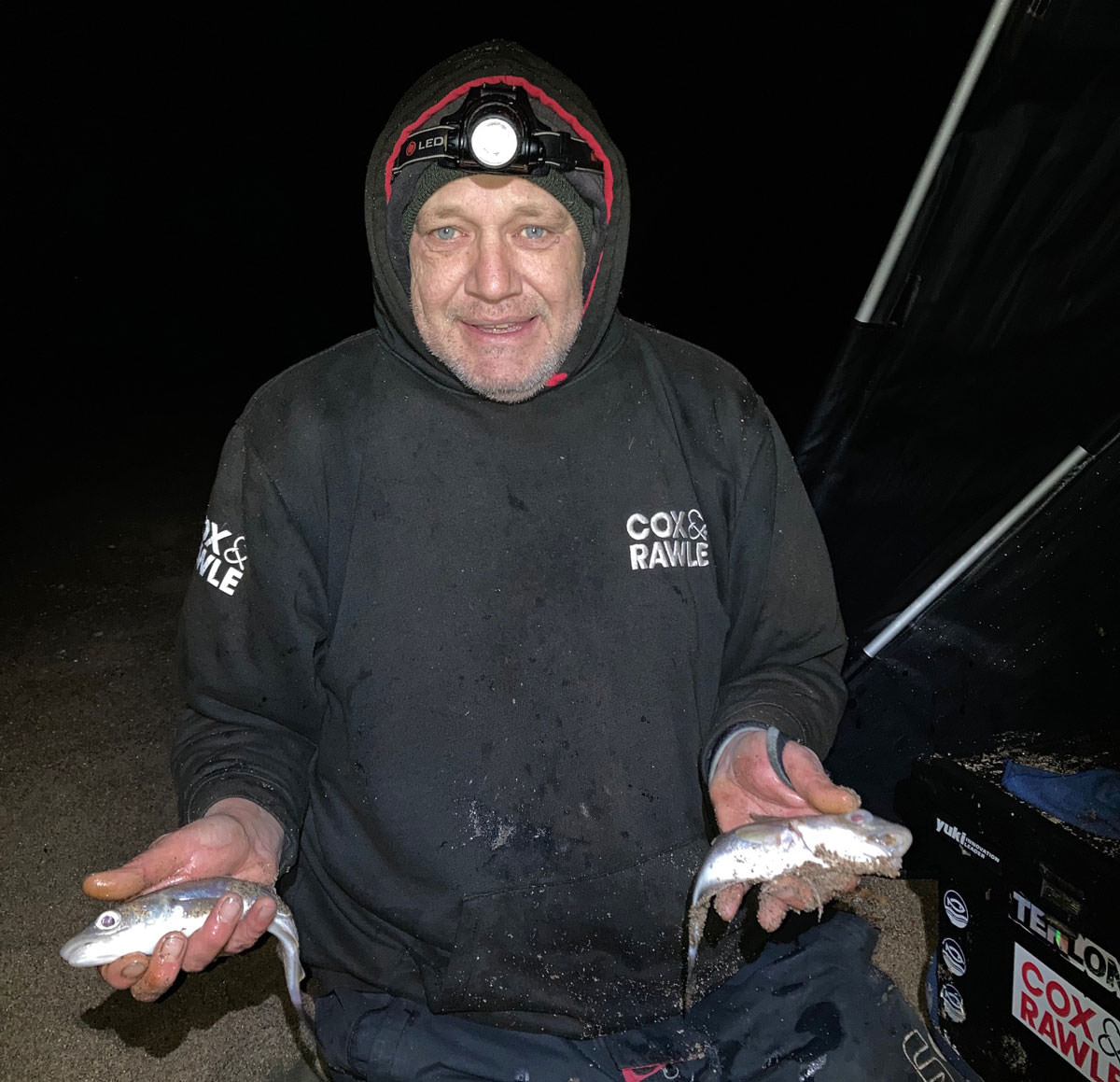 Ian with a double shot of whiting

He had left his match prepared wraps of black lug back at home and typical of the friendly club his bait was kindly supplied by Chas and Ian with some fresh yellowtails and fresh mackerel.

After the match everyone went to the Lookout pub for drinks and a delicious Xmas buffet prepared by Sue Tibble, with hot Sausage baps supplied by the Leighton family and Russ Taylor many thanks indeed. 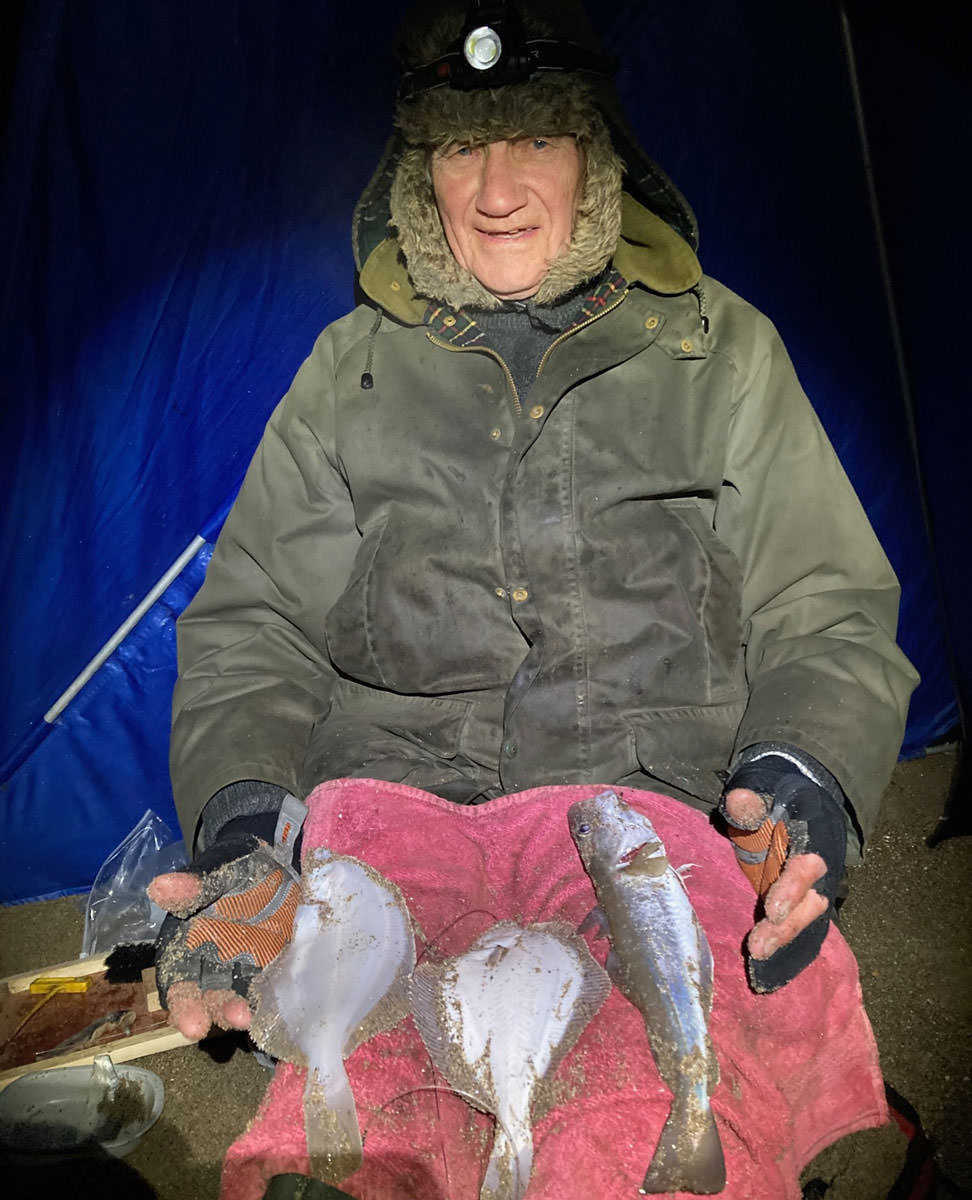 Gordon with a dab, flounder and whiting treble shot

The Raffle was amazing with some great prizes for everyone including chest waders, whiskey, a ‘meat voucher’ as well as beers wine and chocolates. This was a fantastic touch to end the club’s year, kindly organised and presented by the man at the heart of the club Chas Tibble who had put weeks of preparation into the event in a thoughtful and kind way which makes this club unique. We would like to wish Chas Tibble, a big thank you from everybody for the event and all the effort and dedication he puts into the Skegness Pier Angling Club. 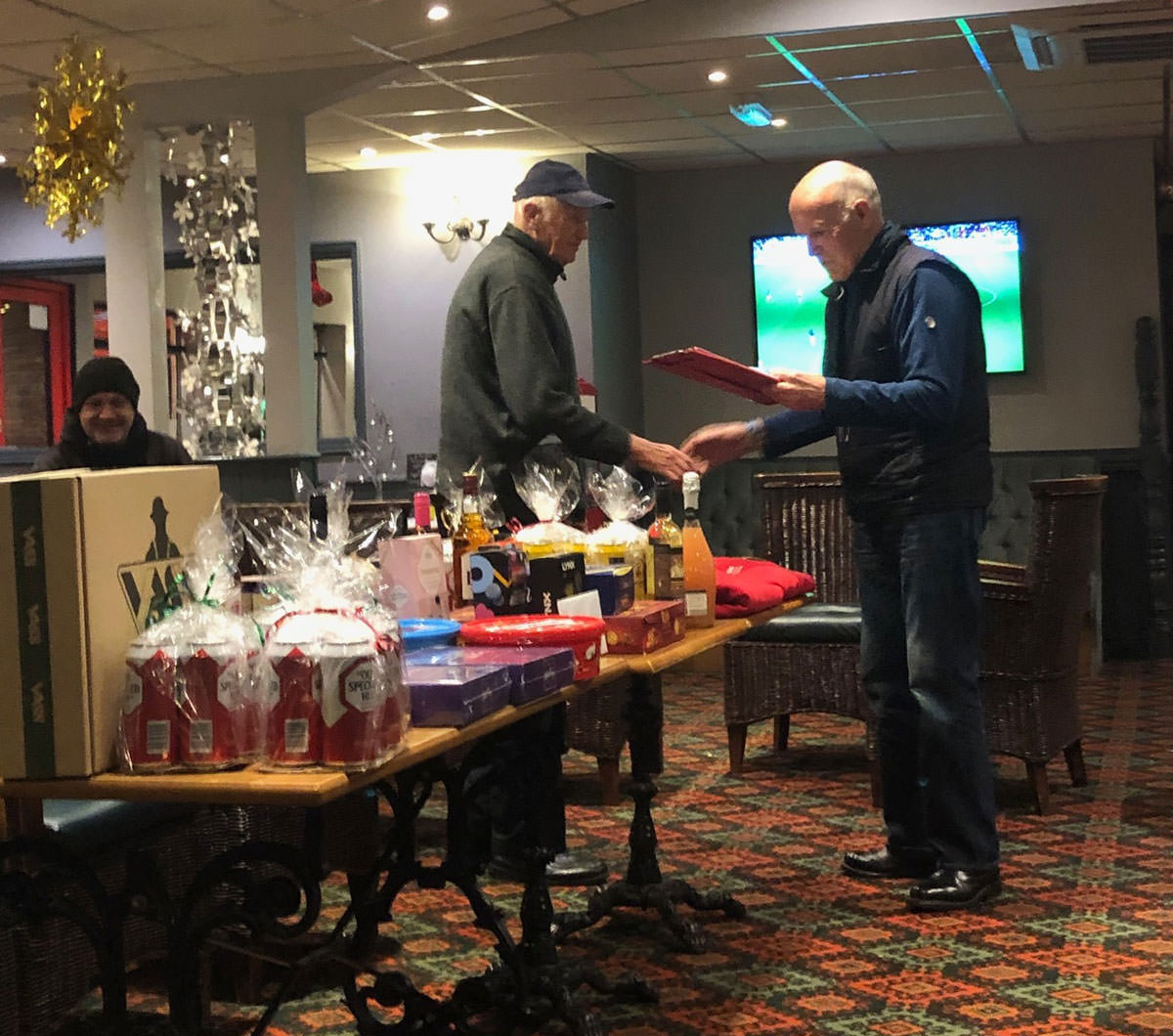 The next match is on 29th December at Trunch lane, we wish you all a happy Xmas and look forward to seeing you all there.