We seem to be hitting an in-between time at the moment, with boats reporting less fish this week.  Yes, there are fish to be caught, but nowhere near the amounts we’ve been seeing.

The tope season should be in full swing, but there certainly is a lack of fish to be caught, and this is probably due to the lack of their staple diet which is the mackerel!  Those mackerel shoals have all but disappeared.  Any tope that are being caught seem to be falling to whiting baits.

There also seems to be a lack of big smoothhounds around, still lots of hounds in the 8lb-10lb range, but those bigger fish are elusive. It is the same with the thornback rays, still some small rays there but the bigger ones have headed for deeper water, and to be honest, this is what we are finding every year.

Lester Baker, skipper of the Brightlingsea Sea Watch Charters, also reported a slowdown in catches, but still hounds, medium sized rays and a few bass.  Jackie Johnson was among a party of anglers that found the smoothhounds, she caught the biggest weighing in at 12lbs. The charter boat Sophie Lee has also reported similar catches, but soon the off-shore bass run will start.  Phil White’s boat Chinook reported several medium sized stingrays caught from inshore marks. Clacton Boat Club member John Sherry fished from White Swan from the Martello boat slipway. He returned with a bass of 6lb.5oz caught on a lugworm and squid bait. 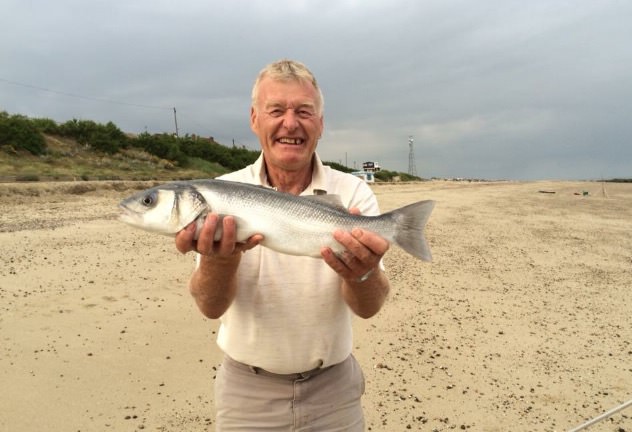 Clacton Pier has also been fairly quiet, although Lawrie Salkeld caught a very nice 4lb 3oz bass. Walton Pier has fished slightly better with sole, wrasse and a few bass.  Local angler Jay King fished the top of the pier on an early morning tide, and landed a 6lb thornback ray on his first cast.  The bait was peeler crab on a pennel rig.

Walton Sea Angling Club fished those famous Brighton Road beaches at Holland.  This time a few more fish were feeding, and top angler on the night was Richard Burt with 6lb 13oz, which included a 3lb 7oz bass and a ray of 2lb 15oz.  2nd place went to Rob Tuck with 5lb 1oz and 3rd Vic Pearce 2lb 3oz.

If you fancy fishing the local beaches then the evening tides will always fish better, top venues will be St Osyth, the Holland beaches, Frinton along by the golf course and either side of Walton Pier, all these areas will produce bass and sole and the odd ray.

Colchester Sea Angling club travelled to the Suffolk beaches of Dunwich at the weekend for their match.  The fishing was difficult and most of the fish were caught at range.  1st place was Mark Sessions with 4lb 3oz, mostly small smoothhounds, 2nd place went to Mark Peters 3lbs, which included a small thornback ray and Dave Clark was in 3rd with 1lb 13oz.