Another wet and windy week and unfortunately, the codling still haven’t made an appearance in any numbers, so seven weeks later than the norm. There has been the odd ones so maybe a sign that they are moving in. The mild weather and high sea temperatures for this time of year will be the culprit for that but I do expect them to show on the next set of big tides so fingers crossed.

Pier member Allan Cordwell has been back on the North pier targeting rays and huss, and reviewing the weather forecast, a chance of a first codling.

An early start saw Allan on the pier for 08:00 and, after a rapid set up, a two hook flapper and a 3/0 loop rig baited with squid tipped fresh black and yellow tails were dispatched into the surf. It wasn’t long before a number of flounder and dabs were gracing the deck with a small bass dropped on the lift.

All went quiet on the flood with the odd whiting putting in an appearance. He swapped the flapper for a 3/0-4/0 sliding Pennel rig baited with a bluey and squid wrap. Just before high water, the rod pulled down and then slacklined. The first ray of the session was played in and landed, photographed and returned. A wet slap in the face while trying to take a selfie with an angry, slimey, spikey fish was a reminder to not get slapped across the face by an angry slimey, spikey fish, a selfie stick is definitely on the Santa list this year!

The action continued with a total of five ray being landed on the ebb with three being decent in terms of size. The worm rod kept me busy with numerous dogfish, whiting, dabs and flounder being accounted for along with a small huss and codling.

The weather was something to behold with every connotation being experienced apart from snow, moving from squally rainstorm requiring waterproofs, to breaking out the sun cream at the end of the afternoon. As the ebb continued, the wind moved south easterly, the sea flattened and the skies cleared resulting in brilliant sunshine. 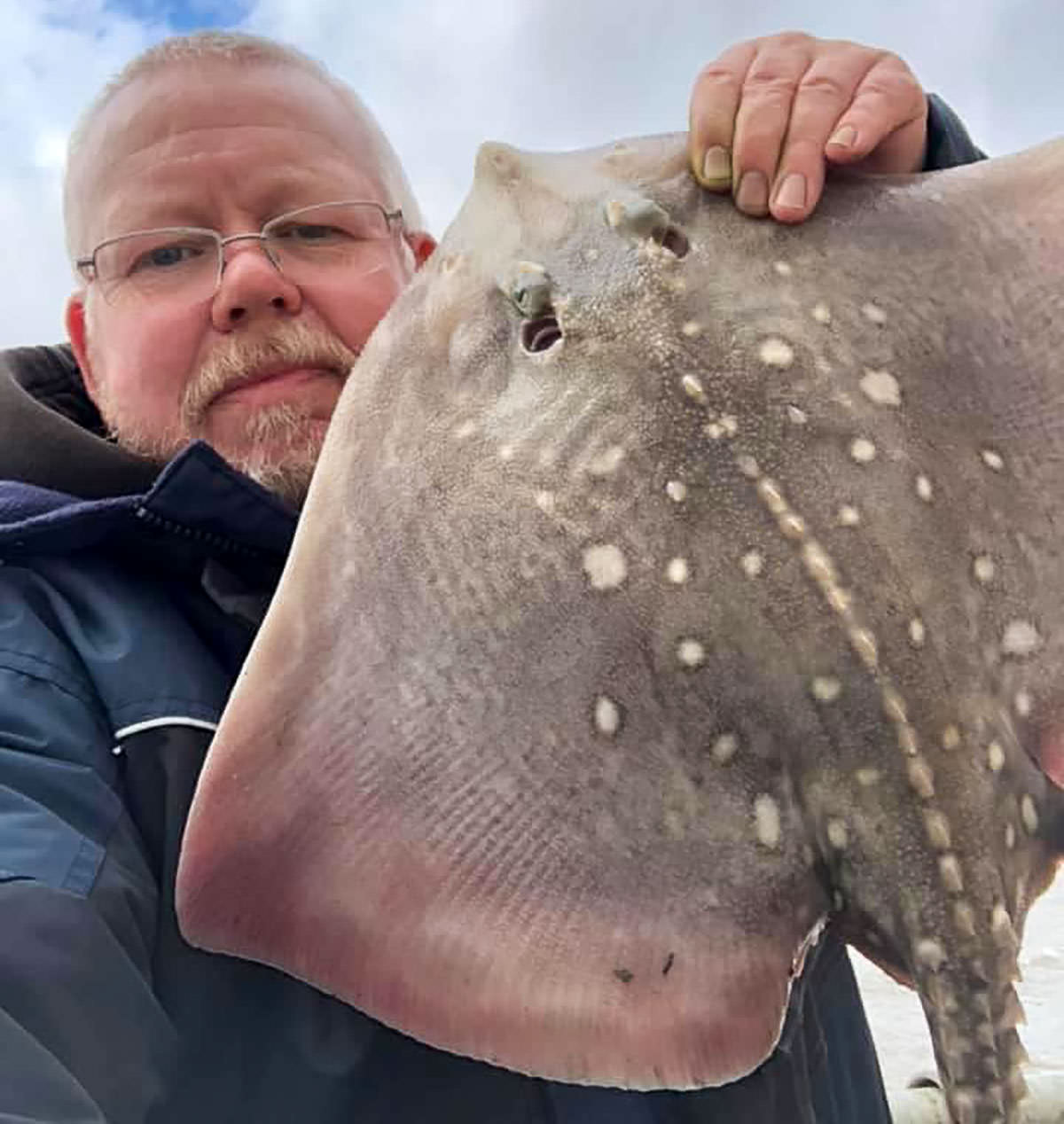 Allan pictured with a thornback ray

Experience has taught me that that this combination is an action killer in terms of bites so a slow pack down ensued which saw me heading home earlier than expected through the throngs of visitors to the resort.

Overall, a respectable session with only three anglers present, nice to have met Paul & Tom who made an impressive trip up from Crewe and good to get reacquainted with the pier after spending most of my fishing time afloat so far this year. Thanks also go to Jordan at Bispham Angling and Springfield Sea Anglers, North Pier for sourcing fresh bait at short notice.

The wind was not as bad as forecast and from the south south east so there was a bit of a swell but very fishable, there were a few heavy showers to contend with.

Fishing was for small whiting and dabs with an odd plaice, flounder, a dog and a rockling.

John Hughes had the best flounder, a 39 cm fish, and Neil Porter had the only dogfish of the day.

Congratulations to Trevor Barnett for winning the match with a catch of whiting and dabs. Worm tipped with squid or bluey fished well.

The next match is on Saturday fishing the Fleetwood channel over high water from 6pm until 9 pm.

Dave Brown had not fished for a while so he grabbed the chance to fish the flood the other night. He had a mix of fish whiting, dab, plaice and the inevitable dogfish but Dave did manage a couple of rays and my first October caught smoothhound weighing 7½lb. 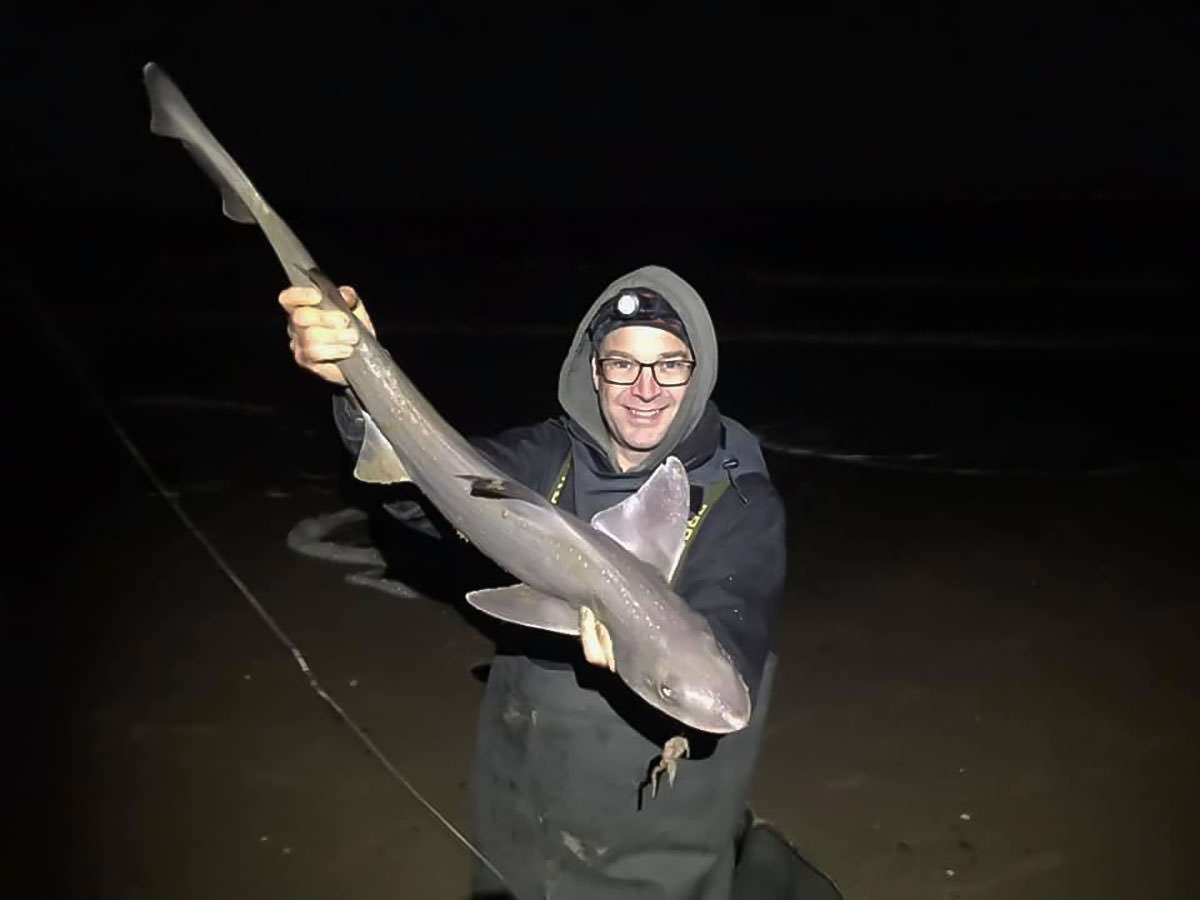 Leyland and District Sea Angling Club fished their latest match on the Stone Jetty at Morecambe.

1st Peter Pilkington with 1 rockling & 10 whiting, one of which was the biggest fish at 36cm

The £10 Golden Peg card was won by Stuart Pilkington. Thanks again to all who supported the match.