Autumn has moved in with a bang this week, it was only a few days ago that we were fishing in warm and calm conditions and now we are seeing temperatures struggling to get into double figures and high winds have made boat fishing difficult. Bigger bass are showing well along with thornbacks when boats can get out, and the packs of hard fighting smoothhounds are now thinning out which was only to be expected. Plenty of whiting and the odd codling.

We are now entering into October and traditionally it has been a time for anglers to hit the beaches and piers for codling and even some bigger cod! Those heady days of bags of cod being caught are now just a distant memory, but dare I say we are seeing a few sizeable codling being caught. Rob Tuck landed a nice codling during a daytime session on the Holland on Sea beaches, and there are also reports of a few codling showing on both the local piers. 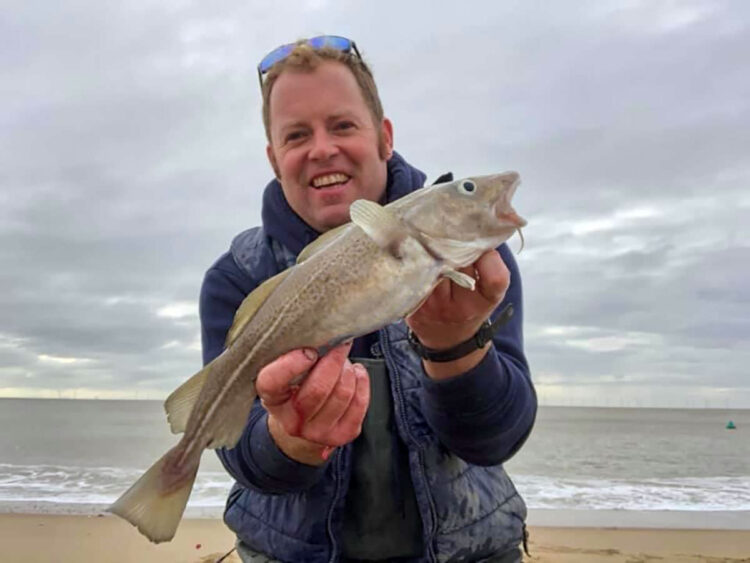 Walton Pier fished very well with Matt Clark and Dan Tulip both into codling from here during rough conditions.

I fished the pier on one of my late-night foray’s, I didn’t catch any codling but did land some thornback ray to 8lbs along with whiting and dogfish.

The high winds have now dispersed the mackerel shoals that were building around the pier and without any real calm spells due it could be the last we see of them till next year.

The Walton beaches are seeing school bass and soles from most areas along with plenty of whiting after dark.

The slightly deeper waters of the Holland/Clacton beaches have seen thornback ray feeding in fairly close, and also some codling feeding on the rougher days. 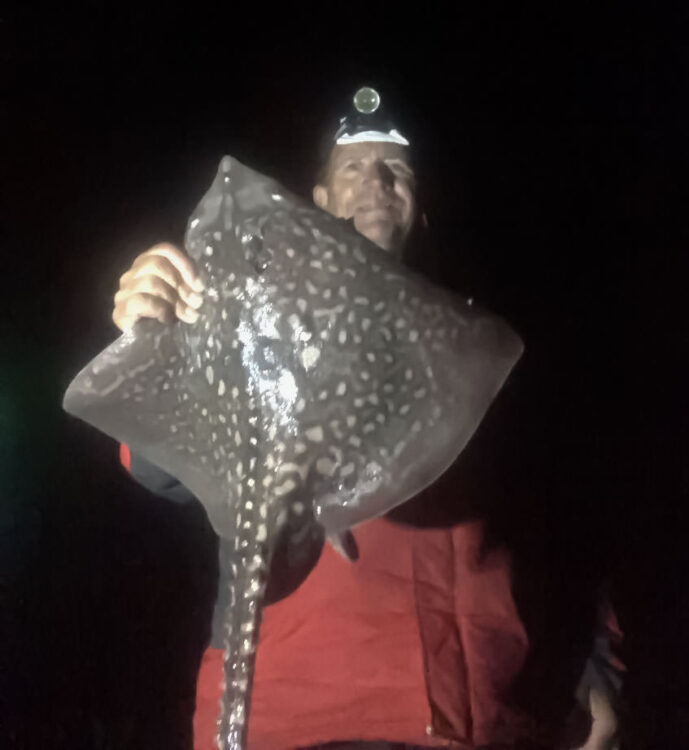 The thornback ray have moved back closer to the beaches and piers. John caught this 8 pounder from Walton pier

Clacton Pier is seeing its fair share of bigger rays, bass are still feeding here and there is always a chance of a big bass feeding under the pier, so a large fish or squid bait dropped down the side could quite possibly see you landing a bass of a lifetime.

St Osyth has been quiet for a few weeks now but as we have slipped into a new season it has picked up. Traditionally the beach has always produced some good catches of whiting and this Autumn is no different, not every anglers’ cup of tea but after dark they are feeding voraciously and the bigger ones do make for very good eating!

Thornback ray have made an appearance here and most are being caught just over the sea wall, squid or bluey baits should catch you a ray, so no need for the long walk along the beach to the nature reserve as most of the rays are being caught in front of the car park between the rocky groynes.

Dogs and Whiting On Lancashire Coast