Allan Enjoys 24 Hours On The Pier

Pier member Allan Cordwell reports that his weekend session was another hard won affair. With the prospect of not being able to get to the pier for three weeks and a weekend pass while the boss and nippers were away at relatives, Allan decided in his infinite wisdom to go ‘all out’ and do a marathon 24 hrs covering two floods and ebbs.

He arrived Saturday at 13:30 hrs after picking up fresh worm from Jordan Russell and set up two rods fishing the right hand side of the pier into the channel. One rod with 3/0 & 4/0 sliding pennel baited with bluey and squid wraps, and the second with 10/0 Cox & Rawle meat hook on 100lb wire pulley rig, with 100lb nylon baited with a full mackerel.

The tide was ebbing but still had enough depth to hold good fish. Whilst these rods were being set up, I fished a stepped up bass rod with 3/0 two hook flapper on 30 lb braid. First bites came rapidly with a succession of whiting, some retained for fresh bait, followed by a couple of plaice and a small bass.

Once the big baits were cast into position, he reeled in the lighter rod and concentrated on the two main rods. Within a couple of minutes, the wrap rod arched over and a nice tope pup was landed. Small tope pups continued to take the wraps until the water was very low. 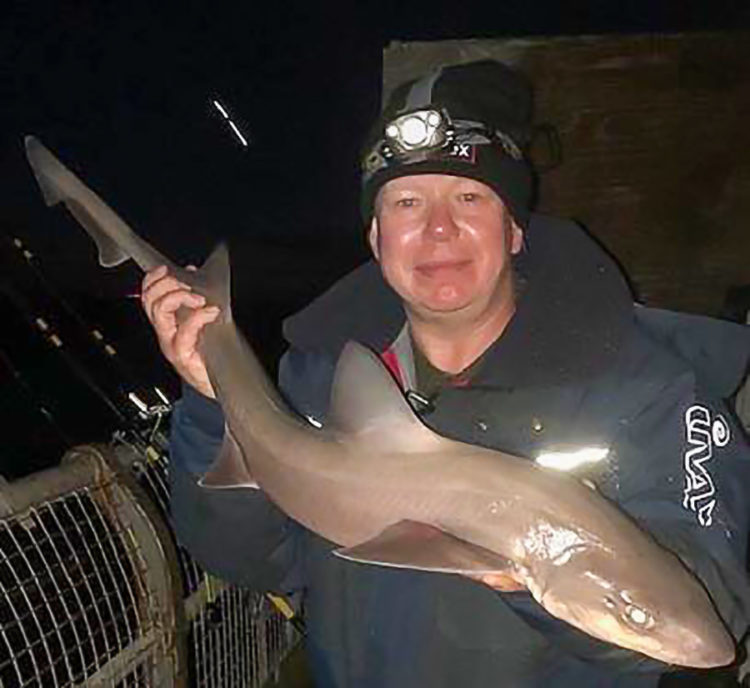 Allan with his smoothhound

After chatting with club member Chris and putting the world to wrights, a quick tidy and regroup saw Allan ready for the first flood. The worm rod went back out and it was pups and whiting but a lot a missed bites. Hook sizes and snood lengths were increased and decreased but still a high proportion missed the hook up.

As the flood continued the worm rod was stood down and the big baits went out. The wrap baits were smothered by the small tope pups with the odd whiting hanging themselves on the pennel. High water passed and darkness fell revealing a stunning blood red moon with Jupiter lit up to its right. By now I was the only mad enough angler left, staying on through the ebb. All action had ceased at high and little happened for a couple of hours.

He changed baits regularly and kept a routine going. He was accompanied by Ray the security officer by this time and were debating the lack of activity when the full mackerel rod arched and the 525 ratchet sang out. Allan connected with the fish but only briefly and put the loss down to an early strike. While he was re-baiting, a flapper rig was cast out with black worm tipped with crab. This rod was out less than five minutes and it was pulled round violently and fight ensued which Allan initially thought was a very big bass. It became apparent that it was a good sized and very angry smoothhound. Eventually netted, it took the scales to 10lb 6oz and another new personal best! Allan was ecstatic with the stunning fish.

The big bait went out once again and twenty minutes later, the ratchet sang again and a tope around six pound graced the net. Sadly, she was bleeding heavily from the 10/0 so was promptly returned. 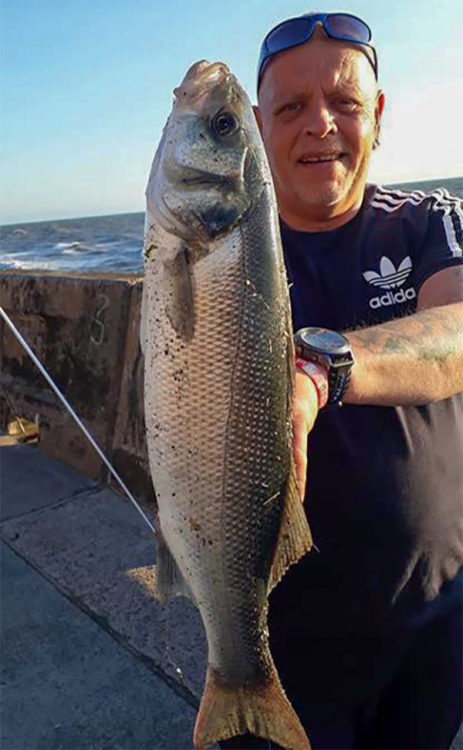 As the tide receded he brought the big baits in and concentrated fishing in the surf with the worm rod. A nice 38cm bass gave a solid bite and hard fight. There was just enough water for a last chuck after a quick re-bait with blackworm and crab.

As the lead hit the bottom and settled the rod arched over and slack lined and to his astonishment, a plump 39 cm cod was landed. Allan grabbed an hour shut eye and then made ready for the flood. More pier members arrived and I repeated the same process with using the worm in the surf. The wind had swung round to an easterly and it was slow going with only one run on crab and a number of plaice and Dover sole before tiredness pushed him to head home. Another enjoyable session but required a lot of effort to get the results, however, more than pleased with a stunning double figure hound, a very mixed bag and the small tope.

Recently there have been some nice bass about from the shore and the boats. 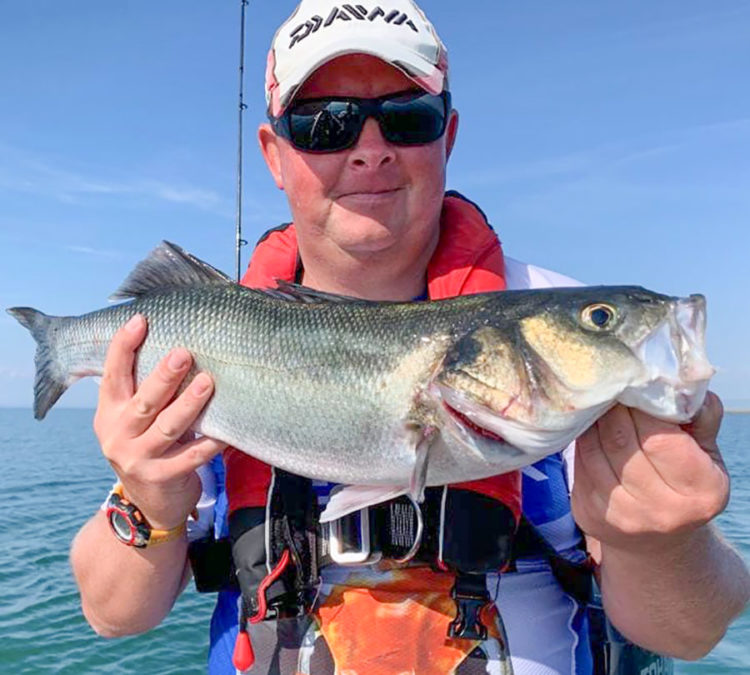 Mark Yule with a bass

A mixed species session off the rocks of West Cornwall