A very similar week to last week, strong winds at the beginning of the week made boat fishing difficult, but beach and pier anglers did fare better.

Walton Pier has been fishing fairly well for sole, from the bottom of the pier and also at the top left hand side, with most fish being caught on ragworm baits. A few of those early autumn whiting are now showing here, plus the odd codling. The Walton beaches are also fishing well for school bass and sole on the evening tides after the tourists have gone home and the beaches are quieter.

Walton Sea Angling Club headed for their local pier for an evening match, and conditions were perfect, with clear skies and calm seas. They fished an incoming tide and fish were there from the off, with bites for all competitors. Top angler on the night was Jon Wilson with 10 fish weighing 3lb 7oz, close second was Rob Tuck whose 12 fish weighed 3lb 2oz and 3rd Chris Mills seven fish for 2lbs. Heaviest fish Ken Peacock with a 12oz sole.

The new Holland beaches have been quiet, with just the odd school bass and sole to be caught. Clacton Pier has seen the odd thornback and bass, plus reports of the odd brill to be caught. 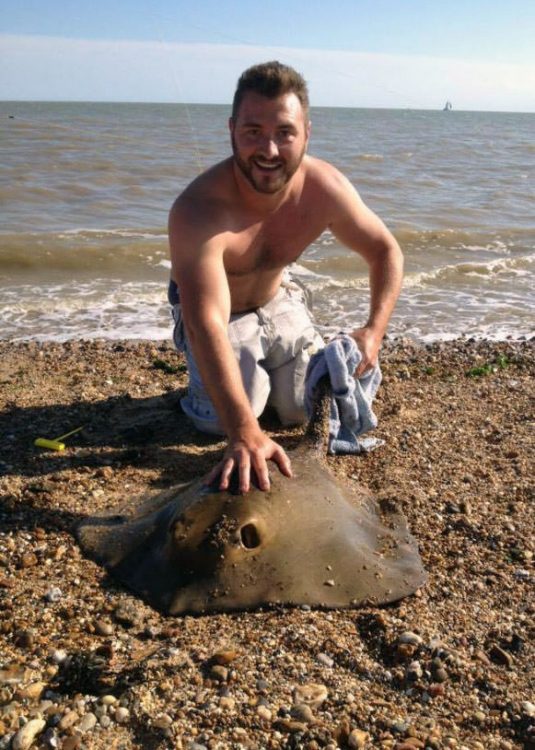 It seems the place to be again this week is St Osyth beach. I travelled here once again at the beginning of the week in blustery conditions on a bass trip and it didn’t fail me. I ended the session with nine bass to 5lbs plus some very big eels and whiting, all the fish were caught only a matter of 50 yards out. Tim Wilkins also headed for St Osyth beach in slightly calmer conditions, and he managed to catch one of those heavyweight stingrays that the beach is famous for. Unfortunately he had no scales to weigh the giant fish, but it was probably around the 40lb mark.

The boats have also had a reasonable week, with some of the autumn species creeping in. Plump autumn codling are now being caught plus a lot more whiting are appearing. Smoothhounds are still top of the list of species being caught plus a few thornbacks and bass, although most of the bass are on the small side. Clacton Boat Club members Barrie Sage and John Cook launched their boat from the Martello Tower and reported that the fish were feeding on the Gunfleet Sands. They caught thornback rays, hounds, bass and once again codling to 4lb 5oz; all their fish were caught on lug and squid baits.

Summing up this week, it looks like we are in that period of change, when summer turns into autumn. We are now seeing whiting and codling being caught and the big tides at the end of August will certainly see bigger codling from piers and boats.