With temperatures hitting 20OC at the weekend and the light winds that came with it, it was all very beneficial for the boat and kayak angler.

More of the summer species are now being caught with those smoothhound packs starting to appear with more regularity. Most of the hounds at the moment are in the 4lb range but bigger fish will surely follow in the next few weeks. The bass are also showing but are still spasmodic although fish to 8lbs have been caught this week. Once again thornback rays are feeding in force from all venues and very soon we will be seeing our first mackerel showing and with those will bring those marauding tope.

Members from the Clacton Boat Club put to sea at the weekend and they reported that the fishing was good from the Barrow deeps to the Gunfleet sands and even inside the sands was producing some hefty bags of thornback rays and a few bass.

John Clark fished from his own boat and caught 20 good sized rays. Dave Hollands and Rocky Rochelle told me that they caught rays from the far side of the Gunfleet sands and they also had smoothhounds to 5lbs, plus Rocky landed a fine bass weighing in at 7½lbs. The fish were returned as required until 1st July, thereafter one bass may be retained till the 31st December 2016 and after that we will have to wait and see as to what governing body is in charge. 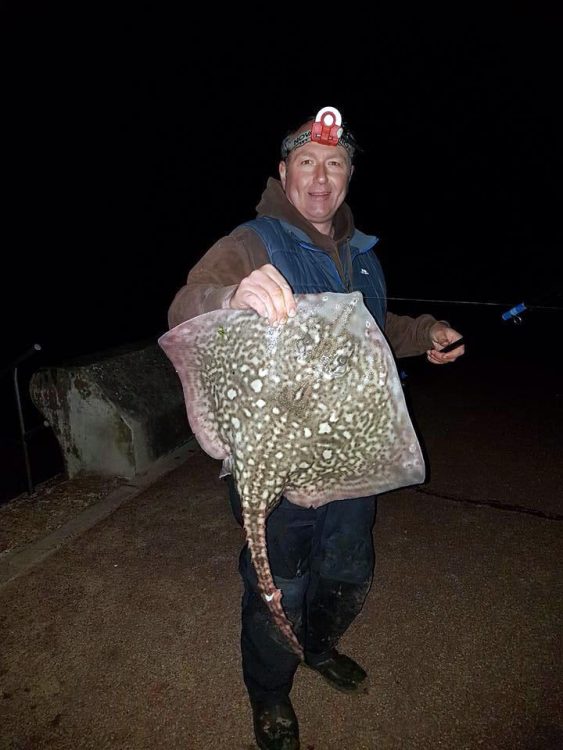 The Brightlingsea based charter boat Seawatch skippered by Lester Baker reported that the smaller hounds were now showing and still plenty of thornback rays.

The beaches and piers have fared less well during those sunny daylight hours as most of the fish have headed for deeper waters and only coming closer under the cloak of darkness.

The Walton Pier Club fished their latest match on the local pier during our mini heat wave and fish really were hard to find. Only a few fish were caught – a few flat fish and some small bass. First place went to Andrew Westhrope, with Colin Harris second and Graham Distill third. The club also reported that there were at least 50 pleasure anglers fishing the pier and they reported that fish were few and far between.

Walton Sea Angling Club also headed for the pier for their evening match with the hope that fishing into darkness would improve the fishing, and so it turned out to be, with most fish caught directly below them in between the pier piles. Small hooks and baits were the order of the day and fish caught were mostly pouting, whiting, wrasse and pollack. The winner was Rob Tuck with 5lb 11oz, runner-up James Doe had 3¾lb, Nik Highfield in third weighed in 1lb 5oz and the heaviest fish was a 12oz pollack for Rob Tuck.

Clacton Pier has been fairly quiet during daylight hours, but after dark the dogfish and rays have been feeding, with the local surrounding beaches catching lots of small bass plus a few eels.

The high tides for the weekend are Saturday 18.38pm and Sunday 19.45pm