It has been a good week for the boats with light breezes and calm seas. The charter boats have had a bumper week with the some cod into double figures, thornback rays and also a few bass. The Charter boat “Sorcerer” out of West Mersea reported some bigger cod this week, with Ray Hempstead, the skipper, catching the biggest, weighing in at 12lbs, plus plenty of smaller cod and rays and plenty of those autumn whiting. Lester Baker, skipper of the Brightlingsea based “Seawatch” told me that he has been seeing a better average size codling this season, and still rays into double figures.

The Clacton Boat Club also took advantage of the settled weather and lots of their members headed out to beyond the Gunfleet wind-farm at the weekend and it certainly paid benefits. Reports were very good with cod to 8lbs and thornback rays to 10lbs, plus still a few bass, with Diane Kkala catching the biggest, weighing in at 8lb 6oz. She caught the fish on a live whiting bait. The Walton boats have also had similar week with boats heading for the Gunfleet. Don’t forget boat anglers the Medusa area is only a short trip but is now producing some good size cod, plus there is always a chance of picking up some very good bass here. 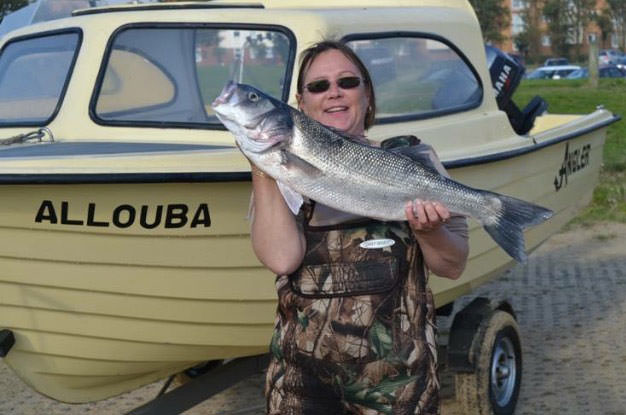 The beaches have had an up and down week with the calm sunny days making it difficult for fishing in daylight hours, with most of the fish venturing in closer to the beaches after dark.

My trip this week was a day time trip to one of the newly opened Clacton beaches. The sun was shining and the sea was calm, and to be honest conditions were pretty awful for any decent catches, and so it proved. I fished an ebb tide and ended the session with three small whiting and a pouting. I also struggled with lots of weed weighing heavy on the lines, so it just goes to prove that conditions have to be right to catch those bigger fish.

The piers have fished better than the beaches this week having slightly deeper water to fish into. Local angler Peter Rose caught codling to 4lbs from Clacton Pier, most of his fish were caught on lugworm and squid baits. Walton Pier is still producing thornback rays plus codling from the top of the pier and if conditions are rough they will also be caught from the stem of the pier.

Clacton Angling Club fished the St Osyth beaches for their latest evening match. Only five anglers fished, but between them they managed to catch an amazing 103 fish between them, of which 91 were whiting, three thornback rays and one solitary dogfish. 1st place went to Rob Tuck which included 2 thornback rays; in 2nd spot Lawrence Chisnall with 23 fish and 3rd Nik Highfield with 30 fish. Heaviest fish prize went to Lawrence Chisnall with a 50 cm ray.

Colchester Sea Angling Club headed for the Suffolk beaches of Felixstowe for their night match. 11 anglers fished, the fishing was patchy, with some anglers catching and some struggling. Crabs seemed to be a problem with the bait disappearing quickly to these ravenous creatures. Whiting and dogfish were the main catch, and coming out in top spot was Mark Sessions with 8lb 8oz, 2nd place was Mark Peters with 5lb 3oz and 3rd spot went to Steve Yallop with 4lb 3oz. The heaviest fish prize was shared between Mark Sessions and Mark Peters with a dogfish of 1lb 8oz