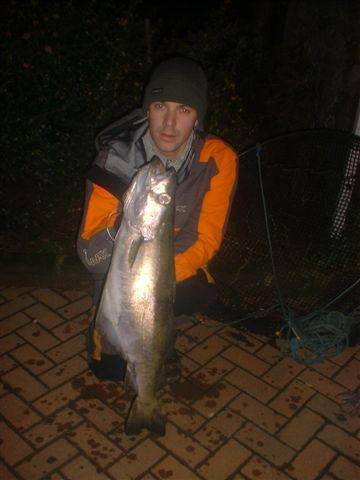 Normally January is very good month for fishing from Alderney shores however this year the sport has been pretty dire. Sole, red mullet and bass which are normally about in good numbers have failed to show in any quantities for the anglers. The commercial nets are doing very well so maybe the colder than normal water temperatures have had a detrimental effect on feeding patterns.

Anglers also watch helplessly on as tons of roe’d up bass each week are landed and transported around the island on the back of lorries, which can’t be good for future stocks in the English Channel.

This current situation has resulted in anglers switching the focus of their fishing methods. Roving angling with lures has over the past decade become more popular. Traditionally the artificials involved in this style of angling would be lures made from metal and hard plastic. These hard lures are gradually being superseded in a lot of situations by soft plastic lures simulating small fry, shrimp or crab. The lures are fished in conjunction with light jig heads of around 3 to 10g.

Among the effective techniques is a variation of bottom bouncing where the lure cast out across clean ground and twitched back to the shore. This creates small, cloudy puffs of sand on the sea bed which predatory fish come to investigate and then bang; fish on! It’s great fishing and a totally different concept to how my generation got brought up to fish. One local angler who I have mentioned my previous reports, Dick Smith, is one of the leading rods using this style of fishing and he now almost solely concentrates on this method with his beach rods only coming out for the Festival and a few other rare occasions. It has accounted for many big wrasse to 7lb, pollack into double figures and good sized bass. This month alone when I was with him on one session he had a garfish around 2lb, far bigger than what we were catching conventionally on floats and spinners.

Having just mentioned how rarely Dicky’s beach rods are brought into action he did celebrate New Year’s Eve with a bull huss of 12lb 4oz and one of over 9lb, a cracking result. So even when it is difficult fishing, armed with the right knowledge of when to do what you can still be catching fish.

One of the bright spot is the squid fishing, that’s been fun when the weather allows with blank sessions rare and it’s not unusual to land half a dozen of the cephalopods during an outing.

After enjoying being involved in the species race over on Beach and Boat during 2010 I’ve decided to set myself a target of 50 species this year. The difference is that this year I intend to only count those fish caught in Alderney waters. I made an early start to my campaign by targeting red mullet, thick lipped mullet and sole as the first two of these eluded me last year when I targeted them at the end of the season. After three sessions it became clear to me none of these species were around and switched to small eyed rays and the three species of rockling found here, the 3 bearded, 5 bearded and the shore Rockling. This involves different baits, different rigs and different venues. After five further sessions the small eyed have evaded me despite 4:30am starts. Typically my mate Rob Blondin went one evening, the only time he has fished this year and caught a ray first cast. Of the three rockling I have only managed to land the shore version so far, although I did drop a 3 bearded of around 2lb hauling it up the wall of the inner harbour, that’ll teach me not to use a drop net. I’ve still got the rest of the month to go and these targets will carry till next month when everything goes really quiet as the fish concentrate on spawning. The thick lipped and red mullet may well come in to contention during next tidal cycle; fingers crossed.

Alderney’s fishing consultation process has resulted in the issue of the first green paper for public discussion. It includes suggestions for a netting ban in certain locations for the island, a ban on trawling, log books for charter boats and pleasure vessels. March is the deadline that has been put on this consultation so watch this space or better still the aforementioned States of Alderney website. Please contribute if you wish, details are on the states website or email me on mark@alderneyangling.com and I can forward to you the email addresses you need to write too.

It just leaves me too thank those of you that do visit our beautiful island, the tourism generated is so beneficial to the businesses here and much appreciated. Lots of you have booked up for summer trips which seem so far away when the weather and news is all doom and gloom, but it is only a matter of weeks now until we’re back in full swing.