I’m grinning from ear to ear at the thought of having to write an angling report for Alderney. I could give you full details on a weather report and tell you how many millions of gallons have washed over the 50 foot high Breakwater but I won’t for fear of frightening you off this excellent venue.

Joking aside the weather here has been atrocious, the worst I’ve known since my arrival 6 years ago. The biggest problem is not only the strength but the direction of the wind. Most of the weather has come from the south west which once it attains speeds of over 30 mph it is hitting the ‘pointed’ end of the island thus squeezing wind, waves and swell on both the north and south sides, leaving very little protection even in the lee. 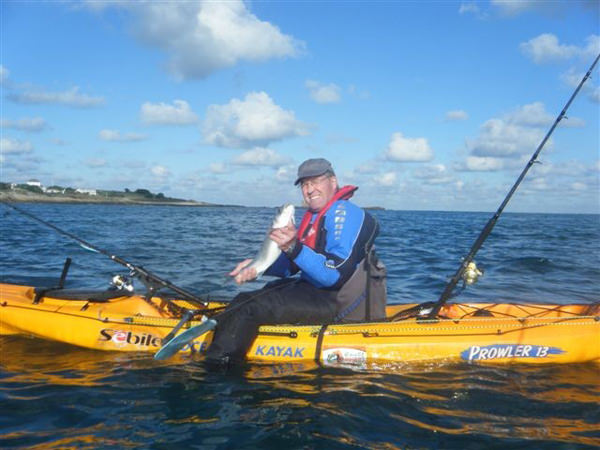 Despite the weather there has been fishing taking place. The best of it has been plugging for bass. It is an easy option with Alderney’s accessible coastline providing access to some cracking marks. The active pluggers are catching up to six fish in a session and even in the harshest conditions one or two fish are being landed. The best plug caught fish recently was a cracker of 8lb 2oz for local lad Chris Eastwood. Chris is enthusiastic with his angling and the bass and mullet are his two quarries.

Mullet have been about with fish to just under 6lb caught. Occasions to target them have been rare as the mullet will always move off to deeper water if they can’t find any sanctuary close to the battered shoreline. However they are quick to return when the seas calm down and around Alderney we are very lucky as the tides flatten the seas almost immediately when the wind drops.

I snatched a day in the kayak on a very calm sunny day to go plugging recently. Mullet were jumping all around the ‘yak as I paddled out. Thinking I had chosen the wrong target fish I was rewarded well with fifteen bass on the plug, fantastic! I could have targeted either species as the mullet stayed in view all day. Next day we had gale force winds, I went to the coastline to watch the mullet jump in the bay, not a fish seen!

There have been one or two good red mullet landed to worm baits. Signs are that the general run of fish this year could be above average as most fish caught so far are weighing in at over the pound mark. Sole are another specimen target at this time of year and there have been a couple of 3lb fish caught. Steve Ace and James Madsen visiting from Bristol had those two cracking fish. The worm baits put down for these species also catch plenty of bass at night too.

Tope have come close to the shoreline as well but opportunities to fish for them have been rare in the heavy swell. Best fish fell to Gary Tucker of Devon. Congers to 38lb have been landed as well and one or two bull huss. I can’t stress how little fishing has been done at night so these fish have been special to see.

Our black bream fishing hasn’t been so good though, neither in numbers nor the quality. During the past couple of years anglers have caught well on the float, terrific sport with fish to 4lb and more but this year it is a struggle to find them over 2lb. Still great sport, but obviously a little disappointing given the high expectations; sometimes we’re not realistic in our thinking.

Night outings have produced fish too with gilthead bream one of the favoured species. These fish are showing more frequently around the island and peeler crab is the main bait for fish to 3lb. Like the couches bream, which we have seen a few, they are terrific scrappers.

Next years festival dates have been set and the week from 2nd to 9th October can be entered in your diary. Time to get flights sorted whilst cheap ones are available and get your accommodation booked. If you need help with this or help with car hire then get in touch.

In the meantime, this is the last report before Christmas, Fieona and I would like to wish you all a very merry one and a prosperous new year. Thanks for reading the reports, they’re a pleasure to do and thank you to all of you that spend your angling hours and heard earned cash on this small island. Merry Christmas.