Alderney shore and boat fishing has been top notch at times. Shore sport is generally brilliant from mid August until at least the New Year, peaking each month on the dark set of spring tides. Darkness inevitability throws up some great bags of fish and better sized specimens, but local knowledge is key.

Shore fishing: Black bream fishing has followed last year with some terrific sport on the float. Float fishing for bream is incredibly effective around the island: groundbait your swim as you would for mullet using the same set-up – a 13’ heavy match rod and 3000-size reel loaded with 6/8lb line; a heavy freshwater style float capable of holding 5 or 6 SSG and a 12lb fluoro hook length.

Mullet currently thin on the ground but catches should rapidly improve as migratory fish from the UK side move to our coastline to gorge for winter. Bags of 3 or 4 fish achievable now, with fish to 6lb tops at the moment.

Night fishing on the beaches with worm will see all manner of species, with sole a popular target. The doormats aren’t around yet but fish to 2lb 8oz evident. Sole less than plentiful short of the next set of tides, but expect possibly 2 or 3 in a session. Red mullet around in good numbers with fish to 2lb… not great fighters but great eating. Worm tipped squid baits best for species variety – expect bass, black bream and odd codling. 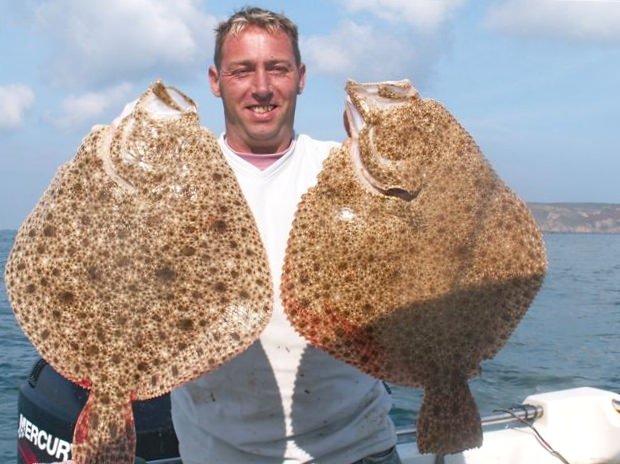 Plenty of bass to dead baits, and plugs and shads moreso in daylight. Best shore bass of late was a personal best for Rob Avery. It weighed 9lb 11oz and took a mackerel head-and-guts bait. Rob unfortunately lost another big fish during the same session. Night tides also producing bull huss to 12lb, conger to 40lb, and some small eyed rays. Huss fishing has been excellent, and this should continue through the next few months if they are targeted.

The breakwater has fished well for a variety of species. The back is faced with deep water and running tides, making it an ideal venue for this time of year when so many species on the move. Conger eels, huss and bass have fallen to live baits and large dead-baits. Some good action in the shallow weed around the wall edge in daylight, which is quite surprising. Several small eyed ray caught from the back of the wall in daytime too. This sort of fishing is probably always there, but it is rare to find anglers prepared to try it due to the wealth of other species and easier venues. Golden grey mullet seem to be around in good numbers with fish to over 2lb caught. On the day of writing one of 2lb 8oz was reported.

Annual Shore Festival: The annual Alderney Shore Fishing Competition takes place from October 25th to November 1st. The event attracts lots of mainland anglers and normally turns out an incredible amount/array of quality fish to demonstrate just how very good the fishing is here. Results and notable catches will be detailed in next month’s report.

Charter boats: Boat activity usually tails right of now, yet it remains first class. The main action comes from visiting UK charter boats, but seasonal weather and inevitable cancellations are a factor for our visitors. Boats including Peace and Plenty, Offshore Rebel and Valkyrie all run on until October and have done well for bream, bass and tope. There has been plenty of fish on the rough ground to keep the anglers busy. Odd large flatfish have turned up as well. Our local boat Smuggler of Braye skippered by Colin Dukes, has also seen some good fishing around the reefs, with some good bass from the Race.

Small boats: Fishing from our own 18’ Raider, we have done a mix of things. One day’s wrecking produced plenty of pollack to 15lb, cod to 12lb and decent ling. We were also smashed by a probable shark. We have had tope on pirks on this particular wreck too! Our best recent flattie pickings returned 3 turbot and a brill – all good fish in the 7-9lb bracket. These flats were sandwiched in the middle of a bass foray, which was also productive but no big fish. We found better bass tight on the rocks using plugging gear. Our best bass trip produced 16 fish and 3 doubles… proper fishing! We have also taken blondes to over 20lb, but unfortunately my buddies lost the best two fish on 30lb gear.

Kayak: Early in the month we did a bit more plugging, but now target the inshore fish on the anchor with our best trip occurring into darkness. Our first yak toping session did not quite work out as planned, with no tope hooked. Being our first tilt, we chose small tides and light winds with safety in mind… these are not ideal tope conditions but you’ve got to start somewhere. I did manage lots of fish and 8 species on my light rod, while the heavier rod carrying live bream and pout baits remained static. Kayak buddies Dick and Matt were with me and managed a huss of 9lb and a strap eel of around 20lb. It’s an enjoyable learning curve and we’ll be trying for tope again very soon.

Keep right up to date with the fishing at www.alderneyangling.com and navigate to the latest reports section.

Until next month, “fine wines!”

Pilgrims to the Saint