Pilgrims to the Saint

Come gale, rain or sunshine, David Storey has journeyed to beautiful St Abbs in the Scottish Borders each year for four decades. His obsession is rooted in spiritual connection with the awe-inspiring location and its fishing.

Every year my brother Rod and I spend a week fishing the south east coast of Scotland. I’ve been coming here for 40 years now and the whole area has a magical appeal, being so different from the flat beaches and shallow water of the north east of England, where I originate. Like most areas of the country the fishing has deteriorated over recent years but it remains a magnet for me in the summer, somewhere to chill out after another year of teaching, my day job. 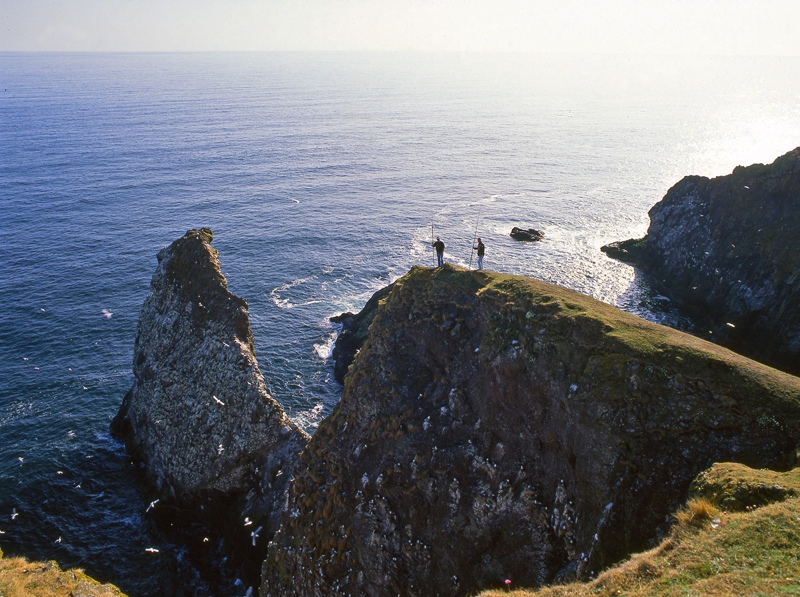 There is a problem with booking a week’s fishing holiday a year in advance, and that’s guaranteeing the weather. Winter provided a succession of westerly winds, with winds off the sea a near constant of summer. However you pays your money so to speak. So school finished on the Friday, much of Saturday was spent driving north from Cannock, and Sunday saw us on the road across the border to St Abbs.

We were fishing by 09:00, huddled on a rock north of St Abbs harbour, which was sheltered to some degree from a strengthening northerly wind and sea. The whole of this area fishes best on a glass-like sea, so this did not bode well. As as low tide came and went the sea came away forcing an early retreat. A couple of wrasse were caught, but the red codling we target in the summer remained absent.

The view from the garden of our digs showed the unfavourable sea state first thing on day two. Even though this is a dangerous place to fish when the sea is rough, the varied shape of the coastline always allows you somewhere to hide away and Rod was able to get fishing around the corner from St Abbs harbour. Once again the only catch was wrasse. 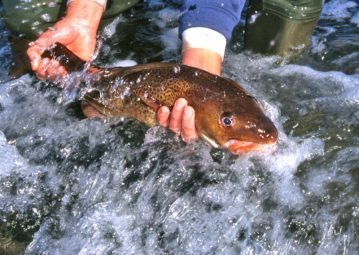 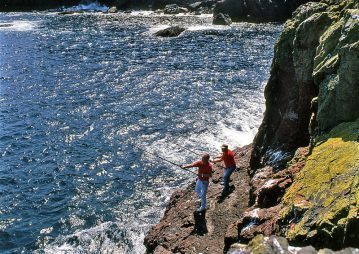 The morning dawned more settled on the third day, with a big lazy roll on. Not ideal but better than before. We chose St Abbs again and after a 200 feet descent we were ready. Rod had one thing to remember… the suntan lotion, which, of course, he forgot, and we picked the only sunny day of the week to be miles from the car. We got absolutely lobstered!

Rod got a fish first cast in 30 feet of water that he struggled to get through the weirs. On the surface the cod looked a good 7 or 8lb but the swell made it impossible to clamber down and lift it out by hand. The only option was to try and bundle it up the rock but the snood snapped and we lost it – serves him right for forgetting the sun tan lotion. It was to prove to be the best fish of the week. Getting progressively redder we caught some good wrasse, up to 4lb, before we were washed off the mark by the flood tide.

Next day, we opted for a change of scenery and fished at Coldingham. First cast produced a small codling, last cast provided a slightly bigger one, and in between not a bite. 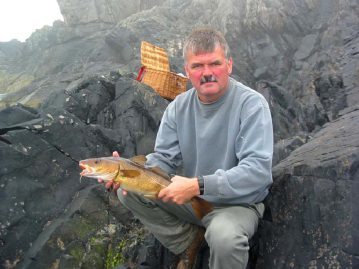 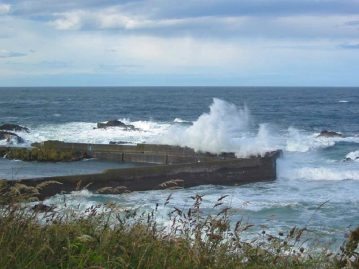 The weather, which had improved steadily, then took a turn for the worst. The northerly wind that had blown throughout the week turned into a dank, miserable south easterly, wetting the rocks and making life decidedly unpleasant. We opted for the deep water of Eyemouth’s Golf Course marks and two fish in the first two casts seemed to suggest a good decision: Rod caught a big poodler (coalfish), while I got a fresh-run codling. We stayed there all day without getting another bite, that despite scrambling up-and-down like rock monkeys, fishing short and long, and mixing up our baits.

All too soon another summer trip was over. Not the most successful excursion we’ve had, but the weather wasn’t kind or conducive to cod. Realistically, if the holiday hadn’t been booked we would have thought twice about fishing in that stew of challenging conditions.

I like to be analytical about my fishing and three things stick in my mind from this year’s trip. Firstly, as last year, almost all the gulls had fledged and gone by the time we arrived. In the past we’ve been shat on by all manner of bird whilst fishing under their nests. It’s eerie when you’re used to hearing the birds screeching away and then all is strangely silent. The only birds nesting were the shags. Global warming? Or, lack of the normally abundant sandeels for the birds to feed on? 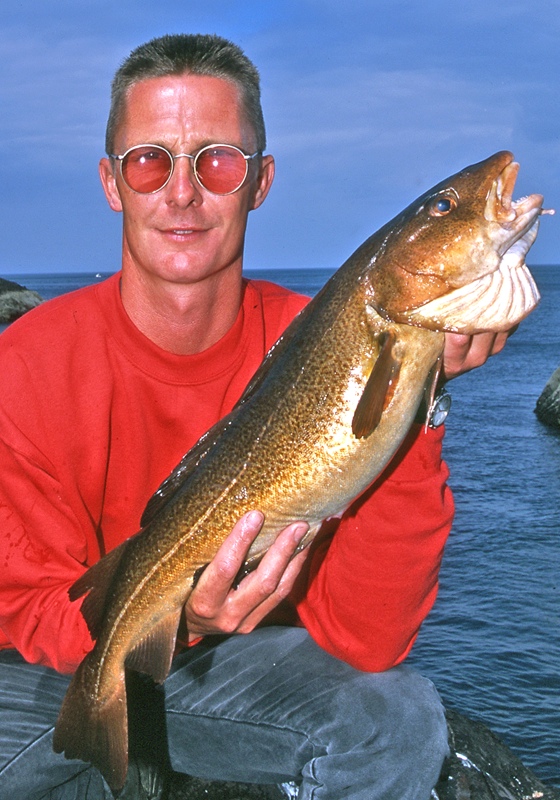 Secondly, the dominant fish this week (and for the last two years) was ballan wrasse. We now catch them in spots we’ve never seen them before, possibly because anglers keep the codling but put the wrasse back, and it takes a while for fish to re-stock the holes and gullies.

Finally we fished five days and on every day we caught a fish first cast. That tells me two things – firstly you’re casting into the right spot – and so I should be after 40 years – and secondly the bait’s okay. The lack of fish after that shows the problems St Abbs and other areas are facing with the limited depth of fish.

Tactically, fishing here is fairly straightforward. Wear good quality boots as it’s steep and the rocks are treacherously slippery in the wet. Ensure your tackle is up to the job – it’s deep water and heavy tackle losses occur all along the coast. I use a three way swivel with a top hook snood about 18″ long and a sinker twice that length. Make sure you’ve some peeler crab. Mix it with mussel or squid, but don’t neglect to carry some crab. Don’t cast too far. As often as not the fish are at your feet. Finally (and sometimes most importantly) DON’T FORGET THE SUNTAN LOTION. 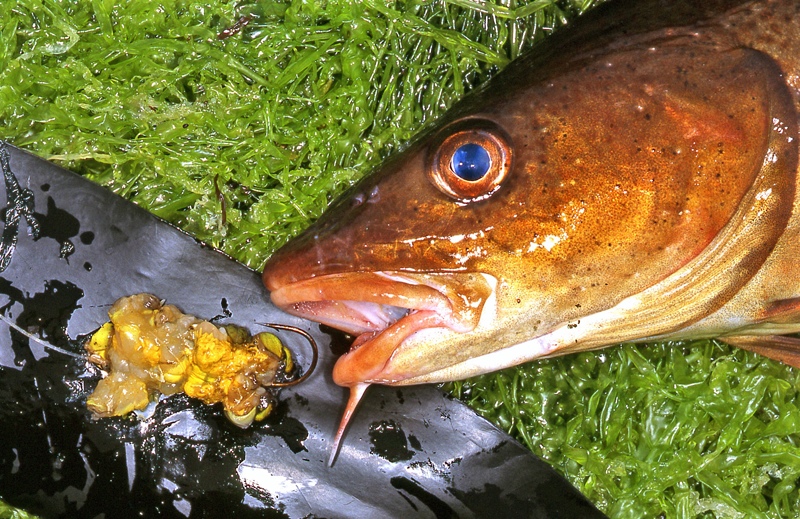 Still, no matter what the weather, anywhere between Burnmouth in the south and Pease Bay to the north remains a physical and fishing challenge I find hard to be dragged away from… we’ve already booked for next year. I wouldn’t miss it for the world.

Discover more about the fishing around St Abbs in David Storey’s book, ‘The Codling Crouch’. Available from Amazon